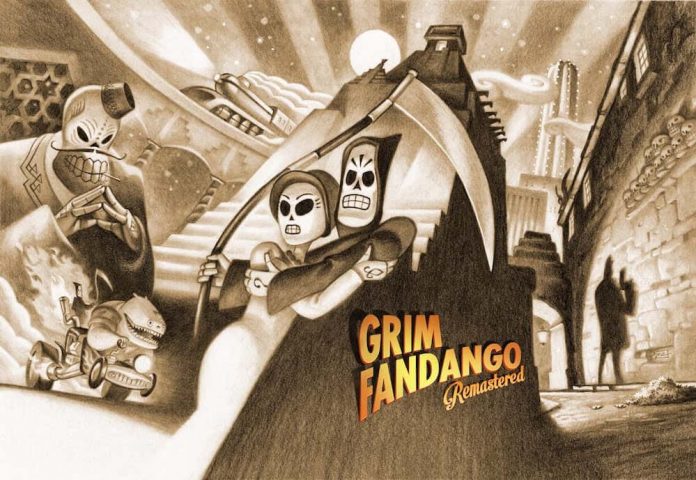 When Grim Fandango Remastered for PlayStation 4 and Vita was announced at last year’s E3, I did a double take.

Really? It was music to my ears! I’d long since assumed that Grim Fandango was one of the many awesome games of my childhood that would forever remain just a memory. It was by far the highlight of E3 2014 for me, and I’ve waited with baited breath for the release ever since.

The game sees you play as lost soul Manny Calavera – stuck in the eighth underworld as a sales rep, selling the recently deceased a travel package to their final resting place. Alas, not all is what it seems with his company: Manny uncovers a crooked plot, and it’s up to him, his trusty sidekick Glottis and a whole host of other colourful characters to reveal his boss and co-workers as the criminals they really are.

Let’s talk a little bit about the original. Grim Fandango came out on PC in 1998 – technologically speaking, that was literally AGES ago. It was well-received when it first came out, and is often regarded as one of the best adventure games of all time. I was the ripe old age of 10 when it was released, and I played the crap out of that game. I loved adventure games, and Grim Fandango was one of the best I ever played. It was a very cleverly written game; the dialogue and characters were hilarious. Manny’s character with his quick wit and his Mexican exclamations was like nothing else we’d seen in a video game before. Glottis was just… well, Glottis. A giant “demon” sidekick who you couldn’t help but love. Every character was so well written, well-voiced and so entirely easy to love.

And you know what? They still are.

Since I loved the game back in 1998, of course I was going to love the game now, 17 years later (ay, Chihuahua!). Remastering a game that’s so highly regarded like Grim Fandango is of course going to have its difficulties. The art style of the game is timeless – the character designs are incredibly imaginative, and the art-deco/film noir-ish settings could never possibly tire, but of course it needed some work to bring it into the 21st century. How far do you go? How much can you leave in without the game looking too dated? It’s a fine line to tow – you need to keep the original fans happy by keeping the game just as they remembered it, but you also need to bring it up to date so that newcomers to the game don’t feel alienated.

I think Double Fine hit the mark quite well. Visual-wise, all of the character models have been sharpened with new hi-resolution textures and the lighting has been given a fairly big overhaul. Some of the background textures have been cleaned up, but everything else remains largely unchanged. It feels cleaner and sharper throughout, but at times some areas of the game look very rough. When I booted up the game, I exclaimed “it looks exactly the same as I remember it” – then I hit the R3 stick in to toggle back to the original rendering of the game, and… oh. Yes, the improvements are visible, and they’ve done a good job in not going too far with retexturing things, but I’d have liked to have seen a little more work on some of the backgrounds.

Being able to toggle between the original and the remaster is a nice touch that’s been added in. There’s lots of nice little “extras” thrown in, such as the ability to change your control scheme to the original “tank” controls or the new camera relative controls. (Tank controls come tied to a gold trophy. I was going for platinum glory…. so tank for me it was! Actually, after about 30 seconds of me going “Manny, where are you going? Manny, oh my god, go over here.. no not there.. OH MY GOD!”…. I did get used to it. It soon felt natural, but of course, if you’re new to the game, then the camera-relative controls will feel less alien and easier to get along with.) There’s also some special features in the menu, including a gallery of concept art, which is awesome, and the ability to listen to director’s commentary as you play.

The remaster comes with a new live  score, recorded by the Melbourne Symphony Orchestra. I’d love to be able to hear what this sounds like against the original, as it doesn’t sound that different from how I remember it (but we have a tendency to upscale things in our memories anyway…), but the music is awesome nonetheless. It complements the setting of the game perfectly, and the changes in tempo as the game progresses through major plot points really sets the pace. (I especially liked Glottis’ rendition of Rusty Anchor. Which has been permanently stuck in my head all morning. Oh I’ve got a rusty anchor…)

There were a few gripes whilst playing the game. The main one is a lack of autosave. Okay, maybe it was a conscious decision in order to keep the game as much like the original as possible…. but in this day and age, PEOPLE NEED AUTOSAVE! Seriously, I think our warped gaming minds have become so accustomed to our games saving by themselves, so needing to remember to jump to the menu every so often feels a bit archaic – and it just interrupts the flow of the game, too. There also needs to be a prompt on the menus – it’s easy to click “load game” or “new game” instead of save game – a little “ARE YOU SURE?” pop up wouldn’t go amiss here. Trust us, it happens. In the true style of the adventure-puzzle game, sometimes your objectives can be a little obscure and well, it’s hard to know what to do. By a long shot, it’s not the most difficult of this type of game, and a lot of the time you can work things out fairly easily, but Grim Fandango does occasionally make the same pitfalls that a lot of games in the genre do. You will come to a point in the game – perhaps more than once – where you have no idea what to do. Without walking around endlessly for hours, trying every action and trying to use every one of your items on all parts of the environment, some paths just aren’t clear and it can be a little frustrating. I suppose in the age of the internet it’s not too much an issue because a quick Google search will enlighten you – but an in-game subtle hints system would be a nice touch, so you don’t have to resort to “cheating” to find out the answer.

Grim Fandango Remastered definitely has a set target audience – and that’s the people who played and loved the games on its original release. Whilst it’s been cleaned up enough to make it accessible to everybody, I think that only people who are already familiar with the game are going to truly appreciate it. The updates of the remaster make it an attractive proposition for those that have never played its original release, but for me, there’s something so wonderfully nostalgic about playing it that I can’t imagine what it would be like playing it for the first time today. I mean, I’m glad that a new generation will get to enjoy it, because ¡Híjole Mano!, everyone should play and love Grim Fandango; I just hope it stands up as well on its own in 2015 as it did in 1998.

All things considered, you’ll be hard-pushed to find a better-written game than Grim Fandango. The humour is clever, well-thought out and well delivered. The voice acting has stood the test of time and is still stands out better than most things made today. Manny and co will keep you chuckling without the jokes ever becoming too forced or contrived. No, it’s not the best looking game on the market. It’s blocky and grainy, and whilst some parts could have been touched up a little more – it has not lost any of the original charm that Grim Fandango had. It’s still a visual pleasure; the colours, art styles and settings are still very welcome in their uniqueness.

Grim Fandango Remastered is available digitally on PS4 and PS Vita. We reviewed the PS4 version.