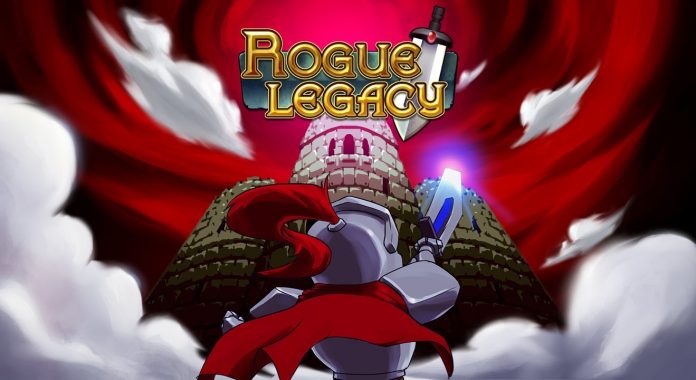 It’s rare that we find an indie game that gets as much screen time for us as a major release, so when one comes along that we somehow just can’t put down, you know it’s something rather special. That’s what we found with Cellar Door Games’ Rogue Legacy, and that’s why it earned a place in our Top 10 Games of 2014 list.

I’ll admit, when I first saw it on the store, my thoughts were something along the lines of “oh great, yet another game with graphics from the 90s. Just what I’ve always wanted”.

I ate my words. I ate every last one of them. Chewed them up and swallowed them right down to the pit of my stomach.

I’ll admit I’m not a massive fan of the rise in throwback 16-bit style graphics these days. I abandoned my SNES in 1995 so when, 20 years later, I’m still being bombarded by a multitude of indie games that look something straight off a cartridge, I can’t help but groan.

Somehow Rogue Legacy has managed to make me overlook that fact. I don’t care that the seven year old version of me probably had nicer looking games back in her day. I don’t care that the soundtrack is made up of annoying, repetitive midi music. You don’t play Rogue Legacy for impeccable graphics and Emmy award-worthy musical scores. You play it because you just can’t put it down. No matter how hard you try. Once you’ve started playing Rogue Legacy you may as well kiss goodbye to your productivity for a while, because that controller is not leaving your hands any time soon, no sir-ee.

The brilliance of the game is actually in its simplicity. You’re a knight. You rock up to a castle to kill some baddies. You get some gold. You die. That’s basically it. Except every time you die (and it’s inevitable; you’ll die a lot, and quickly) you respawn as your last knight’s “child”.

The quirk of Rogue Legacy is that every character is unique. You’ll never play as the same character twice. There’s several different classes, each with their own strengths and weaknesses, and within each of those classes, every character generates with distinctive traits. One time you might be a female barbarian with dwarfism and tourettes (yes, really. Expect a lot of text bubbles with expletives – censored, of course!). Another time you might be a bald male paladin with no sensation in your feet. Each character trait has an effect on your playthrough, too. You might be near-sighted, so everything out of a couple-metre radius of your character is blurry. You might have OCD, so you can’t walk past an object without first hitting it. You might have amnesia, so you can’t remember where you’ve been (i.e. your map becomes defunct). Some of the traits are annoying as sin, but others are useful – either way, it’s a great way of keeping the gameplay varied.

The gameplay itself is simple and fun. There’s no complicated button mapping to fathom – you just need to walk, jump and attack. It’s difficult though – without levelling up your character, you’ll die quickly (but that’s okay, it’s meant to happen!). Every time you die, you’ll keep whatever coins you’ve collected in your play through, and you can use these to level up, and to buy new items. Levelling and items are passed on through the generations, so every character will benefit from these.

The aim is to defeat each boss in the castle. There’s four distinct areas, each with their own enemies, settings and their own boss. Each has its own difficulty level. Once you’ve defeated a boss it stays dead on future games, so you don’t have to defeat all four on one playthrough.

It doesn’t end there, either.  Once you’ve beat the game,  it starts all over again: typical new game plus style, with a higher difficulty and tougher enemies.

And what else do we love about this game?  It has a full trophy list on PlayStation. Yes! We can’t stress enough how much this pleases us, as self-proclaimed “trophy whores”… more games, please take note!

All in all, Rogue Legacy was a risk I’m glad I took. I was very pleasantly surprised with what the game delivered, and consequently sunk a lot of hours into this little gem. It heeds a warning though: don’t attempt to play Rogue Legacy if you’re not willing to sacrifice your life to it for a week or two. We lost count of how many times we said “just one more game…”, and many nights it was 2 a.m. or later by the time we finally turned off our console, long after “one quick go” had turned into an epic marathon.

Rogue Legacy makes you stop looking at a game for its artistic merit – and don’t get me wrong here, I’m not saying it looks awful – it looks just like it intended to look – but you can’t exactly compare its graphics to something like Creed: Unity, per se.  And maybe that’s not a bad thing. Sometimes it’s good to strip everything back to the very core of what any game should be: a fun, addictive piece of entertainment that you enjoy playing. Put aside the arguments over whether something is 1080p or runs at 60fps, and just sit back and enjoy something simple yet great.