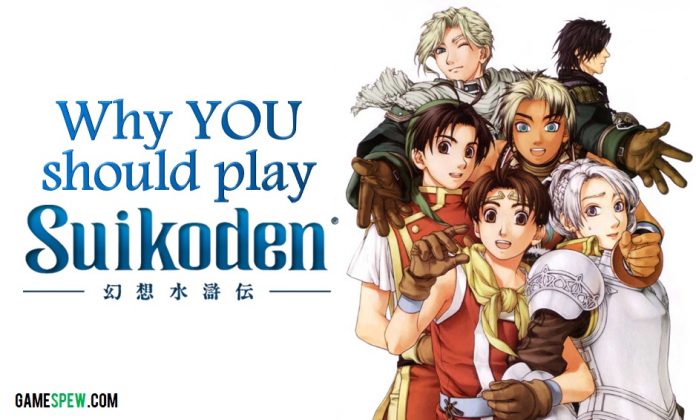 I have a problem. I collect JRPGs. I will assuredly never finish at least 90% of them. In fact, the majority of them are still factory sealed. And you know what? A little game called Suikoden is to blame.

Released in the UK in March 1997, games like Suikoden were alien to me at the time.

Growing up, games had always been simple affairs with non-existent stories and catchy but repetitive music. My time had been wasted playing rip-offs of arcade classics on an Acorn Electron before becoming engrossed with Sonic The Hedgehog on the Sega Master System that I had received for Christmas. Even years later, when I upgraded my Sega Master System for a Sega Mega Drive, games had not changed. Sure, they looked nicer and the music was a bit kinder on the ears, but they were still shallow, unable to elicit emotion or make you question your morals and views on the world. Then, in 1997, having traded my Sega Mega Drive and my ample collection of games for a Sony PlayStation, I stumbled upon a copy of Suikoden and my view of games was changed forever.

Suikoden places you in the shoes of the son of Teo McDohl, one of the Scarlet Moon Empire’s Great Generals. Leaving to head up battle in the northlands, Teo entrusts you into the care of the your close friends including the family’s servant, Gremio, as you embark upon your new career within the Imperial Army. It doesn’t take long, however, for you to discover that corruption is setting into the heart of the Empire, creating civil unrest.

The true treachery of those in control of the Scarlet Moon Empire is revealed when Ted, your best friend, is forced to use a mysterious power to save his entourage when confronted with great peril. On his deathbed, Ted explains the power is granted by a rune he possesses and bestows it upon you, asking you to protect it at all costs. When soldiers of the Empire subsequently come knocking at the door demanding Ted to be handed over, it is clear that your life is no longer safe, with the Empire ready to do anything necessary to obtain the power of the rune.

It is at this point that the true story of Suikoden begins.

On the run from the soldiers of the Empire, you find yourself within the company of a band of rebels intent on liberating the Empire from its corrupt leaders. It quickly becomes clear that you, as one of the 108 fabled Stars of Destiny, may be pivotal to the rebel army achieving its goals, and after assuming leadership set out on a journey to recruit the remaining 107 stars. Along the way, you must acquire and develop headquarters, act as a diplomatic envoy to form allegiances, and seek out and develop experimental weapons in order to topple the corrupt Empire.

The story of Suikoden is what set the game apart from all others for me when I was a child. It is obviously fantastical with its magic and dragons, but the crux of the story is a very grounded, human tale – of corruption, politics and friendship. The idea of joining and building an army of rebels, fighting for a just cause, resonated with me, instilling a feeling of justice. While most JRPGs still to this day run with the clichéd premise of stopping a nefarious villain before they can destroy the world and create a new one in their image, Suikoden‘s premise is to just simply topple an Empire.

Bolstering the game’s solid story is one of the greatest game soundtracks ever created. Each of the game’s sumptuous tracks fits the location or situation it is used perfectly, creating the perfect mood and emotions for the events unfolding.

With 107 Stars of Destiny to recruit, it’s pleasing that the game allows you a party of six characters. Its turn-based battle system is a simple yet gratifying affair, with the only real depth being the “Unite” system which enables characters with bonds to attack co-operatively. The frequent random battles would grate, but the game respects your time, allowing battles to be over in a matter of seconds with the use of the Free Will command. Major conflicts have a separate battle system, where characters are placed into battalions and large scale warfare plays out like a game of rock, paper, scissors. Character deaths are also permanent in these battles, ramping up the tension and sense of urgency.

To this day, Suikoden stands unsurpassed in the genre to me. I collect JRPGs not only because I like their immersive worlds, but because I’m always hoping that maybe one will make me feel the same way that I did playing Suikoden back in 1997. The great Final Fantasy VII came close, but Suikoden still remains at the top of the list of my favourite games of all time. This is why, having been released on the EU PSN store for a measly £3.99, you should buy it today. Hopefully, you’ll enjoy it just as much as I did.

Oh, and pick up it’s superb sequel at the same time. You wont regret it!