I played Saints Row for the first time this weekend, in the form of the DLC expansion pack for the fourth game.

Perhaps unorthodox, but since Gat Out of Hell is a standalone expansion (and can be purchased and played without owning Saints Row IV) there’s no reason you can’t enjoy it without knowing anything about Saints Row in general. And enjoy it I did.

You play as Johnny Gat, accompanied by Kinzie, on a journey to hell… to punch the devil. You can switch characters at any time, and as we were playing in co-op, player 2 is automatically assigned to Kinzie. Co-op is fun, as both of you can run around separately, working on your own challenges, but when it comes to missions, both of you will be brought together. We had quite a bit of difficulty connecting in online co-op, so had to set up a LAN to be able to join each other’s games (easy enough when our PS4s are side-by-side, but would have been an issue otherwise). It may have been to do with our internet connection settings, but since no other game has given us any real problems, it’s worth mentioning.

Being that this is a standalone add-on for Saints Row IV, of course there’s not going to be tons of gameplay. The story takes probably no more than 2-3 hours to get through, but there is a wealth of side activities, collectibles, and challenges to extend its longevity. We played for a good 7 or 8 hours, obtaining all the collectibles and completing all the activities to gold level. There’s a trophy for spending 20 hours in hell, and whilst there’s more random stuff we could do in terms of challenges and unlocking trophies, it would be very grindy to spend another 10-12 hours playing. As much as I like trophies, and as fun as the game is, there isn’t that much to see or do to warrant spending 20 hours playing.

It does have a platinum trophy – for all you fellow trophy hunters out there, rejoice! Excellent news for standalone DLC. It means if you’ve bought Gat Out of Hell as a bundle with Saints Row IV as intended, you get two platinum trophies for the price of one. Huzzah! 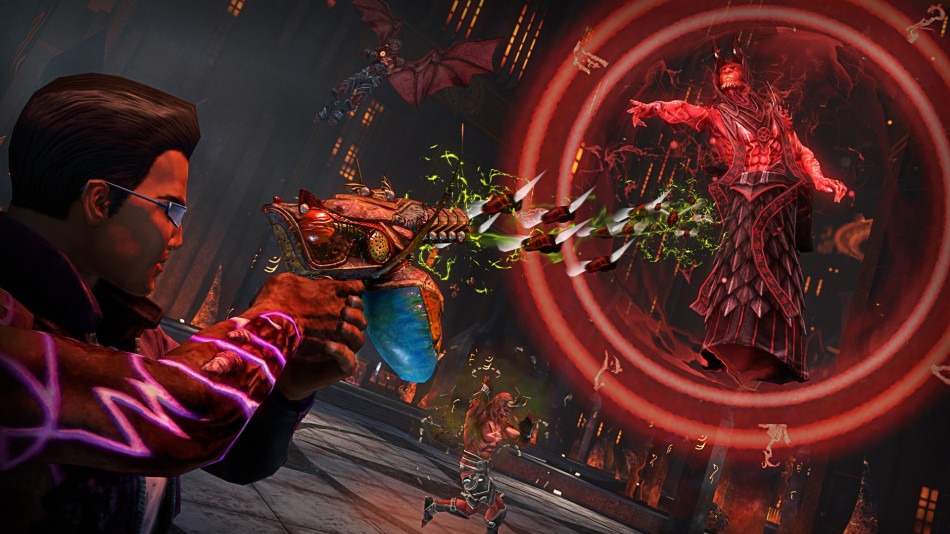 Back to the game itself. Above anything else, it’s fun; so very entertaining to play. It’s open world, so you can wander freely from one activity to another, and do whatever you want in whatever order. There’s plenty of comedy thrown in too, of course. My personal highlight was a musical number between Satan and his daughter, but I won’t ruin it too much for you. The missions and activities themselves are pretty fun – the bulk of the game is more or less a series of minigames – flying through targets against the clock, wreaking havoc with a grenade launcher to cause as much damage as possible, and batting minions through targets to name a few. They’re fun (and easy), and even though there’s only four or five different types of missions, they don’t get boring for the duration of the game.

We did encounter plenty of glitches in the game though. It crashed on us both at least twice each. The totals for various challenges were all over the place, and some of them seemed to reset after quitting the game. Once an enemy spawned and got stuck in a building, and as we couldn’t kill him, no more enemies could appear, so we had to restart the game to fix it. It once started a mission (where the goal was to kill enemies) with no enemies on the map. Overall, they were minor glitches, but enough to cause moderate frustration. 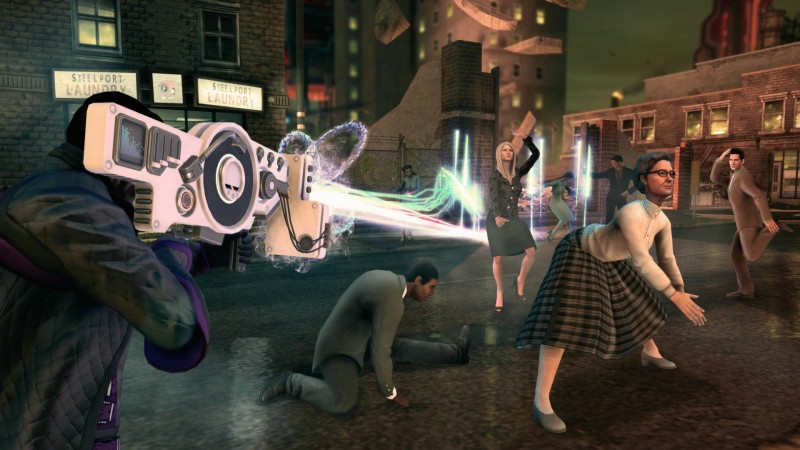 Graphically, Gat Out of Hell isn’t anything to shout about. It’s markedly last-gen – not surprising since Saints Row IV was a last-gen release. Still, it’s disappointing that not much work has been done on enhancing it for the current gen version. That said, the visuals don’t really take anything away from the game. Sure, we all love top-notch cutting edge graphics, but it hardly looks bad, and it’s fun, and that’s the main thing here.

Yes, fun is key in Gat Out of Hell, and in fact, I enjoyed it so much that I’ve now purchased the full game of Saints Row IV so we can also play through that in co-op. It’s a solid expansion pack, with plenty of content for something that retails at £15. It’s a shame it’s hindered slightly by the few glitches that aggravated an otherwise fun way to spend a few hours, but it certainly hasn’t put me off wanting to play it.

Gat Out of Hell is available as a standalone digital download or as a bundle on disc with Saints Row IV. It’s available on PS3, PS4, Xbox 360, Xbox One and PC. We reviewed the PlayStation 4 version.