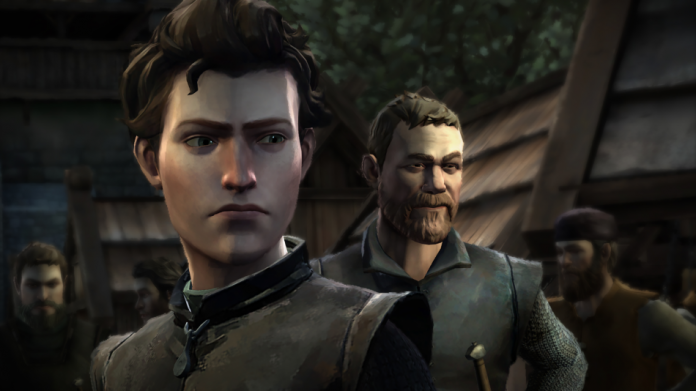 Since episode 2 is released this week, I thought I better get myself into gear and finally get around to playing episode 1 of Telltale’s highly anticipated Game of Thrones episodic title.

Telltale have a very strong reputation of delivering high quality story-driven adventure games, and well, HBO’s Game of Thrones is the biggest thing to hit TV since, well, ever.

Without beating around the bush, I was bitterly disappointed.

Don’t get me wrong, I know a lot – a lot – of people who adore Telltale games and probably think they’re the best things ever. Call me sceptical, but I don’t share the view . With quite a hefty back catalogue now, including Sam & Max, Tales of Monkey Island and Back to the Future, you’d expect to see incremental improvements between every release. The Walking Dead‘s release in 2012 was perhaps the game that pushed Telltale into the major limelight and hurled them into a whirlwind of hype. It was a good game, but in my eyes, it didn’t live up to the hype – and sadly the same pitfalls it encountered back then still befall Telltale games of today.

Okay, I’ll try leave my overall ambivalence for Telltale Games at the door and focus on the game at hand, Game of Thrones. Episode 1 took just under 90 minutes to get through. A little on the short side. This is partly because the fact of having played a few Telltale games in the past, I now know it makes no difference whether you explore your environments or not. So I didn’t bother, I did what I had to do and did no wandering off course. That said, Game of Thrones episode 1 barely gives you chance to wander off course anyway. There are maybe three short scenes where you actually control your character; the rest is simply responding to dialogue prompts. Not necessarily a bad thing, I suppose, as this does make sure that the pace of the game is kept up and helps it feel a little more like an actual episode of GoT.

But it didn’t feel like an episode of Game of Thrones at all. It felt, at best, a poor impersonation – even with the inclusion of voice acting from the proper cast. Their characters felt downplayed, and their performances were nowhere near on par with what we’re used to seeing on TV. As for the new characters – the family you play as, the Forresters – they’re a pretty bland set of people. No real character development is given for the family. You play as three separate members, and none of which I cared for – I didn’t know enough about them to care. They were very two-dimensional and, well, boring. Their dialogue was stilted and drab, and there wasn’t much personality coming through for any of them. Sure, they looked the part, and I’m sure they’d have fitted in nicely in the background of Westeros somewhere, but as the main characters guiding you through this story, they certainly needed a lot more to them. Still, this is only episode 1 – I’m not writing them off completely yet, but I really hope a little more depth is given to the characters in the next installment.

The dialogue little forced at times, too. There’s quite a lot of effin’ and jeffin’ thrown in there (and even – dare I even say it – the “c” word makes an appearance), and for the most part, it doesn’t feel very natural. Yes, there’s a lot of bad language in the TV programme, but it feels right there. In Telltale’s version, it feels like it’s just been added in because it has to be, and somehow it doesn’t quite gel. Perhaps the cartoon-like graphics are just too harsh a contrast for such strong profanities.

The biggest downfall for me in playing Game of Thrones was the graphics. I get that Telltale usually go for a comic book effect in their games, and usually, that works. After all, The Walking Dead was a comic book, so that makes sense. The Wolf Among Us is about fairy tale characters, so a hand-drawn effect works nicely there too. But in Game of Thrones? A very dark and very real feeling world? The hand-painted effect here just didn’t work. At times, it felt very dated and very much behind on times. It seems that the graphical quality of their games hasn’t really moved along at all in the last five years, and with the new generation of consoles and the speed at which other games are graphically enhancing, Telltale really need to keep up with the pace. I’d have enjoyed Game of Thrones a lot better if the art style had at least tried to be realistic. It felt jagged and unpolished, and the animations were poor. On a positive note, it did at least run smoothly with no stuttering. I can’t really comment on the handling of the controls here, as you barely get to control the characters at all. It seemed fine in the few scenes where you do get to walk around, and the one quicktime event you have to do seemed responsive enough. Yes, one quicktime event. I can’t yet decide if this is good or bad. There were perhaps too many of these in previous games – but at least being given button prompts helps give the impression that you’re in control here. I felt more like a spectator than a player – and whilst I imagine that is partly the intention, it makes it harder to fully immerse yourself in the game.

All in all, a pretty mediocre first episode of something that should have delivered greatness. Yes, there’s going to be five more episodes, so it’s too early to dismiss the entire game, but sadly I’m not excited for the next instalment. I want to be, and I hope the next chapter changes my mind, but at the moment, the characters don’t grab me and make me want to know what’s going to happen. The graphics don’t make me want to dive back in, and even the official voice actors don’t hold enough value to make me return. I still will, but I can only hope something gives in episode 2.

Telltale’s Game of Thrones Episode 1 is available on PS4, PS3, Xbox One, Xbox 360 and PC. We reviewed the PS4 version.