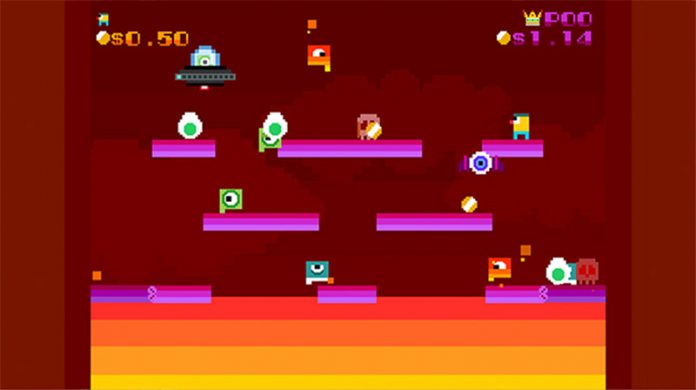 Yet another retro style game on the retro style bandwagon, that no doubt has been hyped up far beyond its own capability. But I gave it a go all the same; its whopping 50mb download size managing to squeeze onto my very full Vita memory card.

I booted it up, was greeted by some funky NES-sounding music, and hit start.

Then I lost an hour of my life.

The best merit any handheld game can have, in my opinion, is how addictive it is. Sure, you can get settled in for the night with the likes of Uncharted or Assassin’s Creed on the Vita, but sometimes you just want to be able to pick something up for a quick go, without having to worry about following complex story lines and dealing with fiddly controls. And that’s exactly what Woah Dave! offers you. There is absolutely nothing complicated or deep about the game – and that works totally in its favour.

The game itself is one fixed screen – think Donkey Kong or the Original Mario Bros. You play as, I assume, Dave, a pixelated thing who jumps from platform to platform, surviving as long as possible. Dave’s under attack from an endless barrage of strange creatures and explosives, who start as eggs then hatch and level up every time they reach the bottom of the screen. It’s your job to destroy these creatures, either by throwing eggs at them, or using exploding skulls. Every time you kill something, you get a coin. The aim of the game is to collect as many coins as you possibly can. And there lies the addictiveness of this simple little game. You always want more coins. You die after five minutes with 99 coins – so you say to yourself, man, I’ve got to get to 100 coins! Next time you get to 163 coins – so you need to push it up to 200. And so on and so forth. Ergo your “quick five minute game” ends up  being an hour-long marathon of egg-throwing, coin-collecting chaotic fun.

It’s a very simple game, but it’s not easy. The enemy drop rate is relentless, and just when you think you’ve nailed it, it’ll turn up the crazy by a notch or two. UFOs? Rising lava? Platforms disappearing? Tick, tick, tick. I discovered within about a minute why the game is called what is it, when I was bombarded by enemies and loudly proclaimed “woaaahh!” Unless you’re some kind of Woah Dave! super-wizard, a game will last you probably no more than five to 10 minutes before you’re dead, it’s that quick paced. The first few times you’ll probably die in around 30 seconds (unless that’s just me and my utter lack of skillage…), but as I keep stressing: it makes you want to play, again and again. You don’t reach a point where you think “I can’t take any more of this”. Heck, I only turned it off because I had a review to write! I’m always grateful when these indie mobile games get ported to Vita. It needs more of them – these little games help keep the Vita alive, and that’s a good thing. Sure, lots of people are happy to play games on their mobile phones, but for me, you can’t beat having an actual control pad in your hands.

Woah Dave! is just pure addictive fun. And what is a game if it’s not fun to play? It’s a game that anyone can pick up and give a go, no matter how “big” a gamer they are. In the age of realism, deep story lines and over-complicated controls, accessibility is not something to scoff at.

Whoa Dave! is available digitally on PS4, PS Vita, PC, Wii U and 3DS. We reviewed the PS Vita version.