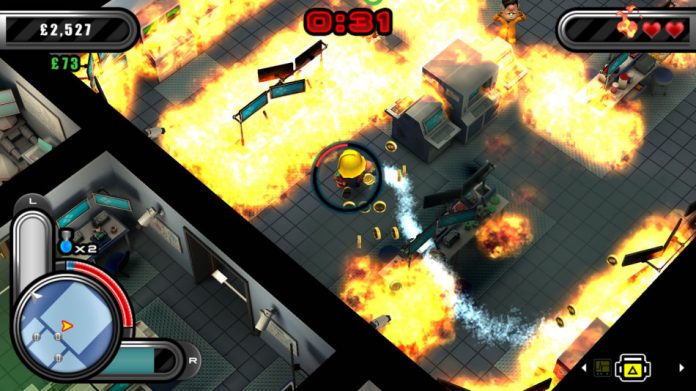 Flame Over is the newest Vita game from Laughing Jackal, the indie company that brought us the likes of Hungry Giraffe and OMG! HD Zombies.

As the title may suggest, Flame Over has a lot of fire in it. You play as Blaze, a firefighter, tasked with the job of extinguishing all the fires that are blazing through a burning office block. The level ends when you’ve put out all the fires, but there’s people – and cats – to save on the way and mini tasks to complete. Saving people grants you extra time on the clock, cats grant you an extra heart, and the missions grant you tokens which allow you to buy upgrades next time you play.

Flame Over is a “rogue-like” title, in that you’re constantly battling through the same areas in order to gain upgrades to get further next time. The difference is, instead of fighting monsters, you’re fighting fires. And instead of firing a gun and throwing grenades, you’re spraying water and chucking water bombs.

The first thing to note about Flame Over is that it’s hard. Frustratingly so, in fact. It took me about 15 attempts of playing just to get anywhere near completing the first level. There’s a lot of things that take a while to get used to. The game is entirely top-down, and you can revolve the camera angle 360 degrees by using the right analog stick. Trouble is, this is also what you use to aim when you’re shooting. You can’t shoot and change the camera angle at the same time, and the camera is very sensitive. You do eventually adjust to it, but it took me four or five playthroughs of feeling a little bit motion sick from constantly accidentally rotating the camera all the way around.

There’s also not much guidance in the game. You’re literally thrown into the fire, with the only brief instruction being “you’ve got five minutes to put out all the fires”. The controls – L and R shoulder buttons to shoot water and foam – are pointed out, but other than that, you’re on your own. Between each loading screen you get “hints and tips”, but some kind of brief tutorial level would have been a nice touch just to ease people in.

Once you overcome the difficulty of the game and get the hang of the best way to tackle the fires, the game does get more enjoyable. It looks nice – the graphics are sharp and vivid, though the rooms do get repetitive (but such is the nature of a rogue-like game). The music is catchy, but fairly generic – and as the same tune is played again and again, prepare for it to be stuck in your head for quite some time after playing. The difficulty of the game does mean that once you complete a level, you do feel a genuine sense of achievement. It makes you want to keep playing in order to get just that little bit further, or get just one more upgrade.

As you progress through the level and put out more fires, you gain money. The money doesn’t carry over once you die, so you’re encouraged to spend it. You can spend it on items in-game at a shop that appears on the map every second level, or you can use it to buy permanent upgrades before you start your next run through. Before you can purchase the upgrades though, you have to unlock them by collecting tokens – which can only be done by completing the missions within the level. The game doesn’t really make this known anywhere, so the first few times I played it was frustrating as to way it wouldn’t let me spend any money, even though the prompt says to spend as much as you can as money doesn’t carry over.

Whilst the difficulty of the game is an integral part of Flame Over, it’s also what holds it back. The overall feel of the game is very much casual – it has a very simple premise, simple controls and it gives the impression of being something that anyone can pick up and play. And whilst it’s true, anybody can pick it up and have a go, there’s probably not that many casual gamers that would have the perseverance to get to grips with the game. The demographic of the game seems a little confused; one the one hand, it’s the kind of title that all the family can have a go at, but on the other, the difficulty is something that only hardcore gamers are really going to overcome. Perhaps this is a sweeping generalisation, but how many hardcore gamers are really going to be interested as playing as a little yellow fireman and his hosepipe? It just seems a shame that the majority of players are likely never going to see past the first or second environment.

A sliding difficulty scale would be a welcome addition and would make the game more appealing to the casual gamer market, which the game seems targeted towards. A bit more of an introduction and a quick training level would also be helpful – the “hints and tips” the game gives you are handy, but some of those things should be laid out to you before you start playing. The long loading times of the game are also a bit of a hindrance – you want to be able to quickly dip in and out of any repetitive rogue-like, but the long wait time between every attempt interrupts the flow of the game.

The bottom line is, Flame Over can be fun to play, but you need to have a lot of patience – and a lot of skill. There are a few problems that hold it back from being an essential title, but if you like a challenge – and if you like firemen – then it’s worth a go, but unless you’re really determined, it’s likely to get old pretty quickly.

Flame Over is available on PS Vita, PS4 and PC. We reviewed the PS Vita version. 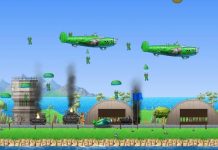