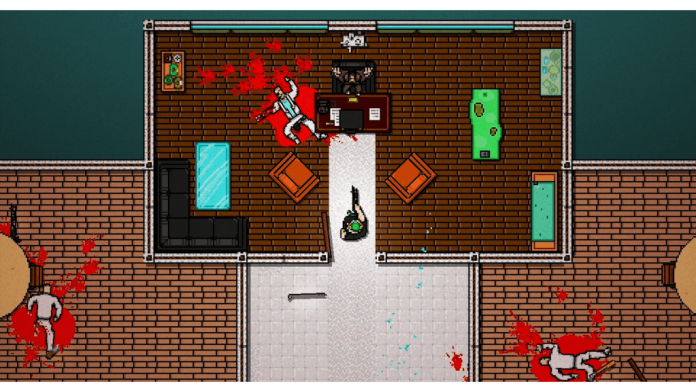 When Dennaton released their David Refn’s Drive-inspired Hotline Miami for PC late in 2012, it was a resounding hit; combining ultraviolent carnage with arcade gameplay and a mesmerising 80’s inspired soundtrack. Now they’re back and hoping to recreate that success with a sequel that is bigger, bolder and in many ways, better.

Hotline Miami 2: Wrong Number is a brutally difficult game. From the get go, the game is insanely challenging – even more so than the original. Make no mistake about it: you will die, die and then die again as you strive to make progress through the game’s 25-scene campaign. Gameplay is simple; clear the level of enemies as efficiently as possible before moving on the next, until the stage has been completed. Unfortunately, one hit is all that it takes to kill you – and the odds are insurmountably stacked against you. Just like the original title however, the gameplay here is so tight and succinctly created that when you die you (mostly) accept that it’s your fault and try again, adjusting your strategy or trying to stay more focused to overcome the challenge at hand. It helps that upon your death you are instantly placed at the beginning of the level so you can get right back into the action, creating a cathartic loop of murder and death until you are victorious.

Whilst stages in Hotline Miami were short and snappy, Hotline Miami 2 frequently carves up maps that are huge in comparison. However, bigger doesn’t necessarily mean better: as a result, the pace of the game can feel hindered at times – you have to play more timidly due to the fear of the unknown (or rather, unseen). It also doesn’t help that these maps also usually feature an unprecedented amount of enemies. For many players, these areas could prove to be too frustrating; clearing a room of 99% of its inhabitants only to get killed by an enemy that was hidden off screen is very demoralising. During my playthrough I used the “spray and pray” tactic quite often into open, unknown territory which felt cheap, but was the only reliable way to thin the enemies’ numbers on these levels to make them manageable.

A multitude of weapons are available to dispatch your foes, each with their own benefits and weaknesses, but they must generally be procured on site. Guns were my favoured choice, especially the shotgun with its useful spread damage, but whilst they are effective at killing from a safe distance they also alert enemies of your presence, creating further danger. Melee weapons on the other hand are silent, but require more cunning and guile to overcome your foes. To complicate matters some enemy types are impervious to certain weapons, forcing you to think on your feet and switch up your tactics. The game’s focus on narrative also means that you’ll take control of nine characters throughout the campaign, many of which have their own perks or gameplay caveats. The writer, for example, refuses to use guns, whilst the soldier starts with both a melee weapon and a firearm but is unable replace them. Fans of the original title will be saddened to hear that Wrong Number features a drastically reduced number of selectable masks.

Graphically, the game has not changed much since Hotline Miami but it doesn’t really matter; the 2D sprites and environments have charm and are carried by some exceptional presentation. The VCR-style pause menu and effects are a very neat touch. Music is also once again superb throughout. The synthy, high tempo soundtrack is almost worth the price of admission alone and will keep you tapping your feet as you murder, die, restart and murder again.

Hotline Miami 2: Wrong Number is a somewhat flawed masterpiece. Addictive and brutal, it often walks the line between making you feel a sense of accomplishment and disdain. Whilst it goes out of its way to be grander than the original (and on the whole succeeds), its bigger levels and erratic difficulty unfortunately separate it from its predecessor unfavourably. Those with balls of steel and razor sharp wits will find this title immeasurably enjoyable, but those without may be driven to the end of their tether.

Hotline Miami 2 is available to buy digitally on PlayStation 4, PlayStation 3, PS Vita and PC. We reviewed the PS4 version of the game.