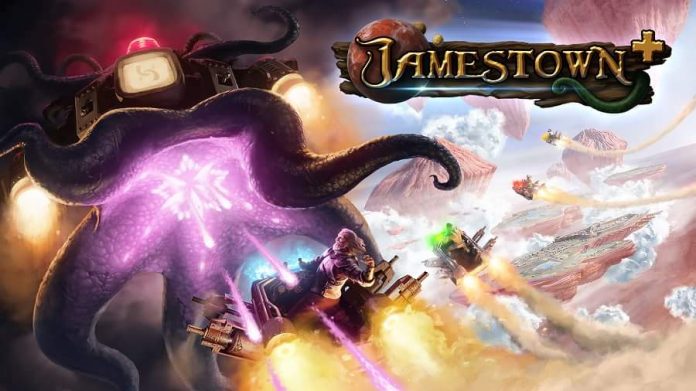 Jamestown+ from Final Form Games is, at its core, an arcade style co-op shooter. Set in a strange alternate history, on a 17th century British colonial Mars (where else?), it’s your job to get in your little ship and shoot various aliens and threats until you’re blue in the face.

Jamestown was originally released on PC back in 2011. It was a success then, but Final Form always wanted to bring it to console. Four years later, here we are with Jamestown+. The “+” represents the additions to the game: new levels, new ship customisations, new user interface and a remastered soundtrack. Not having played the original, I can’t really draw much of a comparison, but what I can tell you is just how great Jamestown+ is.

The art style – and to some extent, the play style – of Jamestown+ is definitely a bit of a throwback to gaming of the 90s. The pixelated retro graphics don’t detract from the game though; if anything, they add to the experience of the game. The style is nothing if not charming. There’s some very detailed locations, and the enemy design is varied and interesting. This isn’t the type of shooter where you’re going to be gunning down hordes of the same enemy again and again – there’s plenty of variety to sink your bullets into!

The gameplay of Jamestown+ is based on a map with five stages (with an additional map in the “moon” that includes the two new levels for the PS4 version). That means there’s seven levels altogether. It doesn’t sound much, but it equates to a lot of play time. The first three levels can be completed on any difficulty, but after that, you’re prompted to complete harder difficulties before subsequent levels will unlock. The longevity of the game is also extended by a plethora of challenges to complete and a Gauntlet mode too, in which you have to play the games stages back to back. You earn coins every time you play, and these coins can be used to purchase new game modes or upgrades for your ship. Put simply, there’s always a reason to have “just one more go”.

There’s a variety of ships and weapons to choose from. The more you play the game, the more you unlock, and the more customisable your ship becomes. Want straight-firing guns? Sure. How about a spread shot, or backwards-firing, or maybe to the side? You can choose whatever style works best for you. Along with a normal attack, you also have a “strong” attack, which again differs depending on what ship you use. As you shoot more enemies and collect coins, your “vaunt” meter fills up. Once it’s full, you can engage vaunt, which gives you a protective shield for a short time and a 2x score boost. Your vaunt will stay active as long as you keep shooting and keep collecting coins.

Jamestown+ functions perfectly well as a single player shooter, but the fun really gears up a notch in couch co-op. The game allows for up to four players on one screen – which would be total bullet carnage. We’ve tried it out in two-player co-op, and whilst it’s mad – and quite difficult to follow your ship at times with everything happening on-screen – it’s good fun, and perhaps more rewarding than in single player. It really does encourage you to work as a team – if one player gets hit, they’re out of the game for a set number of seconds before respawning. If all players get hit in that time period, you lose a life. So if your teammate is hit, the pressure is on to dodge those bullets and stay alive.

The main gripe with the game is the difficulty. Not that it’s too hard (and don’t get me wrong, it is bloody difficult at times), but to proceed to level 4 you need to return to levels 1, 2 and 3 and complete them on “difficult”. And then to unlock level 5 you need to complete each of the previous four levels on “legendary” mode. It would have been nice to be able to play through all the levels on the lowest difficulty and work upwards – or at least have a warning beforehand so you can start out at a higher difficulty if you wanted. Still, I can see why Jamestown+ does this. It encourages you to not only have multiple playthroughs of the same level, but really hone your skills – and if you’re going to have a chance of beating the game on the highest difficulties, you really need that skill.

Despite not being able to play through all the levels on “normal” mode, it didn’t detract from any of the enjoyment of Jamestown+. It may not have snazzy next-gen graphics, and there may not be many levels, but the high replayability factor of this game is perhaps in its simplicity. With its responsive controls and addictive arcade gameplay, the game is good at making you want to play again and again, encouraging you to unlock the next upgrade or beat your last score. If you’re a fan of shoot-em-ups, or if you’re a fan of couch co-op – or just a downright fun game – give Jamestown+ a go. You won’t be disappointed.

Jamestown+ is available digitally on PlayStation 4.