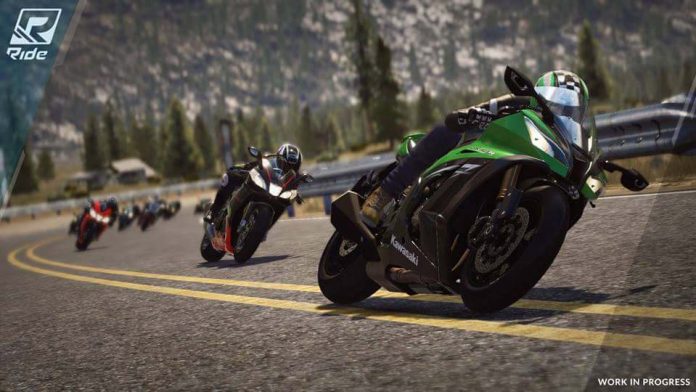 After finding success with their recent MotoGP and MXGP games, developer Milestone returns with a new IP, Ride.

Featuring over 100 licensed motorcycles to race upon a vast collection of real world tracks, Ride aims to be the seminal title for motorcycle fans, enabling you to race at breakneck speeds on two wheels without the risk of suffering a nasty road rash.

Upon starting the game you’ll be prompted to create your rider. Whilst there are a rather large amount of clothing and customisation options, the faces are a bit “unfortunate” looking, but as this has no real impact on the game it’s not really an issue as far as I am concerned. After creating and naming your monstrous avatar, you’ll find that the main content of the game is delivered via a World Tour mode in which after purchasing your first bike, you can choose to compete in a wide range of events to increase your wealth and your position on the world leaderboards. Events are gated by restrictions on motorcycle power and type, so you’ll need to collect a vast array of motorcycles to be able to compete in them all.

I was pleased to see a variety of event types on offer in addition to straight up circuit races, such as drag racing, head to head challenges, time trials, overtake challenges and endurance races. Completion of events awards you cash and reputation points depending on your finishing position, and these enable you to further your progression in the game. Cash can be used to buy and customise motorcycles – and it’s a nice surprise to find lots of visual and performance upgrades on offer. Reputation points increase your standing on the world leaderboards, allowing you entry to elite events as you reach certain milestones which award free motorcycle’s upon their completion. If you ever don’t feel up to tackling the World Tour mode, you’ll be happy to know that Ride also features a Quick Mode in which you can set up an exhibition race or time trial, tailored to your personal preferences. You can even race in local split screen multiplayer – a rarity these days. Alternatively, if you fancy racing against more than one human opponent, the game’s online mode allows you to complete in single races or championships with up to 11 other human competitors. The usual array of matchmaking options are on offer such as quick race, searching for custom lobbies, or creating your own lobby. Whilst I have only completed a handful of races online, the experience was enjoyable with the matchmaking working well and the races free of any discernible lag.

Aside from the scary-faced rider models as mentioned earlier, I found myself relatively impressed by Ride’s graphics for a cross generational title. Visually the game is clean, with nice textures and excellent presentation. The motorcycles truly are the stars of the show though; beautifully modelled, they are filled with intricate details and are a pleasure to look at whilst riding around the game’s scenic tracks. Unfortunately your ears won’t be as happy as your eyes though – the game’s soundtrack is dire, with grating music played throughout races. Whilst the music can be turned off so you can focus on the (probably) realistic and slightly hypnotic motorcycle engine sounds, it would have been nice to perhaps include some licensed tracks to listen to as you race. I also have to point out that the game has exceptionally long load times. You can be waiting up to 30 seconds for a race to load which is not ideal for a game of this nature.

Vital to any racing game, the controls are responsive, and you always feel like you are aware of the forces that are affecting your motorcycle. Ride is also great at conveying a sense of speed, especially when the first person or helmet cameras are used. Although it may initially be hard to get used to controlling the motorcycles – you really can’t race them like you would a car – Ride is suitable for newcomers and seasoned pros alike due to the large number of options available to adjust the difficulty to your level. You can change the AI level of your opponents, number of rewinds available during events, and the sophistication of the physics. A number of assists are also available such as automatic brakes, anti-wheelie control, joint brakes, and a customisable racing line indicator. Finally, you can adjust your motorcycle’s traction control level as you race.

Ride is a fantastic new IP for Milestone that taps into quite a niche market. The poor soundtrack and long load times are the only things that sour the experience, but this is still an exceptional foray into the joy of motorcycling. Its lengthy World Tour mode will have you captivated for hours as you strive to build an extensive collection of motorcycles and become the world’s number 1. For me, this is the closest to Gran Turismo a motorcycling game has ever been, and that is certainly an achievement.