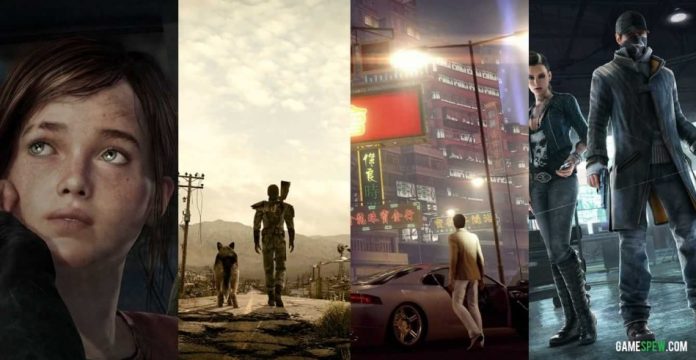 Update: E3 is happening right now! Make sure you check all the latest news by visiting our dedicated E3 pages!

E3 is the highlight of everyone’s annual gaming calendar. It’s the one big event where we know all the good stuff is going to get announced. And with E3 2015 being just three short months away, we can’t help but speculate (and unrealistically daydream) about what we think will get announced. Here’s our E3 2015 predictions (and pipe dreams) for your perusing pleasure…

Ubisoft have already made it clear that a Watch_Dogs 2 is happening. We just don’t know when, where, what or how. Or anything really. Come E3, it’ll have been over a year since we first bombarded the streets of Chicago as Aidan Pierce – so we are really anticipating some kind of announcement from Ubisoft on this one. But who will be the protagonist? Aidan was met with general disdain (we personally don’t know why – Aidan was kick-ass!), so will Ubisoft use their tried and tested Creed method of a different lead for every major release? A new character in a different city wouldn’t be surprising, but either way, we’re eagerly anticipating some more news. A while ago, United Front Games made an announcement that alluded to a Sleeping Dogs 2. The hype train set off with full steam ahead! Then it transpired that the “sequel” was something completely different: an MMO for PC called Triad Wars. Now, we haven’t really heard much about this since, but looking at the official website, it seems to be in full swing. We still think there might be some announcement from United Front relating to this in some way. Either Triad Wars will be released on console, or a Sleeping Dogs 2 is going to happen – but if the release of Sleeping Dogs: Definitive Edition was used as some kind of indication of public interest, we might well be disappointed as the game seemingly didn’t fare very well. We can hope though – the world needs more Wei Shen. We can dream, right? Unfortunately, there’s never been any indication that a port of South Park: Stick of Truth would come to PS4 and Xbox One. Why, Ubisoft, why?! The game sold incredibly well, and as there’s a PC version in existence, a release on the new generation of consoles isn’t exactly an impossibility. Better yet – a sequel would just about make our lives complete. Still, it’s not the most realistic of our E3 2014 predictions, but we live in hope. It’s been almost five years since Fallout: New Vegas was released, and seven since Bethesda released Fallout 3. Seven years! That’s a long time with no Fallout. Interestingly, Bethesda has recently announced that this year will be their first ever E3 conference. That, and the fact that keen eyes have noticed the banner on the Fallout official website has changed for the first time since New Vegas, has all signs pointing towards a Fallout 4 announcement. Sony released Gran Turismo 6 in 2013 for PlayStation 3 – literally two weeks after the release of PlayStation 4. It was a strange move, and we still don’t really understand it. We assumed that surely a next-gen port would happen at some point, but they long since squashed those rumours. In an interview with GamesTM last year, GT creator Kazunori Yamauchi said we’d see Gran Turismo 7 in “2015 or 2016”. Well, 2015 is right now, so our E3 2015 predictions are 100% expecting to see a trailer or get some news from Polyphony on GT7.