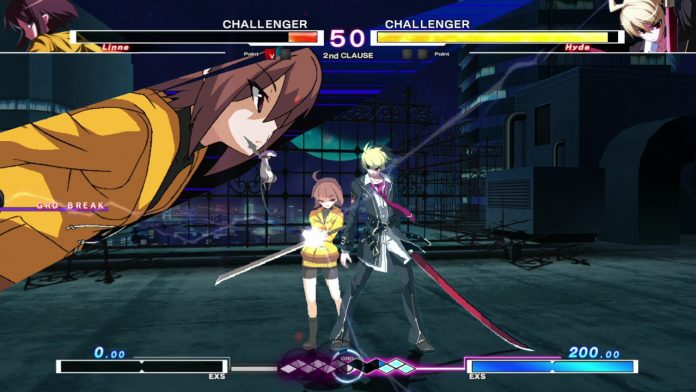 Under Night In-Birth EXE: Late is the newest fighting game by French-Bread, known for their work on the Melty Blood series.

Originally released in September 2012 as Under Night In-Birth in Japanese arcades, the game was heavily criticised for its unbalanced roster of fighters and near endless combos. Luckily the game has since been supported with regular updates and patches, resulting in this new revision earning itself a new moniker.

Question is: with so many fighting games available on the PlayStation 3 can this title stand toe-to-toe with the heavy hitters, or is it just turtling in a corner?

There’s no getting around the fact that Under Night In-Birth acutely follows the generic 2D brawler template. With its cast of eccentric anime characters and the usual slew of game modes such as story, arcade, time attack and score attack, there’s not much to make it stand out next to its better known peers. In some ways the game could even appear lacking compared to others in the genre, with the omission of the now fairly standard trial mode and the lack of any in-depth training options. Despite this, it pulls through smelling of roses thanks to the fact that it’s just a joy to play. Under Night In-Birth’s fast paced battle system is simple, yet offers considerable depth for advanced players. As well as the usual weak, medium and strong attack buttons, the game offers an “EXS” button which provides the player with a dashing assault attack as well as multiple defensive options utilising the EXS bar at the bottom of the screen. Landing successful attacks and taking damage both fill the EXS bar up to a maximum of 200, and the player must decide how to use this effectively to turn the tide of battle.

Advanced manoeuvres such as Guard Thrust, an invincible counter attack upon blocking, and Infinite Worth, a highly damaging super-attack, generally require a set amount of the EXS bar to be used, but by initiating your character’s “Veil Off” mode, this condition can be relaxed. Requiring at least 100EXS, Veil Off mode is activated by pressing the weak, medium and strong attack buttons together and grants the player a whole host of benefits such as 20% increased damage output and the free use of moves that require EXS. This mode does not last long, however, as your EXS steadily depletes in this state and once it has been fully expended, your abilities return to normal. 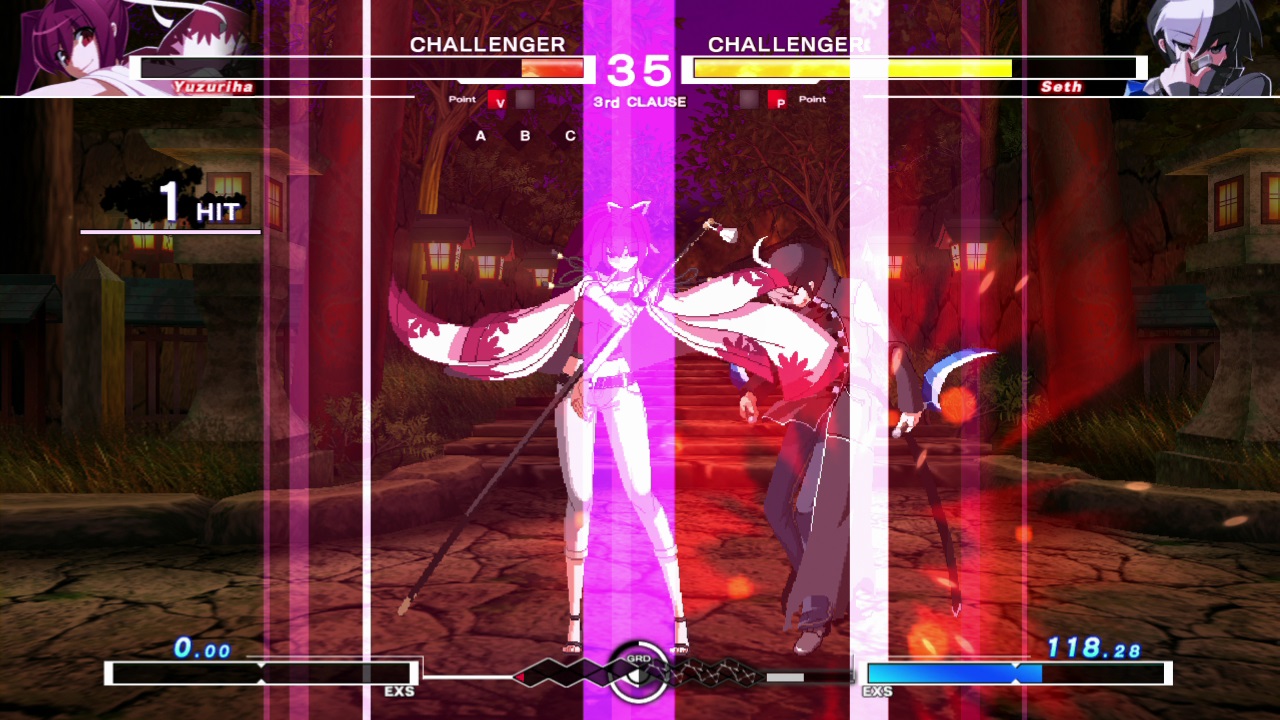 Where Under Night In-Birth EXE: Late really sets itself apart from its hefty competition is its introduction of the “Grind Grid” system. Located at the centre bottom of the screen, the Grind Grid is a gauge of 12 GRD blocks that provides a visual representation of the momentum of battle. GRD can be obtained by advancing towards your opponent and creating positive actions such as successfully attacking and blocking, so it stands to reason that negative actions such as running backwards and taking damage decreases the GRD gauge. Holding down the EXS button can also be used to make your character concentrate which increases your GRD whilst decreasing your opponents – but leaves you stationary and vulnerable to attack. Every 17 seconds, the player with the highest GRD gains what is called a “Vorpal State”, temporarily granting them a 10% damage boost and the ability to use “Chain Shift”, which is performed by double tapping the EXS button. Freezing time for a brief moment upon use, Chain Shift converts GRD to EXS and can also be used to cancel moves, but the amount of EXS gained will decrease. Overall, the Grind Grid system adds a superb strategic element to every battle, as players compete for the benefits that the Vorpal State awards.

Mixing colourful, high resolution 2D characters and 3D backgrounds, Under Night is a mixed bag visually. Smooth, intricate animation brings the characters and their moves to life, but the 3D backdrops on which they fight are often drab and lifeless. Presentation is also lacking, with very basic looking menus. Luckily its rocking soundtrack will distract your attention from both of these as you play. It should also be noted that all dialogue is in Japanese with English subtitles.

Unfortunately, as a niche title with limited gameplay modes and lacklustre presentation, I can’t help but feel that Under Night In-Birth EXE: Late has very slim chance to attract any mass market appeal. However, it is very easy to recommend this game to PlayStation 3 owning fighting game fans. Whilst its solid fighting system is fun for beginners and experts alike, its innovative Grind Grid system is what truly makes it stand out with battles becoming an intelligent tug of war as players vie for the upper hand.

Under Night In-Birth EXE: Late is available on PlayStation 3.