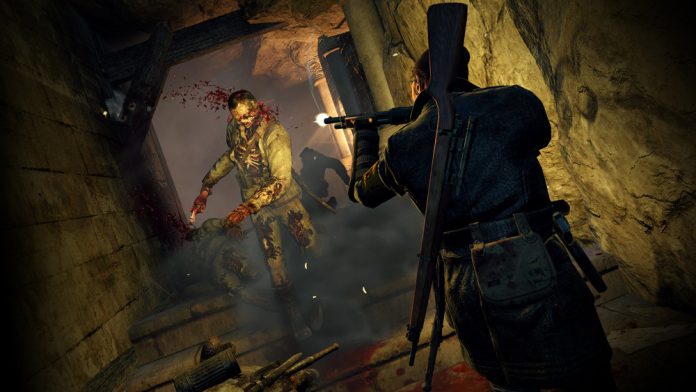 You’d think that with the amount of screentime the living dead receive these days, people would be sick and tired of games featuring them, but with their latest release Zombie Army Trilogy, Rebellion is hoping that maybe the undead still have some steady legs to stand on….

Zombie Army Trilogy’s campaign mode consists of 15 levels, predictably split across three chapters. With each level taking around 30 to 60 minutes to complete, it’s a decent sized campaign that doesn’t overstay its welcome.

Each level generally offers a new environment for a squad of up to four hardened soldiers to battle across in order to progress to the next area. Each mission constantly gives you orders such as “stand your ground”, “get to the next safe house” or “clear the area” – but what it really means is “kill everything in sight”. As fun as killing and disembodying waves upon waves of zombies is, the repetitive nature of these objectives in levels can get pretty monotonous. The only exception to this rule is when you reach the third chapter of the game in which you will find human survivors that preferably should not be killed. These NPCs will fight alongside you in the war against zombies… but should you “accidentally” shoot one of them, they turn pretty nasty pretty quickly. This concept seems alien online, as players, presumably filled with the bloodlust nurtured throughout the previous 10 levels, often slaughter them without thought leading to an all-out firefight.

This issue perhaps highlights a minor problem with the consistency with the game. As a compilation of two previously PC-only Zombie Army titles plus a third new instalment, I suppose it shouldn’t be too surprising that the pacing is sometimes a little off and the difficulty sometimes sporadic. You’ll be happy beginning each new chapter as the enemy waves will relatively be a walk in the park compared to the closing levels of the previous chapter, although chapter 3 proves to be challenging from the get go. Whilst this is not much of an issue as it is nice for these brief moments of effortlessness, a more consistent and gradual difficulty curve would have been welcome.

Inconsistency is also apparent with the game’s graphics. On the whole, the game is largely pleasing to look at (as much as a game with environments covered in gore, demonic worship and Nazi symbols can be, anyway) but it leaves a lot to be desired for a ‘next-gen’ title. There’s some nice lighting effects throughout, and character models (of which there are four men and four women) are detailed, but the environments are pretty basic and contain some shoddy textures here and there. Chapter 3 however, looks distinctly better than the other two chapters, with more detailed and intricate environments. The game also features the “Bullet Camera” system ripped directly out of the Sniper Elite series, rewarding impressive sniper shots with graphically pleasing slo-mo x-ray scenes.

What really shines, though, is the game’s soundtrack. Sounding like a retro horror movie, the music sets the tone perfectly, creating moments of tension in the quieter areas before becoming more upbeat and frantic as you furiously battle the zombie horde. The sound effects build on this, with nice touches such as subtle cues for upcoming enemy waves (the suicide bombers’ ethereal screech is a godsend) and whispers released from the Dualshock 4’s speaker to put you on edge.

In addition to the campaign, a horde mode is also included for you and up to three other friends to defeat waves of increasingly tougher enemies. Five maps are available, each with their own enemy wave patterns and complexity. The maps are quite varied and are all multi-layered apart from one called “Dead End”, which is nothing more than a long corridor. Whilst more maps would have been nice, the inclusion of online leaderboards is sufficient for prolonging the mode’s longevity. Every kill awards points, with special kills such as headshots rewarding a premium amount. The trick is to kill enemies successfully without missing any of your shots, as each kill increases your combo multiplier. Miss your target however, and your combo is lost, starting you from scratch again. This is a great arcade style score system that rewards skill whilst also creating competition between players across both the horde and campaign modes.

Although both of the Zombie Army Trilogy game modes are playable solo, they are obviously designed with co-op in mind. In this regard, it’s frustrating that the game’s matchmaking options are sorely lacking. Players can choose to create a private match or join a quick match and that’s about it. Only by creating a private match can you select your game’s difficulty, but this then prevents people entering your game unless invited. We resorted to using the quick match option repeatedly to eventually get in a game with the difficulty and enemy density that we preferred but this was not ideal.

And yes, you read that right: difficulty and enemy density are graciously separate entities, meaning that you can fine tune the difficulty to the level you feel comfortable with quite successfully. It’s just a shame that you can’t filter a search for online matches based on them.

Disappointingly, during the 15 or so hours we spent playing the title we encountered a handful of bugs. Trophies not popping for completing levels online was the most frequent and annoying, as well as having to restart checkpoints due to sealed areas remaining closed even after the eradication of all enemies. Matchmaking proved to be troublesome too, preventing us from joining our friends’ games for no apparent reason on numerous occasions. At one point, we also had an unfortunate lobby in which all members of the party would begin stuck waist deep in the floor. Whilst none of these bugs were game breaking, they did detract from our enjoyment of the game somewhat and will hopefully be fixed via a patch sooner rather than later.

Zombie Army Trilogy is a tremendously enjoyable game that is at its best when played with a solid group. The game’s lengthy campaign provides some solid zombie sniping action, but unless you are into chasing leaderboard scores, the lack of a longer term hook is apparent upon its completion. Whilst its bugs and lack of matchmaking options can annoy, this a still a game that we can quite easily recommended to those looking for some mindless fun.

Zombie Army Trilogy is available now on PS4 and Xbox One. We reviewed the PS4 version of the game.