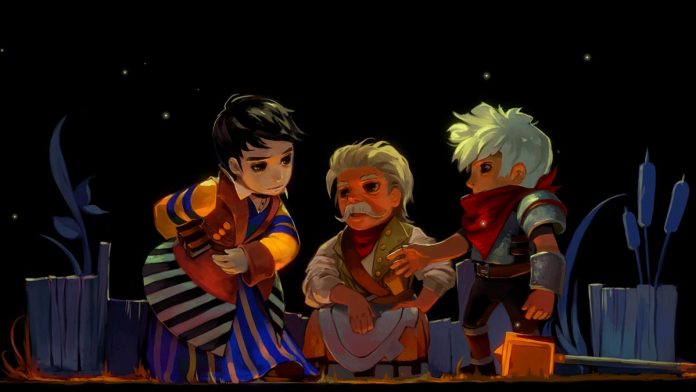 Bastion was first released to critical acclaim on Xbox 360 in 2011 by SuperGiant Games.

It was soon after released on Windows and Mac OS, but PlayStation fans had never been privy to the struggles of The Kid and his mission to rebuild the Bastion – until now. Bastion PS4 is finally released this week and for anyone who hasn’t yet played it, it should be an essential title.

In Bastion, your character has no name – you are simply “The Kid”. Waking up in a floating post-apocalyptic world, you find your way to the Bastion – a town designed to be a safe haven in case of “the Calamity”. Well, the Calamity has happened, and unfortunately there’s not much left of Bastion, so it falls on your shoulders to travel from wrecked city to city to collect “cores” and “shards” – each of which will rebuild a part of the Bastion, until it’s restored to its former glory. There aren’t many survivors of the Calamity, besides beasts and monsters – so you’ll be constantly battling fiends and foes in order to retrieve those cores and shards.

Bastion is played in isometric top-down 2D, and has a very unique cartoon style. It doesn’t look dated or retro – the bright colours and fantastic animations keep it up to date in a world satiated with Pixar-quality 3D graphics. The simplicity of its design adds to the feel of the game, if anything; each location that The Kid travels to is a series of floating platforms that only appear as you step forwards towards them and this effect is complemented perfectly by the isometric style.

At its crux, Bastion is essentially a simple RPG. You level up, upgrade your weapons and upgrade yourself with the use of “tonics”. A choice of 11 weapons is at hand – you’ll accumulate them at various stages throughout playing the game – but you can only ever have two equipped at any one time. You can only change your weapons in the Bastion (once you’ve restored the arsenal, that is), and occasionally you will stumble across an arsenal out in the world where you will be able to access your stash of weapons. Collecting currency (by defeating enemies and finding it randomly on each map) enables you to buy items to upgrade your weapons, increasing your combat abilities. There’s also various collectibles to be found throughout each level, but finding these isn’t pertinent to game completion. Combat is very simple – each of the two weapons you have equipped will be mapped to square and circle, with a “secret skill” (a power attack, essentially) mapped to R2. Usually, you’ll have both a long-range and a short-range attack available, so although you’ll only be pushing three buttons to utilise everything at hand, you have enough options to be fully-equipped for any situation. Each enemy type has a distinct attack and some are more susceptible to particular attack types, but you’ll soon learn this through trial and error.

One playthrough of the game doesn’t take particularly long – you’ll probably complete Bastion for the first time in around four to six hours. It doesn’t sound much, but there’s plenty of replayability on offer. There’s a “New Game Plus” mode that unlocks once you’ve finished, as well as a “Score Attack” mode. In both modes you’ll start with all upgrades available to you instantly, as well as carrying over your XP level. The Score Attack mode introduces an arcade-style score that increases as you kill enemies. Alongside the main story, there are also “proving grounds” to complete. There’s a proving ground for each weapon you collect, and each one tests your skill with that particular weapon. Some of these are very difficult until you’ve fully upgraded your weapons. There are also four battle areas that will unlock as you play through, where you’re challenged to survive waves of enemies. The addition of each of these different modes and challenges extends the gameplay, and although New Game Plus doesn’t necessarily make the game any different, it was so enjoyable the first time round that I was eager to jump straight back in anyway.

Difficulty of Bastion remains constant throughout. There are no difficulty settings at the outset (besides “No-Sweat Mode”, which lets you start the game allowing for unlimited deaths for less experienced gamers), but the “Idol” system makes up for this. One of the buildings you’ll restore in the Bastion is the Shrine, where you’ll unlock various idols of the Gods. Each of these idols increases the difficulty of your game in some way – i.e. one gives enemies more health, one stops enemies spawning health potions, one makes them faster to attack. You get the point. In New Game Plus, each of these idols are unlocked from the very start, so if you want a really torturous challenge, you can turn them all on.

The one thing that really shines above anything else in Bastion is the audio. The soundtrack itself – produced by Darren Korb – is excellent. It’s perhaps not to everyone’s taste, but it stands out as being an innovative choice for a game soundtrack. The most unusual thing about Bastion is, above the soundtrack, is a narration. Your character doesn’t speak; instead, a survivor known only as “The Stranger” narrates the game and your actions. Voiced by Logan Cunningham, The Stranger’s narration has almost a feel of Morgan Freeman: the kind of velvety story-telling voice you can forever listen to without ever getting irritating. The narration is dynamic too, as it follows your actions. If you accidentally roll off the edge of the map, or go down a dead-end, it’ll be referenced in the voiceover.

There isn’t anything specific to say about the Bastion PS4 version. If you’re hoping for a drastically-improved remaster for the new generation of consoles, you won’t find it here – simply because there’s nothing to improve. The game is silky smooth, looks amazing and is a treasure to play. Although it’s almost four years since its initial Xbox 360 release, the fantastic and timeless art style means it hasn’t aged in that time and is just as relevant now as it ever has been.

I really cannot praise Bastion highly enough. There’s something about the dreamlike graphics and acoustic beats of the excellent music that keeps you entranced in this game. Though simple, the combat is gratifying, and a simple weapon/character upgrade system means that even the most inexperienced of RPG players can jump right in and enjoy this game to the full. Whether or not you’ve played Bastion in the past, you should definitely revisit it on PlayStation 4. It has a charm unlike any other game.

Bastion is available digitally on PlayStation 4, PC and Xbox 360. Our review is based on the PS4 version of the game.