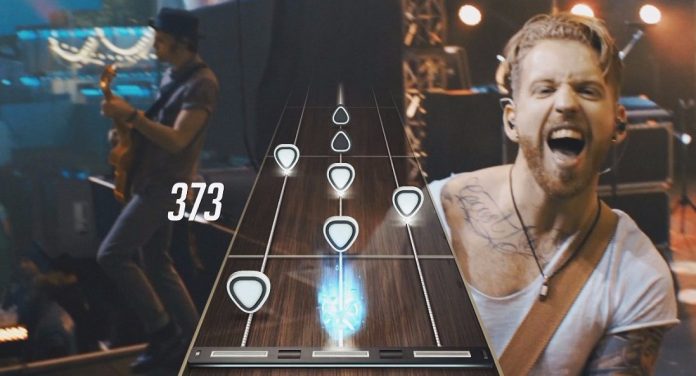 It’s been almost 10 years since the first Guitar Hero, on PlayStation 2, was released. For several years the game dominated the music gaming market, having sold more than 25 million units worldwide. However, for the last five years, Guitar Hero has been all but dead, with games largely outdated and ill-supported. That is, until now. This week, Activision have revealed full details about the brand new Guitar Hero Live, which is coming to PS4, Xbox One, PS3, Xbox 360 and WiiU later this year.

The game has been totally redesigned from the ground up and promises to offer a completely new experience from the previous Guitar Hero iterations we’ve all come to know and love. To start with, the controller is brand new. No longer does it adorn the signature five coloured buttons, but instead has a simple black and white grid of six buttons, laid out in two rows. The new guitar design is sleek and looks much more like a real guitar than the previous controller. Activision promises that the new button layout makes it easier for anyone to pick up and play, but also offers a greater challenge to more seasoned players.

The game itself has taken on a new visage too. Rather than the colourful cartoon avatars of you and your band mates from last generation’s Guitar Hero, you’ll now find yourself in first person mode, chucked in front of a “live” audience with real life band mates at either side of you. No more CGI; everything here is filmed footage from real gigs (or so we’re told). Actually, the overhaul to the appearance looks nice – the menus and gameplay itself look a lot cleaner, more modern and just have a more “grown up” feel to them. Guitar Hero isn’t a little kid anymore – it’s sophisticated and mature. These real life crowds respond to how well you play, too. Expect manic cheering and happiness when you’re on a roll, but when you start missing those notes, expect cries of outrage, picket signs saying “you suck”, heckles off the stage and even drinks launched at you. Your band mates can even let you know if you’re rocking the show or ruining it for the rest of them. That can’t be too good for your ego, but let’s hope it doesn’t put you off trying again.

It looks like how you select what songs to play has been totally overhauled, too. From what information has been released so far on the official website, there are two modes of play: the main Guitar Hero Live campaign, where you have the usual library of songs to play through, working your way up from playing in small bars and clubs to headlining the biggest outdoor arenas. There’s also something completely new, called “GHTV”, which sounds like a network of music channels that are constantly playing a variety of music videos – we’re told there’ll be hundreds available at launch – that you can dip in and out of, and play along with any song you like.

As for the artists that have been announced so far for Guitar Hero Live, the line up is looking pretty solid, and very much the variety we’d expect from Guitar Hero. So far 13 artists have been confirmed, and more will be announced on in the lead up to launch. Green Day, The Killers, Fall Out Boy, My Chemical Romance, Ed Sheeran, Skrillex and The Lumineers are amongst those already confirmed on the playlist.

Everything we’ve read about Guitar Hero Live so far has got us excited. The announcement of a new iteration of the ever-popular series has been long awaited… but the question remains: can the game live up to expectations?

We have no doubt in saying that the game is going to be an initial success. With five years having passed since the last game, Warriors of Rock, was released, fans are undoubtedly excited to dive back into the action. The heightened realism that new developers FreeStyleGames are trying to bring to the brand will be a big change –but just how well it’ll work in reality remains to be seen.

For guitar enthusiasts looking for a truly realistic gaming experience, there’s Ubisoft’s Rocksmith, which lets you plug a real electric guitar into your console. The joy of Guitar Hero was its simplicity; the coloured buttons meant that anyone could play, even if they’ve never touched a real guitar before – and Guitar Hero works best in a social situation, with a group of friends just wanting to have fun. That’s where Rocksmith was held back – whilst an amazing simulation tool and a powerful tutor for those looking to learn guitar, its complexity meant it’s not the kind of game you can stick on to rock out with when your friends are over for the evening. The new controller of Guitar Hero Live seems to blur the lines a little – with a much more realistic-looking input device, is it still going to be as accessible for beginners as the original Guitar Hero? The developers promise us it will be – but we just can’t know for sure until we get our hands on it.

Regardless, we’re certainly excited to give Guitar Hero Live a run for its money. It’s been a long time coming, and the new generation consoles are severely lacking a good party music game. Let’s just hope it lives up to the glory of its predecessors.

Guitar Hero Live will be released later this year on PlayStation 4, PlayStation 3, Xbox One, Xbox 360 and WiiU. No definite release date is given just yet, but it’s expected Autumn 2015. Pre-order now from Amazon!