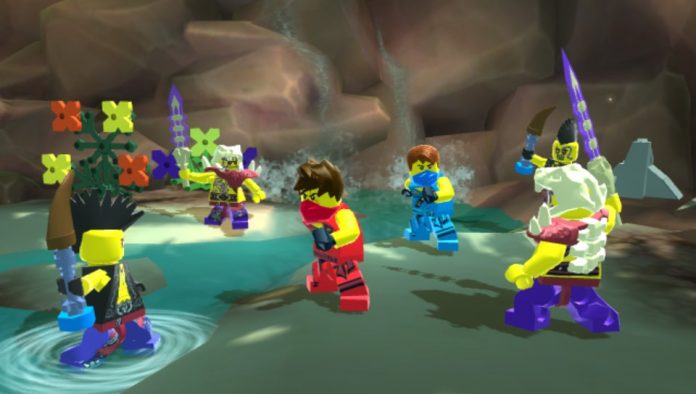 Ah, Lego games. You either love them or you, well… kind of like them.

Surely nobody can possibly hate the Lego game format – one that has remained largely unchanged since the first major release almost 10 years ago with Lego Star Wars. The newest offering from Traveller’s Tales’ Lego franchise is Lego Ninjago: Shadow of Ronin, based on the popular Lego Ninjago kids TV series.

Now, I’ve never played nor watched Lego Ninjago, so Shadow of Ronin is my first foray into the series. Did it matter? Not an ounce. Having played a Lego game before, I instantly knew the controls and exactly what I needed to do. The story isn’t given much introduction and you’re thrown right into the action with a bunch of characters that the game expects you to already be familiar with. There are quite a lot of FMVs in the game, and I didn’t care much for them since I wasn’t familiar with the series. In Lego games I like to get straight on with the smashing and building action, so the frequent disturbances in the form of these videos (that you can’t skip) was slightly annoying, but the target audience (i.e. a young Lego Ninjago fan) will surely find some enjoyment in these. The characters are voiced well, and despite the dialogue being ridiculously cheesy, I couldn’t help but find myself giggling once or twice at some silly one-liner.

It was disappointing to find that the videos, whilst very nicely animated, were not at the same resolution as the rest of the game, leaving them looking unsharpened and dated – something we’ve noticed before in Lego games.

If you like a pure Lego game experience, you can’t go far wrong with Lego Ninjago: Shadow of Ronin. The gameplay is simple and solid, but there’s nothing you won’t have seen before in another Lego title. The game is divided into 10 chapters, each of which is broken down further into three separate levels. The levels are short, varied and fun. There’s a good mix of the traditional platforming levels, vehicle levels (including aircraft, boats and road vehicles) and boss levels. Between each and every level is a cut scene, which is a bit overkill considering some of the levels can be completed in about five minutes.

The brevity of each of the levels means that the game is easy to pick up and put down, which is a valuable asset to a handheld title. You can pause at any time and the game autosaves after completing each level segment, so there’s no fear of losing any progress. You’ll find the format of the levels very familiar: there’s five gold blocks to gain in each, which are unlocked by completing various tasks, as well as character pieces to find, and red blocks which unlock special upgrades. As with all Lego titles, you can’t get all of the collectibles until you’ve played through the game in story mode and unlocked free play.

One thing I did like about Shadow of Ronin is that you’re not forced to use the Vita’s touchscreen controls for any of the action in the levels. Other recent Lego game offerings on the Vita have mapped certain actions exclusively to the touch screen, which can be really offputting. Lego Ninjago: Shadow of Ronin gives you the option to use either the buttons or the touchscreen, which is a very welcome choice.

The positive aspects of the game are also unfortunately where it falls down. The game is very formulaic and prescriptive. It offers nothing that we haven’t seen before and plays no different to any other Lego game. It means that you can jump straight into the action and everything feels familiar, but it can also be a bit tedious. Different characters have different skills – and the skills used in this are more or less identical to the skills we’ve seen in Lego Marvel games. You get exactly what you expect from a Lego title, and in a way that’s nice, but at the same time a brand new title should have something new to offer.

If you’re a Lego game fan, then this one will definitely quench your thirst for some new block-bashing adventures. It’s a solid entry into the franchise, and offers all the fun you’d expect from Lego. However, its lack of anything new or fresh is a little disappointing. Regardless, Lego Ninjago: Shadow of Ronin is still good fun for adults and kids alike, so if you’re looking for a mindless but entertaining platform game that doesn’t offer much of a challenge then you’ll be satisfied with this.

Lego Ninjago: Shadows of Ronin is available on PS Vita and 3DS. We reviewed the PS Vita version of the game.