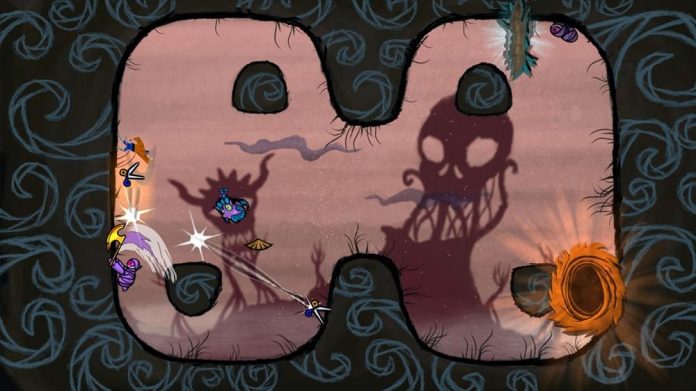 Paperbound by indie developer Dissident Logic is perhaps one of the simplest games you’ll ever load up on your PlayStation 4, but don’t let that put you off. In a tiny (paper) package, a great amount of fun and frenzy is to be had.

Essentially a multiplayer brawler, Paperbound works best when you’ve got a couple of friends over. With a cast of characters to choose from, you find yourself on a fixed-screen setting armed with a pencil for stabbing, a pair of scissors for throwing and a pot of ink for launching and exploding. The task at hand? To kill your friends as many times as possible (and avoid getting killed in return). On loading the game, Paperbound offers you a selection of game modes to choose from. The first is “Classic Versus” – which, as the name suggests, is a classic versus battle where you simply take down your opponents. Then there’s “Capture the Quill”, which is a take on the classic capture the flag mode – you’ll play in two teams of two, and the aim is to steal the opponent’s quill out of their ink well and take it back to your own. There’s also “Last Man Standing”, which is similar to the classic versus battle, but rather than counting up how many kills you’ve accumulated, it counts down the amount of deaths you’ve suffered – so the person who has avoided the most deaths will be victorious. Lastly is a mode called “Longer Live the King”. Upon killing your opponent, you’ll be granted King status. This will be taken away from you if you die (and your victor will then be the King). Basically, stay as king for as long as you can to win.

In any game mode, there are several customisation options to adjust the game to your liking. You can choose the amount of kills needed for a win; you can add AI players (who are rather ruthless!) to round out the team numbers or to play by yourself, and there’s a plethora of different locations to choose from. The levels are split into five books – each book with its own theme, and each having four or five separate maps to select. What’s handy is the game tells you what map is suited to what number of players – some are more geared towards two players whilst others cater better for four.

There are plenty of characters to choose from, and each can be customised with various colour options. The characters are a delight – from quirky stickmen to hand drawn cartoons of ancient book characters. There’s also a few playable characters thrown in from other indie games – we were happily surprised to see Juan from Drinkbox Studios’ Guacamelee amongst them.

The backdrops for the game are visually pleasing, too. Though simplistic in nature, the selection of settings on offer in Paperbound are all vivid, well thought out and nice to look at. Each “book” has a totally different feel to it – some being simple 2D hand drawn platforms, whilst others have a more intricate backdrop to them; their details and beauty akin to some level designs from the likes of Rayman Legends.

The first time we played Paperbound, I’d never laughed so much at getting constantly brutalised by my competitors. The game is nothing short of whole-hearted fun. Playing with four people is, in a word, total chaos – but it’s hilarious chaos. You might find yourself getting a bit of a headache trying to keep track of your little character on screen as your opponents attempt to scissor and pencil you to death – but that’s all part of the fun.

There’s no structure or story mode to Paperbound, which means that you can just jump straight into the action of whatever game mode you wish. It’s certainly a positive when playing with friends, as there’s no introduction to give nor any kind of need to “learn” the game. Anyone can pick straight up and play. And apart from a brief delay when first booting up, there’s no loading screens to wait upon so from pressing start, you’re straight into the action.

The downside is, the fun isn’t exactly long-lived. You can complete a match in a matter of minutes (or less), and although there are plenty of level designs to get through, even completing all of these on the different game modes won’t take much more than an hour or so. It’s not necessarily a bad thing though – as for a quick party piece with friends, the brevity is ideal. After half a dozen matches or so you or your opponents will quickly lose interest as it can become repetitive.

In short, don’t expect to sit down and play this for the long haul – but we guarantee that you will want to dip in and out regularly. Paperbound is another indie title that’s sure to prove popular with players of any age, and it’s a great example of simplicity sometimes being the best medicine.

Paperbound is available on PS4 and PC. We reviewed the PS4 version of the game.