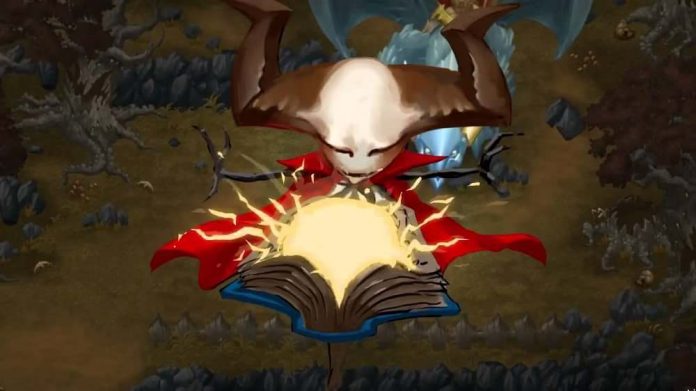 One of my favourite games as a child was The Legend of Zelda: A Link to the Past. Aside from the odd bout of Super Mario All Stars, it was about the only thing I ever wanted to play on my Super Nintendo, and it was the first game I fully completed.

Upon loading up Lifespark Entertainment’s Rack n Ruin, I was immediately transported back to my childhood. The likeness to A Link to the Past is apparent almost immediately and I was flooded with happy memories of playing Zelda for the first time. From the music to the layout of the dungeons, it feels like a spiritual successor to A Link to the Past, and the nostalgic parts of me loved every minute of the trip down memory lane. It’s not the only influence either; I couldn’t help but be reminded of Diablo whilst travelling through the gorgeous hand-painted scenery – though it’s not surprising, considering creator Tyler Hunter is an ex-Blizzard artist.

It’s clear that Rack n Ruin is abundant with classic adventure influences, but this is no cheap rip off. It has carefully taken all of those familiar elements of retro adventure games and RPGs and created something entirely new: the twist being that in this game, you’re playing as the enemy. That’s right. No cheesy quest to save the world here. You play as Rack, a minion of the devil (or Ruin as he’s known here), put on earth with the sole purpose of destroying it. Despite batting for the evil team, you can’t help but root for Rack. His dialogue is witty and packed full of well-written humour – and his evil cackle that follows any milestone in the game made me chuckle every time I heard it. At its core, Rack n Ruin plays out in the same way as any other old-school adventure RPG. The world is split up into very clear “zones” (the tree-laden village, a forest, a desert, an icy region) and it’s your job to traverse through the world, making your way from dungeon to dungeon, defeating each boss whilst you’re there. There’s puzzles along the way too – which for me, although frustrating at times when the solution isn’t initially apparent, are a highlight of the game that deserve to be celebrated. It’s rare in today’s age of instant gratification that a game actually requires you to think, so it was refreshing to see some old-fashioned brainteasers that need to be solved before you can move on.

The game gives you basic direction, but never hand-holds you. A marker appears on your (very vague) map which shows you the general direction of where you need to head, but it’s entirely down to you to figure out how to traverse the sometimes labyrinthine environments. Luckily, the world isn’t big enough for you to get horrendously lost in; you may cross the same paths a few times in trying to find your way to the next dungeon, but it won’t take too long for you to get there. That said, there is still a lot of ground to cover in terms of exploration, with plenty of caves and hidden paths for you to discover. Though fairly compact, the map is big enough to offer plenty of adventure, without ever feeling overwhelming. Rack n Ruin isn’t designed to be a walk in the park. It’s tough, from start to finish. Enemies are thrown at you from every which way, and they constantly respawn in most areas, so you never feel safe. But what do you expect when you’re a minion from hell? The world hates you! The combat system is another way that Lifespark has mixed up the genre somewhat. Whilst one of your weapons is a sword, so you can engage in standard toe-to-toe combat, much like A Link to the Past et al, the sheer volume of enemies means that this isn’t effective, so you’ll find yourself preferring projectile weapons. That’s where the game moves away from being a typical RPG and will feel like an arcade style shoot-em-up; you’ll be weaving around the screen through groups of enemies and dodging their waves of missiles. It’s fun, and keeps you on your toes constantly whilst you’re playing, but sometimes feels a little too much, especially in an area where you’re trying to concentrate on solving a puzzle, yet waves of enemies keep spawning to distract you.

Visually, it’s a great looking game. Considering its nature, it would have been all too easy to go down the retro 8-bit graphics route, but I’m so glad Lifespark took a different direction. Rack n Ruin manages to balance the line between retro and modern very well; it generates all the right warm and fuzzy feelings of nostalgia without ever looking or feeling dated. The hand-drawn art style feels very crisp and clean, and is always pleasant to look at. The music teeters the same line too – perhaps erring more to the side of retro in this case, though that’s no bad thing. The music is uptempo and pumping, almost techno when you get to a boss battle. It’s a treat to the ears, though considering you’re playing as a force of evil, it sometimes feels a little too upbeat. On normal difficulty, the game manages to be challenging without being frustrating – if you can’t solve a puzzle or get killed too quickly, you can accept that you’re going about things in the wrong way, and gladly try it again. The fact that you’re not given too much guidance through the game just makes it all the more challenging when you succeed, although some players could find this a little vexing. Overall, I found little to dislike in my time with Rack and his quest to ruin. It’s a solid game, strengthened further by its nostalgic elements. Any fan of the early Zelda games will surely love Rack n Ruin instantly, and whilst others may take a little long to warm to it, the game offers something for any fan of the old-school RPG adventure format.

Rack n Ruin is available digitally on PS4 and PC. We reviewed the PS4 version of the game.