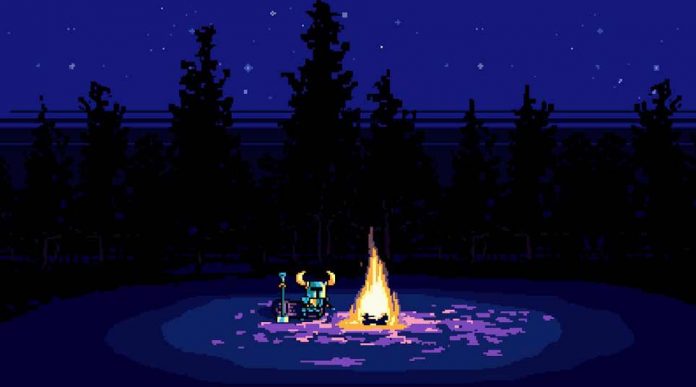 Having grown up with video games since the 80s, it’s amazing to see how far they have come.

Where once I would have been blown away by the audio-visual splendour of Frogger, these days a game has to have realistic cloth physics, a cinematic soundtrack and graphics indistinguishable from real life to simply keep up with the pack. Sometimes though, modern games with all their bells and whistles and open world shenanigans just don’t cut the mustard, and you yearn for something more simple and old fashioned. Luckily for those times, there are games like Shovel Knight.

Central to Shovel Knight’s tale is his partner, Shield Knight. Having adventured together for years, Shovel Knight loses his partner after they embark on a journey to the ominous Temple of Fate. Saddened by the loss of Shield Knight, he secludes himself for many years, but upon hearing about the rise of a dark enchantress that has unsealed the Tower of Fate he once again ventures forth to the Tower in the hope that the can save his beloved. Unfortunately for Shovel Knight, the enchantress has sent forth The Order of No Quarter to halt his advance, and so our hero has his work cut out for him before he has even stepped foot within the tower. From the moment you start up the game it’s obvious Shovel Knight harks back to a bygone era. With its 8-bit visuals and retro soundtrack you are straight away taken to a time when gameplay was king; although that’s not saying that the game doesn’t have its own audio-visual charm. Your attention quickly strays from what the game looks and sounds like anyway, as when you actually start playing it you realise it’s an absolute pleasure.

They say that imitation is the greatest form of flattery and it’s obvious that Yacht Club Games, the developers of Shovel Knight, drew heavy inspiration from a raft of retro titles during its development. The core gameplay of Shovel Knight is very reminiscent of early Castlevania games (albeit sans whip); you explore fairly linear 2D levels defeating enemies, ultimately squaring off against fiendish end of stage bosses. You even replenish your health by inexplicably finding meat hidden in walls and have a range of secondary attacks and abilities – although in Shovel Knight they are obtained by purchasing “relics” throughout your adventure. Married to that is a world map system ripped straight out of Super Mario Bros. 3 and an end of level camp scene that reminds me of Golden Axe, as well as numerous other nods to games of old. What none of those other games had however, was a shovel, and certainly not one that was wielded by a knight as a weapon. Shovel Knight’s shovel is wonderfully versatile. As well as using it to dig through piles of dirt to reveal treasure and thwart enemies with a satisfying whack, it can also be used to return projectiles back at attackers if timed correctly and even bounce on enemies and other environmental objects. This gameplay element is used quite often throughout the game, with bouncing allowing the eponymous Shovel Knight to access secret areas and traverse perilous pits unscathed. The shovel can also be upgraded to enable Shovel Knight to dig quicker as well as shoot a spark along the ground with each swing when at full health. In fact, Shovel Knight’s beloved shovel is what really makes this game unique. Despite aping so many other titles, Shovel Knight manages to feel unique and fresh, which is a highly commendable feat indeed.

Challenging, but not offensively so, Shovel Knight offers a fairly meaty adventure. As you make your way throughout the game’s many levels you will collect a wealth of treasure from your foes, chests and dirt piles that can be used to power up your shovelled hero. From new suits of armour offering numerous benefits to simply increasing your pool of health and magic, each upgrade has a tangible effect of making your adventuring just that bit easier. Keeping the treasure you’ve found isn’t always that easy though, as whenever you die you leave a percentage of the treasure you are currently carrying at your place of death. It’s a system very similar to  that seen in Dark Souls, whereas making back to the place you died enable you to reclaim the gold you lost, but dying again beforehand sees it gone forever. My first playthough saw me complete the game in just shy of seven hours, but there were numerous collectibles left undiscovered and a new game plus mode left untouched which promises further gameplay. Creations like Shovel Knight prove that games don’t have to have fancy graphics or cost lots of money to be engrossing adventures. Quirky, endearing, challenging and wholly entertaining, Shovel Knight offers a slice of old-school platforming action at its best. Fans of the genre should consider this title essential, and anyone else that feels like a break from the myriad of multi-million pound developments being released left, right and centre should seriously consider giving Shovel Knight a try. You never know, you just might love it!