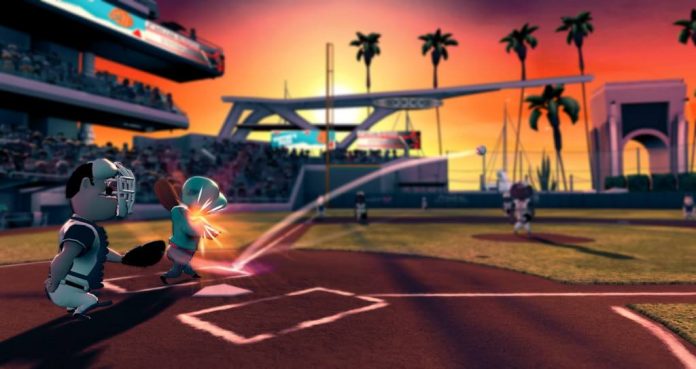 Super Mega Baseball is new indie developer Metalhead’s first entry into the video game market. With its quirky and colourful animation style, it certainly caught our eye, but do its gameplay mechanics score a home run or strike out?

I love what Super Mega Baseball is trying to do. Although an ever-popular genre, sports video games are often very dull and generic, with their realistic graphics not offering much in the way of imagination. Metalhead’s offering attempts to throw that notion on its head by creating a baseball game that is both realistic to play, but also fun to look at. It almost succeeds… but for me, it’s caught out at the first base. I was instantly drawn to the delightful animation style that Super Mega Baseball offers. It instantly looks inviting and appeals to a very wide spectrum from young to old. The 3D graphics aren’t exactly pushing the PlayStation 4 to its limits, but since this is a cross-generation release, it’s to be expected. Regardless of being notably last-gen, the visuals are still a pleasure to behold. Character models are fun and well-animated. Rather than being realistic, they are more like caricatures, with exaggerated features, over the top facial expressions and humorous miens. They’ll sweat excessively when under pressure, or yelp in pain should you accidentally smack them in the face with the ball when pitching. Little touches bring this game to life and make it a joy to play.

Sadly that’s where the enjoyment ended for me. Jumping into the game, it soon became apparent that for what looks like a very family-oriented arcade-style fun game, it actually has some overly complicated mechanics under the skin. Whilst this isn’t necessarily a bad thing, in Super Mega Baseball they’re poorly demonstrated at times and many players will find themselves feeling alienated by the level of skill (and understanding of the game) that’s needed to be able to play.

The controls don’t appear too convoluted at the outset, but you must cycle through each of the three positions in the game (batting, pitching and fielding), and each position has its own control scheme you need to master – with each having its own “advanced” settings to enhance skill too. For instance, when batting, you line up your reticule by pressing “X” at the opportune moment, but if you want to fine-tune your shots you can “power up” a hit by holding down the square button and releasing when the ball is in the right spot for you to hit. Unfortunately, it’s not as simple as it sounds as timing is very unforgiving – and it takes a great deal of practice and precision to line up your reticule in the right space to hit the ball.

The same goes for pitching. You can choose a predefined “throw type” by cycling through a list with your right analog stick, and then you can throw by pressing X, or charge a throw by holding square, after lining up your throw in a set area. This is easier to master than batting, but still takes a great deal of trial and error to feel like you’ve fully cracked it.

Fielding is generally easier, as much of the action is automated. The computer will highlight the fielder who is closest to the ball, and when the ball comes into range, you can use your shoulder buttons to either jump or slide for the ball. You then use the face buttons to throw the ball back to the appropriate base to catch the opposition out. On first playing the game, all of this information is given to you in a barrage of pop-up informational screens. There’s no tutorial mode – just a simple help guide that tells you what buttons to press for each action. It’s an overwhelming amount of information to take in for what you assume will be a simple game, and it would be have been much more efficiently delivered in the form of a quick tutorial mode. There isn’t even a practice mode in the game – somewhere to go to nail down your batting or pitching skills would have been a game-changer. Instead, you’ve no choice but to play through several fully-featured innings whilst being interrupted by the persistent help boxes until you have a handle on the controls.

As for what Super Mega Baseball offers, its menus are rather limited. You can customise a game (choose how many innings, play against the computer or a couch co-op partner for example) or you can take part in a tournament. It offers decent customisation with regards to creating a team though; there’s have a choice of several teams, each with their specialism (i.e. some teams excel in batting, whilst others are better fielders and of course there’s an all-rounder). You can go as far as editing the appearance of each member of your team if you wish, but considering you hardly see your characters whilst playing, it is mostly a waste of time. The innovative “ego” system lets you adjust the difficulty somewhat. Every player has an ego score, rating from 1 to 100 which you can manually adjust. The higher the ego, the harder the game will be for you – think of it as a “handicap” score. It’s handy, especially in co-op, as it allows a highly skilled player to have a more balanced match with someone less familiar with the game.  There’s also several different stadiums and ballparks to choose from as a backdrop – each with a unique and quirky feel to it. For those that manage to master the controls, Super Mega Baseball offers a rewarding experience. The dynamic visuals offer a refreshing change from the somewhat drab realism of other baseball games and the ego system means there’s always the option of adding extra challenge to the game should you get competent. It’s just a shame that the majority of casual gamers – to whom the bright arcade-like visuals will appeal most – will likely struggle to get a handle on the complex control system.  The lack of any true tutorial system has truly done the game a disservice, as someone unfamiliar with a baseball game will unlikely find the impetus to persevere with mastering the art of this game.

Super Mega Baseball is available digitally on PS4 and PS3. We reviewed the PS4 version.