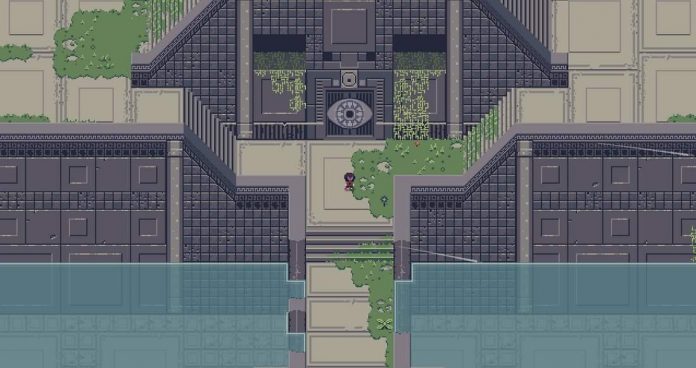 Titan Souls. You see the word Souls in there, and you automatically think of Dark Souls and Demon Souls. And whilst Titan Souls is in no way related to the notorious games by Fromsoftware, they do have a surprising amount in common.

That common ground is death. So many deaths, so much of the time. Death isn’t the aim of the game but it’s certainly a big part of it. in Titan Souls, your one and only task is to take down a series of giant beasts, laid out in a sprawling 2D map. Your only equipment throughout the game is a bow and a single arrow. You can only walk, run or roll. There are no fancy attacks or upgrades to unlock. You remain the same level throughout, with the same equipment and the same moves.

Granted, the bosses remain the same level too. You can tackle them in any order you like. This isn’t some kind of button-mashing brawler. The bosses are all about strategy. Each one is well designed, with a very particular theme and mode of attack. The aim of Titan Souls is to figure out how each boss works, locate its weak point, and figure out how to exploit it. In my first hour of playing Titan Souls, I died 80 times. The game very kindly gives you a death count on your save. Between those 80 deaths, I managed to kill four bosses. One of them I found fairly easy, so let’s say the other three took around 25 attempts each. That’s a lot of time spend dying, respawning and travelling back to the boss fight.

The game looks great, first and foremost. I was immediately reminded of the original Legend of Zelda on NES; the colourful 16-bit landscape is somewhat beautiful in its simplicity. There’s quite a lot of map to explore, and you’ll travel through varying areas – ruinous castles, forests, icy mountains and marshy wetlands. Each area has a distinct feel to it, and the atmosphere is created by some particularly awesome orchestral music. For a retro-looking game, I was surprised just how exceptional the music is. I expected some polyphonic 90s throwback; instead my ears were treated to a grand and beautifully composed score.

It’s unfortunate then, that a world which feels vast and open, and waiting for you to explore it, is marred by the fact that there isn’t actually anything for you to do in it. The landscape is merely a backdrop as you walk from boss battle to boss battle. Whilst parts of the environment look interactive, there’s very little to do besides walking and admiring the landscape. In a game where there are no upgrades, no collectibles and no items to interact with, such a world feels somewhat vacuous and wasted.

The all-important boss fights are spread out across the map in varying locations. They’re not too difficult to find, although some are more obscured than others. Luckily, there’s a save/respawn point fairly near to each of boss’ lair, so you’ll never have to backtrack far after each inevitable death.

Back to those deaths: Titan Souls is all about one hit kills. Should a boss hit you or touch you in any way – you’re history. Back to the spawn point and start all over again. The positive flip side of this is that most of the bosses are one hit kills, too. There’s a few exceptions, of course, but the majority will die the very moment your arrow hits their weak spot. Without any abilities, the one movement you need to rely on is your dodge roll/run. You’ll need to do that a lot to avoid the attacks of the bosses whilst you try to figure out your strategy. Figuring out how to kill one of these behemoths, and then successfully actioning your plan to bring it down, will fill you with a feeling of satisfaction and victory more genuine than most other games. It really feels like a true achievement; especially if you’ve cracked it yourself without having to resort to looking online to find some kind of guide to tip you off on a particular beast (and trust me, it will happen). Alas, the game offers you no reward, except a semi-satisfactory animation of you forcefully removing the arrow from the monstrous corpse. There are no experience points, no loot and no level gains to be had. You simply go on your merry way onto the next boss, and start the process all over again.

In its nature, the game is repetitive. It’s kept varied and attractive by the multitude of different bosses to bring down, as each needs to be approached very differently, but the time you spend traversing the map and retracing your steps from the spawn point to the boss after every death soon gets tiresome. Titan Souls takes an insane amount of patience, and unfortunately I think developer Acid Nerve has seriously overestimated the concentration span of the average gamer.

Despite everything that’s good about the game; how nice it looks, the amazing soundtrack, the great enemy designs, the one fact that cannot be overlooked is its relentless and unforgiving nature. As your death toll mounts up, your enjoyment continues to wither. It’ll peak right back up when (and if) you manage to slay your next beast, but once more the repetition of constant death will wear you thin.

The concept of Titan Souls is unique and intriguing, but it feels very foreign not to level up in some way, and not to have items and upgrades to earn and collect. Because we’ve come to expect it from almost every other game we’ve played in our lifetimes, we expect every boss battle to reward us with something, be it an upgraded weapon, or an extra life to combat that one hit instant death. Alas, no such relief will ever be given – that’s Acid Nerve’s design, and however frustrating it may be, I accept it as a unique feature of the game.

By all means, you should give Titan Souls a go. There is a great game to appreciate, underneath the inexorable encounters with death. However, it’s a shame that only the most truly committed players will ever be able to get the full enjoyment and reward that Titan Souls offers. The majority of us will just give up too quickly, having lost hope after the hundredth fruitless demise.

Titan Souls is available digitally on PS4, PS Vita and PC. We reviewed the PS4 version.