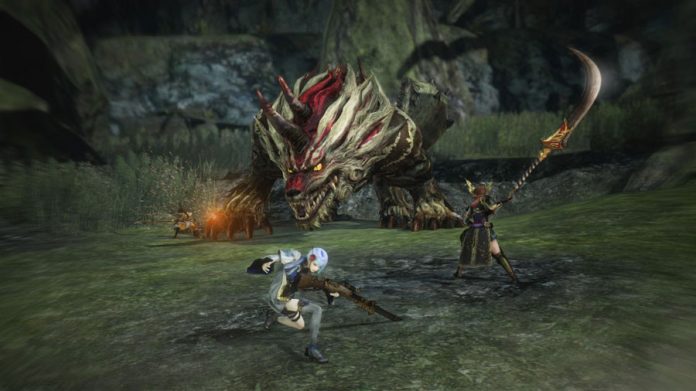 Released in 2013 for the Playstation Vita, Toukiden: Age of Demons was a resounding success for Omega Force, creators of the divisive Dynasty Warriors games. With many similarities to the Monster Hunter series, it filled a gaping hole in the Vita’s library and was also a visual tour de force for the under-appreciated handheld.

Whilst a sequel is very likely to be in development as I write, in the meantime Omega Force hope to build on the success of the original title with an expanded revision in the form of Toukiden: Kiwami, now also available on Playstation 4 as well as the Vita. The question is: is there enough quality new content to make this full price release worthwhile to those that have already extensively played the original?

For those that haven’t played Toukiden: Age of Demons, the game is about a group of warriors that call themselves Slayers residing in Utakata Village. Their mission is to wage a war against the mysterious Oni, demonic creatures that have entered the human realm via a portal, and prevent another portal from opening. Whilst the story is passable and merely exists to set a backdrop for the slaughter of the Oni, it does have its moments of intrigue and the characters are genuinely interesting. Gameplay is split into two distinctive phases: preparation in town, and battle out in the field. In town it is wise to get in the routine of gaining various boosts for the next battle by visiting a shrine and bathing in the pool with your companions. You can also talk to NPCs and upgrade weapons, armour and Mitama (which are souls of great warriors devoured by the Oni) to develop your combat abilities. Veterans of Toukiden: Age of Demons will be happy to discover that this new version features an additional story roughly the size of the original.  In addition, Kiwami includes three new weapon types, new Mitama, the ability to upgrade equipment using soul steel, and the option to send a secondary squad on missions to obtain extra crafting materials. Fans will also be pleased to know that the lovable Tenko has also been given some attention. Tenko (your cute cat-like companion) can now be customised by feeding her numerous items to change her colour and voice. More interestingly, you can now meet her on the battlefield where she will follow you around and offer valuable assistance.

The main draw of Toukiden is battle. Whilst normal Oni are merely fodder, the large Oni have to be tackled systematically and you will spend most of your playtime tackling these gargantuan beasts. To defeat large Oni you are required to target and maim specific body parts until they eventually drop off, leaving a ghostly appendage in its place which is more susceptible to your attacks. Purifying the severed body parts awards crafting materials – but failing to do so will see them eventually returning to the behemoth, undoing your hard work.  All in all the battle system is fairly simple, with normal, strong and special attacks on offer along with various skills provided by your equipped Mitama. For when the going gets tough there is a “Devastator” attack, which is guaranteed to cut off a body part, but new to Toukiden: Kiwami is the “United Devastator” which sees your team working together to perform a move that is truly devastating to your foes. Fighting alone is not necessary, as you can take along up to three surprisingly efficient computer controlled companions into battle with you. However, whilst their assistance when fighting large Oni is invaluable, they often run off and kill all the small fry before you get the chance to. Aside from progressing through the main story, players can also engage in a variety of missions available in phases, which can be played in either single player or online multiplayer. These missions play exactly the same as story missions, but offer slight variations of Oni difficulty and the environments you fight them in. Truth be told, it’s a shame that these are separate from the main story mode as it would have been much more fun to play through the main story in co-op. However, if you are serious about creating new equipment or completing quests then these are vital as they provide you with much-needed materials. New to Kiwami are also emergency missions which are impromptu battles with large Oni that offer increased spoils, and infinite missions which are endurance battles where you vie to defeat as many Oni as possible in one chain.

Whilst it’s great fun combatting the large Oni and developing your slayer, eventually it can all just feel like too much of a grind and the fights are simply too drawn out. With your foes having excessive amounts of health, the slayer’s moveset just doesn’t really offer enough options to keep the battles interesting for long periods of time. It’s not a case of difficulty either, as fighting the large Oni is generally a simple affair of watching for their signposted moves, evading them, and then returning to the fray to administer more punishment. You can speed up the battle by crafting and upgrading equipment but the materials required to do so are relatively rare and the game does a poor job of telling you where you can obtain what you need. Graphically, Toukiden: Kiwami is nothing special but it does look good considering it’s a port of a Vita game. The framerate is silky smooth, and whilst the graphics are technically basic, the art style is a joy to behold with great looking enemies, characters and equipment. The game’s soundtrack is well made, with enjoyable music throughout that is bolstered by great sound effects. However, I was disappointed by the lack of an English dub. All dialogue is spoken in Japanese with English text, and whilst this isn’t too much of an issue during the story scenes or when engaging in conversations in town, in battle you miss what your companions are saying unless you take your attention away from the task at hand which is not ideal.

Overall, Toukiden: Kiwami is a great game that is marred by repetition. With a huge amount of missions and quests to complete, as well as weapons and Mitama to acquire, there’s well over 60 hours worth of entertainment to be had. No other game on the Playstation 4 or Vita offers what this game has: epic battles against gargantuan beasts. Whilst the Japanese dialogue and repetitive nature of the missions will be a barrier for many players, those who look past these hurdles will find a massively enjoyable and highly rewarding experience. Those that have played the original Toukiden: Age of Demons and are looking for more of the same should consider this title essential, whilst those new to the series would be wise to jump straight into this much improved revision.

Toukiden: Kiwami is available on PS4 and PS Vita. We reviewed the PS4 version of the game.