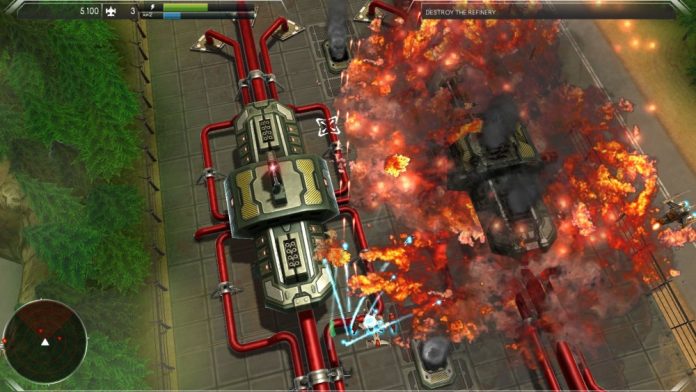 Bullet hell. That’s the term usually attributed to old-school scrolling shooters that feature an obscene amount of projectiles for you to avoid.

When done right, bullet hell games can be hugely rewarding despite their often insurmountable difficulty, but without the right amount of care and attention they can end up being just a harsh lesson in frustration.

Whilst Project Root may not have as many bullets vying for your destruction as some other games in the genre, the odds at times are still overwhelming, and unfortunately the end result is mainly the latter.

Paying homage to shoot’em ups of old, Project Root takes the tired old shooter formula and hopes to inject a shot of new life by giving the player the opportunity to explore. No longer are you propelled along a 2D plane with waves of enemies serving as mere timed shooting galleries; here you are fully in control of your ship and its destination, determining your own pace as you engage in both air-to-ground and air-to-air combat. Ultimately it feels like the old Strike games from the 16-bit era, but with a futuristic spacecraft instead of helicopters. Despite this twist, the game just doesn’t make effective use of the space it provides you. It’s nothing more than mediocre – although you’re free to fly around the environment, the nature of the game is quite linear so there’s no point in venturing off course. Upon starting a stage you are given an objective and an arrow will point you in the direction of it on the edge of your minimap. From then on it’s simply a case of following the indicator to locate your objective, completing it, and then awaiting your next. Rinse and repeat until the stage is complete and you have a particularly dull game, especially when the objectives are repetitive in nature. It truly ends up feeling like a wasted opportunity, as with a more dynamic mission structure it could have brought a breath of fresh air to an otherwise stagnant genre. Featuring an experience system, Project Root rewards long-term play by enabling you to upgrade your ship with skill points once you level up. Your ship’s speed, firepower, defence and manoeuvrability can all be developed over time, which is a godsend, as past the first real stage the difficulty is rather brutal. Airborne enemies swarm and flank you, forcing you to think carefully about your counter manoeuvres, whilst grounded foes bombard you with a barrage of projectiles. This wouldn’t be too bad, but many a time I found myself catching a hail of bullets that came from behind me, undetectable and unavoidable in the heat of battle due to the game’s keen camera placement. It also doesn’t help that the flying enemies sometimes get stuck on objects in the environment, rendering them nearly impossible to kill whilst they opened fire. Most important though is the lack of feedback you get as the player when your ship takes damage. I often struggled to establish when I had been struck by a stray bullet as there aren’t really any audio or visual clues. Whilst the controller vibrates when you are hit, it also vibrates for a lot of other environmental occurrences rendering the feedback moot. Presentation is also not Project Root’s strong point. It has an uninteresting story told by static, unvoiced screens between missions, and tiny text boxes that appear in the corner of the screen during gameplay. Trying to read these usually results in your death, so you quickly abandon all hope of actually following what is going on in order to concentrate on the action. The graphics and audio are also quite uninspired and do nothing to elevate the package, although the frame rate remains smooth throughout.

Overall, Project Root can be enjoyable at times, but largely it is just so bland and mundane that it’s hard to recommend. It’s a shame, because the game has some good ideas, but the execution is just so far off the mark that it ends up being little more than an exercise in repetition and frustration. I can only imagine the most devout of shoot’em up fans spending any considerable time with this title I’m afraid.

Project Root is available on PS4 and PC. We reviewed the PS4 version of the game.