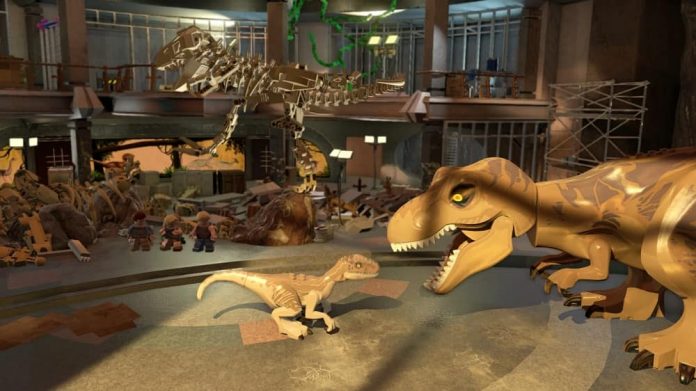 LEGO Jurassic World is the latest offering from Traveller’s Tales, the team behind the ever-popular LEGO game franchise.

Jurassic World has been released synchronously with the movie of the same name, and whilst it has many of the traits that we’ve come to know and love about LEGO games, it also shows many signs that it’s been rather rushed to get it out alongside the film.

It’s no secret that LEGO games have followed more-or-less the same formula for the last 10 years, since LEGO Star Wars was released. It’s a very popular formula, with LEGO games shamelessly flying off the shelves every time a new one releases. LEGO Jurassic World is no different: you smash ‘n’ build your way through a series of levels that retell the story of the three Jurassic Park films and the brand new Jurassic World. The levels feel just like any other LEGO game. Despite the addition of dinosaurs, the actions and puzzles you’re required to complete each level could be lifted out of any previous LEGO game without much differentiation. It’s still fun to play, but the generic template is getting rather tiresome and personally I feel like the franchise needs something of an overhaul. From the minute LEGO Jurassic World is booted up, it’s obvious just how rushed production was in order to get it out to tie in with the film. There are glitches and bugs galore. Now, the odd random glitch is no stranger to LEGO games, but LEGO Jurassic World is perhaps the biggest offender yet. The game completely froze every time we switched to John Hammond in the first game, with the only remedy to completely restart the game. At one point, I switched from one character to another in a different area only to be greeted by a camera that swung wildly from side to side until I quit. Characters get stuck in the environment very often; I changed to a T-Rex to then not be able to switch back to any other character. That’s just a very few random bugs that we encountered – and if Traveller’s Tales’ reputation is anything to go by, it’s very unlikely that the game will be patched at any point. After so many games based on the same template and built on the same engine, these kind of bugs should have been ironed out many iterations ago. It’s a shame, because without these glitches the game would be very solid and fun to play.

Graphically, LEGO Jurassic World looks nice – it’s perhaps the nicest looking LEGO game to date. The character models are sharp, and the backgrounds are smooth and very well designed. The audio is “interesting”, for lack of a better word. The voices are a mixture of new recordings and audio ripped from the actual films. Whilst this helps to make the experience more authentic and entertaining, it means that at some points, the audio quality is very poor, and the constant differentiation in quality makes it feel very disjointed.

Despite the generic template, LEGO Jurassic World is still a lot of fun to play. Outside of the levels, the hub is fun to explore. Like LEGO Marvel, the hub has taken on aspects of open world gameplay, with many different side quests and missions to complete spread out over a large map. There’s plenty to do, and upwards of 30 hours’ gameplay to sink your teeth into. As far as content goes, there’s plenty of value for money in this title. Overall, if you’re a fan of the LEGO games, you’ll not be disappointed with LEGO Jurassic World. Whilst the volume of glitches encountered do hinder the experience somewhat, it doesn’t detract too much from the enjoyment on offer. Yes, it’s rather repetitive and formulaic, so if you’ve already tired of LEGO games in the past, you won’t really find much new on offer here (besides the opportunity to play as a T-Rex), but if you’re still a LEGO fan there’s plenty to enjoy.

LEGO Jurassic World is available on all major formats. We reviewed the PlayStation 4 version of the game.