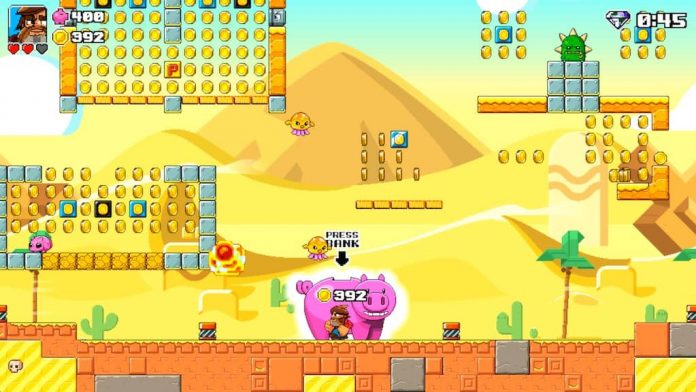 With its retro style pixelated graphics and catchy yet repetitive music, Big Pixel Studio’s Mega Coin Squad wears its heart on its sleeve. This is an old school, back-to-basics platformer that places emphasis on addictive and challenging gameplay, and I’m happy to say it’s also a huge heap of fun.

Single player mode is the main focus of Mega Coin Squad and sees you depositing coins in a piggy bank in order to complete levels spread across five worlds. The first three levels in each world require you to deposit a set number of coins to progress – and to make it more challenging, the levels are increasingly abundant with enemies and hazards out to stop you. Getting hit by an enemy or projectile causes you to lose a life and drop all the coins you are currently carrying, so you constantly have to weigh up whether it’s safe to carry on collecting more coins or make your way back to the piggy bank to deposit those that you have. The final level is essentially a boss level in which you have to defeat waves of enemies in order to obtain and deposit the world coin. With five characters to choose from, each with slightly different stats and abilities, there’s plenty here for retro gaming fans to do, especially when you take into consideration the character upgrade system that necessitates you to complete gruelling challenges within levels. The first three levels in each world all offer you the chance to earn three diamonds: one for finishing the level within a set amount of time, one for finishing the level without losing a life and a final diamond for finishing the level by depositing all the coins required in a single trip to the piggy bank. Obtaining these diamonds enables you to upgrade your character in numerous ways, such as unlocking new weapons and power-ups to be found in levels, reducing the number of coins lost when you are hurt and adding time to the challenge clock. The problem is these challenges quickly become gargantuan in difficulty, mainly due to the insanity of the later levels which throw enemies and hazards at you at an alarming rate, and partly due to the controls that are quite frankly troublesome at times.

In addition to jumping and throwing Ryu-style fireballs, each character is also able to stomp down to the ground from the air and charge upwards or to either side, destroying enemies and obstacles as they go. Due to the random nature of the levels, which more often than not place coins in structures high above ground level, you’ll be needing to make use of the charging manoeuvres a lot in order to reach higher ground and break through blocks. The trouble is, it’s sometimes a bit finicky. The frantic nature of the gameplay means that sometimes when you want to charge upwards you’ll end up charging forwards or vice versa. It’s only a minor niggle, and totally avoidable if you play cautiously, but when you’re playing against the clock it’s little things like this that tend to grind you down. Not only catering to the single player, Mega Coin Squad also features a fun local multiplayer mode too. Competing to be the victor across a number of rounds, up to four players can take part in four match types, grabbing coins and attacking other competitors as they go. Staying fairly faithful to the single player mode, the matches are fun and frenetic and our time spent with it was full of laughs. Both quick and custom game modes are provided, so you can cater your multiplayer battles to suit your preferences, or quickly jump into the action. Whilst it’s disappointing that there are no online options provided, it does make for an excellent party game when you have people around thanks to its simple premise and addictive gameplay.

It’s hard to not be charmed by Mega Coin Squad. Behind the cartoon-like and colourful visuals lies a challenging beast of a game that infuriates, yet draws you in to have “one more go”. Of course “one more go” is rarely that. I often found myself repeating levels for more than half an hour trying to beat challenges, cursing the screen with each death. To me, that alone speaks volumes. Sure, the controls are sometimes irksome and there’s no online multiplayer, but these are just minor issues in a rather delicious slice of retro gaming action. Recommended.

Mega Coin Squad is available on PC, PS4 and Xbox One. We reviewed the Xbox One version of the game.