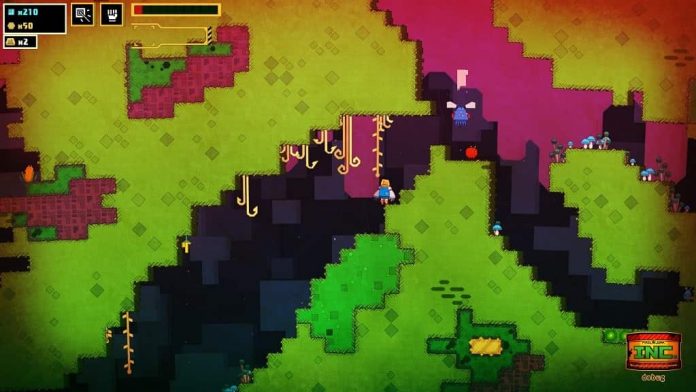 Soup, soup, and more soup. Soup is the aim of the game in Nom Nom Galaxy, and nothing else really matters. Unfortunately, there’s not much excitement to be had with a tin of soup. Nom Nom Galaxy aims to change that, but is it a soupy success or a bothersome broth?

Nom Nom Galaxy, a PixelJunk game from Double Eleven, teeters somewhere between genres: it’s part platform-adventure, with a set goal and level structure, and part open sandbox, willing you to explore the world and build upon it however you see fit. Imagine Terraria crossed with Super Mario… if Mario was more interested in making soup than saving Princess Peach, that is. The trouble is, it tries sp hard to fit into these two categories that I fear it actually falls down the cracks between; it has some good ideas, but I’m not sure if they’re polished enough for the game to be a true indie hit.

You’re a strange alien-like creature, recently recruited by SoupCo – a company, as you may have guessed, specialising in making soup and shipping it across the galaxy. It’s your job to ensure SoupCo’s share of the market soars high above any other, and stays that way. That means making sure soup production keeps going quickly and efficiently, that multiple varieties of soup are being concocted, and that your soup factory is protected from any attack from your soupy competitors. It’s a lot of responsibility for one employee, but with the help of various robot assistants across the factory, it falls into your hands to ensure everything runs as smooth as… well, creamy soup.

Graphically, the game is a treat. The graphics are fairly simple, but the clean 2D animations are pleasing to the eye – and for a game of its type, it’s refreshing to see it didn’t go down the “retro” route like so many others do. It plays smoothly and is complemented with easy to grasp, intuitive controls. Unfortunately, it’s the actual gameplay which lets Nom Nom Galaxy down. There’s plenty to do, but as far as the main campaign of the game goes, it’s rather repetitive and is certainly not a game that will appeal to the mass market. Fans of Minecraft and Terraria are likely to find themselves more at home here than the average gamer, but I feel the premise of the game lacks any real pull to keep you playing. The gameplay mechanics take a little getting used to, and whilst the tutorial levels are rather handy, you still feel a little like a fish out of water on the first real level. It takes some serious patience to get to grips with everything you need to do, and for most, successfully completing the first few levels is going to be a real case of trial and error. That said, for those willing to put in the time and effort to succeed will be rewarded with a great sense of accomplishment of seeing their tins of magical flavoured soup whizz off through the atmosphere.

Exploring and traversing the 2D landscape feels very similar to Terraria, though thanks to your buzz saw you can move through soft blocks very quickly – there’s no hacking away with pickaxes here. It’s fairly fun to explore, and the environments are varied and fruitful, with many ingredients to collect and enemies to encounter. The enemy combat system – if you can even call it that – falls a little short of the mark, though. Whilst you can equip weapons (or use your default fist or buzz saw) to attack, killing enemies rarely feels satisfying although it’s a necessary component of the game. There’s no feeling of control, and besides a minuscule health number pop up above the enemies’ heads, there’s no sense of having inflicted any damage. To make your soup and get it shipped off around the galaxy, you need to build a factory – and the building of your factory can be a bit of a pain. It’s a case of putting together various individual components (the office, the soup machines, the shipping pods, etc.), and joining everything up with a series of corridors. Sounds simple in practice, but getting everything in a suitable layout to work can be rather frustrating, especially when everything needs to be build in straight lines and the terrain is often far from even – and your buzz saw isn’t exactly very precise when it comes to “landscaping”. Once you have managed to build a successful factory, however, it’s fun to watch everything come together and run like clockwork.

Aside from the main campaign of Nom Nom Galaxy, there’s a wealth of other modes to try out. There’s multiplayer functionality, as well as challenges that change over on a daily basis, meaning that there’s constant new content for fans of the game to enjoy. The daily challenges are a mixture of tasks, ranging from shipping x amounts of soup in the quickest time, to racing from point A to point B of a map as fast as you can.

Nom Nom Galaxy is a decent little game – but probably won’t appeal to the mass market. I’d heartily recommend it to fans of sandbox games, but if you’re new to the genre you might find yourself a little disappointed. The premise of soup shipping is a little dull, and whilst the graphics are nice and the game plays very smoothly, the game lacks any real meaty substance to sink your teeth into.

Nom Nom Galaxy is available on PC and PlayStation 4. We reviewed the PS4 version of the game.