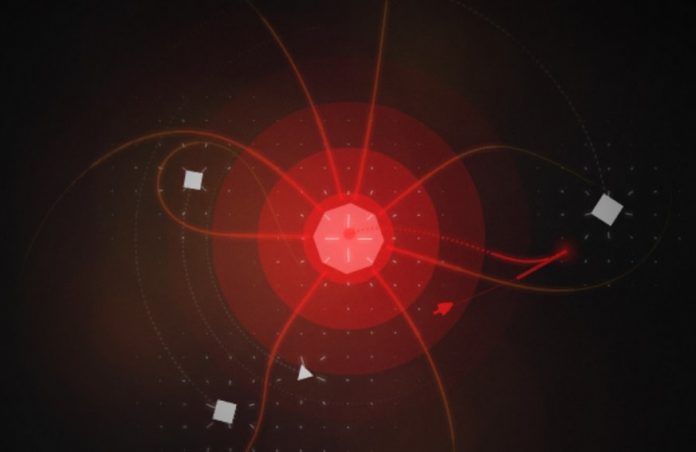 With an original and minimalist approach, 0rbitalis is a hybrid of a retro puzzler and a “satellite simulator”, which has the player use trajectory and angles to navigate across the atmosphere.

Focusing on a space and science theme, 0rbitalis certainly has a lot of interesting ideas going for it. Centred around the concept of using gravity fields, it has the player launch a satellite into space and tasks them to stay within a zone for an allotted time, all the while dodging asteroids, stars and other probes. Credit goes to Alan Zucconi, the creator of the game, for this ambitious idea and merit has to go out for the amount of work put into this. The content for this game is plentiful and varied. With 100 levels spread across 11 sectors, each with their own individual challenges, there is a lot of content to play through, which is great for a game currently priced at £6.99. Although some of the earlier levels can seem similar, the later levels offer a good change of pace, keeping the experience refreshing. The objectives range from keeping your satellite within the atmosphere, to targeting asteroids and blowing them up as quickly as possible.

As you go through the missions, there is an updated leaderboard that indicates how far you’ve come, which keeps you motivated to do a better time. Another element to the level variety is the daily challenge map. With the combination of several objectives, a daily map and up-to-date leaderboards, the game does well to provide a good amount of content. Unfortunately, it’s the gameplay itself that lets 0rbitalis down. One of 0rbitalis’ main focuses is on the idea that you can play the game with one click of the mouse. Credit goes out to implementing this simple mechanic, though if you are a player that enjoys having full control, this element may not be for you. Once you’ve clicked where you want your satellite to go, using a path-line indicating its destination, you have no more input into its direction. It makes playing the game simple, but it means that should you find yourself on course to hit an asteroid, you have no control over changing your path. It’s because of this that Orbitalis is very much a trial and error game.

Now, it’s not like the game wants you to fail. If you don’t get through a mission, it will leave a red marker where you last launched, which is helpful in gathering where to go next. However, when you start crashing into something several times, it can get tedious. There’s no real tutorial or any kind of guide to explain how the mechanics work or how to use gravity to your advantage. The first few levels are basic enough to gain an understanding of the controls and for you to ease into it, but without any sort of tutorial to remind players about certain aspects, it can feel like the game is throwing you straight into the deep end. For hardcore puzzle gamers this might not be an issue, but to a more casual player, this may seem rather daunting, considering you take into effect the timing of your launch, the speed, the direction and other factors when you are playing. When you do finally pass a level, you can’t help but wonder if it was down to skill or sheer dumb luck. Challenging gameplay aside, the style of the levels are awesome. The minimal design works well, and is aesthetically pleasing, even if it’s a tad repetitive in the opening levels. The art style is partnered well by the music, which has a retro-science spark to it. It’s clear that a lot of work has been put into these aspects.

One of the best additions to the game is the Star Map creator. If you do ever get completely stuck on a level, it is a nice change of pace to experiment with making your own map and see how various objects react with each other. The first time I used it, I added about five other satellites which all exploded when they crashed into one another. The second time I used it I managed to make the satellite self-detonate on launch. Like the main game itself, it takes time getting used to, but it’s a great option to have and it gives you a chance to inject some creativity into the main game. You can download other user-created maps, as well as share your own for all the world to see.

For those who enjoy a challenging puzzle game that requires a good amount of thinking, then 0rbitalis is worth checking out. However, for the more casual gamer, the lack of any real instruction or tutorial coupled with the heavy reliance of trial and error may quickly become irritating. That said, the level editor offers good fun, and the gameplay can be rewarding for those willing to put in the time to figure it out.

0rbitalis is available digitally on PC via Steam.