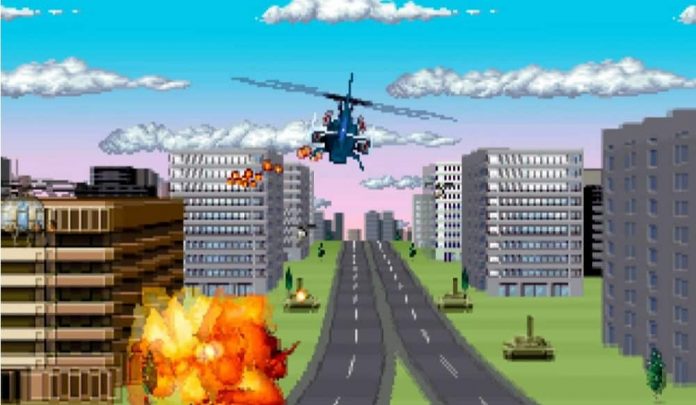 The most recent arcade game to join the Sega 3D series on Nintendo’s 3DS handheld is perhaps not one of the most famous Super Scaler games but it is one of the most innovative. So it’s time to “GET TO THE CHOPPER!” and shoot down the enemy hoards with 3D Thunder Blade.

The original Thunder Blade coin-op was released to arcade audiences in 1987, following on from the success of games such as OutRun, Space Harrier and Super Hang On, it used the same Super Scaler technology that allowed the hardware to scale graphics quickly and smoothly allowing for what was, at the time, a unique 3D effect. Thanks to the hardware contained in the 3DS it is able to give a more convincing 3D effect than ever for these games, as seen in the already converted titles such as After Burner II and Galaxy Force II. Once again developers M2 have done a sterling job of porting the custom hardware over to the handheld. The original game was heavily based on the classic TV series Blue Thunder and even went as far as stealing a digitised image from the show as its title screen! The genre is shoot ‘em up, but with a pretty unique twist – the levels alternate from a third person perspective into the screen viewpoint and a viewed from above vertically scrolling style with some fancy 3D effects. Both styles of level are based upon the same objective: destroy as many enemies as possible and take out a boss. The into the screen sections have both air and ground-based baddies with the added hazard of some very tall buildings getting in the way too. The vertical sections are a bit more traditional and straight forward. Your actual chopper is armed with both guns and missiles, the latter of which are very much needed for the huge bosses. You can also control the speed of your copter too.

The 3DS version of Thunder Blade adds a number of special features that can’t be found in any of the other versions. Firstly, on the lowest difficulty, collisions are turned off, meaning you can’t slam into the pesky buildings by mistake while trying to avoid enemy fire. I liked this feature a lot as it was far too easy to die in the original game. Next M2 have added a mode that simulates the hydraulic cabinet of the arcade game, shaking the screen all over the place – this is a clever feature but ultimately a very pointless one. Back to the good features and you will find that M2 have also added a couple more levels, which is a very welcome addition given that the original game was pretty short. There are also a number of other more minor options that can be activated such as changing the colour of your chopper and altering the scoring system. Graphically Thunder Blade is just stunning; the 3D effect is almost mesmerising and massively improves the overhead sections especially, adding a real sense of depth. In the audio department it’s not as great, but that is no fault of M2: sadly Thunder Blade just doesn’t have the iconic soundtrack of many of its other Super Scaler brethren. All in all, the gameplay on offer is pretty good. I do have to say that you will suffer many unfair deaths, but then again, you did in the original. There is also very little variation in the standard gameplay, but what is there has been implemented very well – and most importantly it’s fun to play. At a price point of just £4.49 from the Nintendo eShop it offers good value for money and is certainly worth downloading, especially if you were a fan of the original game.

3D Thunder Blade is available digitally from the Nintendo eShop on 3DS. 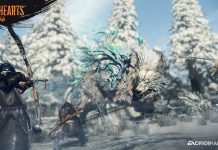 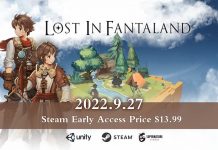 Lost in Fantaland is a Genre-Straddling Card-Battler, Out Now on Steam Early Access