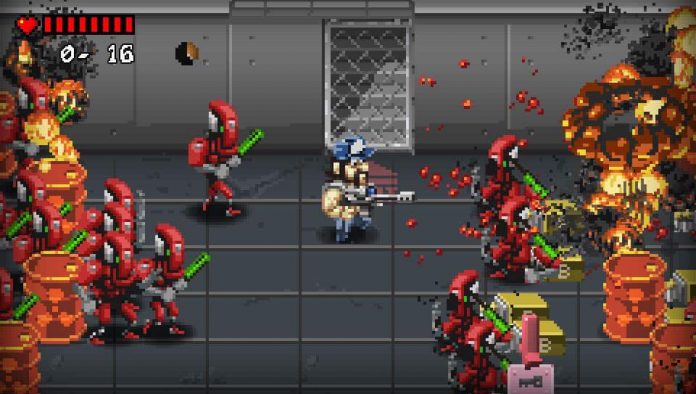 It never ends well for aliens in games, does it?

Regardless of where they’re from or how advanced they are in comparison to us, they always end up staring down the protagonist’s barrel or twitching under their mighty boot.

Except in Angus Hates Aliens, where it’s a stereotypical redneck farmer complete with a trucker cap and a white vest who was abducted from his farm. “I guess my minions weren’t enough!” the supreme leader quips, flying off in a 50’s-era saucer, whilst you restock from an A-Team styled van. Make no mistake; this is not a straight-faced game. Brought to you by Team Stendec, Angus Hates Aliens is a side-scrolling pixelated shooter that calls back to the 8-bit era, becoming all too familiar with anyone that’s played Megaman or Metroid Prime. If you want to sum the game up in as few words as possible, it’d be “run and gun”. But don’t assume you can just hold down the trigger for a few hours until it ends, as Angus Hates Aliens is joyfully sneaky. You meet different varieties of aliens complete with unique characteristics. You have the quick, nimble type who suffer from brittle-bone disease and go down with one shot, there’s heavyweights who amble around with or without armour depending on the level – and soak up an entire magazine like it’s a gentle breeze – and even some laser sword-wielding robots with a strong desire to see what your insides look like on the outside.

In total you’re facing 16 different flavours of enemy that you can take on with just as many weapon types. You are never told how to kill, but you are allowed to learn. For example, every time you score a hit, you see the enemies’ health flashes up, so it allows you to register which guys are weak and which are strong. Some weapons are best used against certain types as well. If you get a mob of the sprinters, crack out the shotgun for quick and easy kills. Hints will flash up for new weapons so you’re not left completely alone. There’s even a flamethrower and a laser rifle! They will swarm on you, however. You’ll clear a room to get a key or press a switch, only to have a brigade appear from behind. They’ll crawl out of doorways, alleyways and strafe sideways just to get to you. Switch to the wrong weapon at the wrong time, and its back to the checkpoint with dented pride but renewed determination. It gets hairy in quite a few places, but you’re still smiling. That is until the game unfairly spawns a horde where you’re unable to prepare for it, or where you simply can’t see it. Frequently, the game will spawn enemies in areas you’ve already cleared but have to back-track through. This becomes tedious pretty quickly but can add to the tension of staying alive after using the last of your medkits.

So simple run-and-gun this isn’t, especially when you’re limited to only carrying nine items. This is quite ingenious, because you have to strategise but there’s no hint of what lies ahead aside from boss battles, so it’s a bit hit-and-miss at times. Bullets will stack, but medkits won’t (similar to Resident Evil 4). You can store items in the multiple lockers dotted around the place, but for the most part I filled those with medkits as enemies drop money and ammunition like there’s no tomorrow so you’ll never run out of ammo, but you’ll also never be drowning in it. Angus even satisfyingly chirps “Nice!” every time you collect an item. The game’s overall feel is a positive one. The scenery is decked out with surprising detail, and the visual effects are impressive. The various explosions are very smooth and contrast well with the overall colour scheme. You’ve never straining to see the action, and you’ll rarely miss advancing enemies. Whilst it can get busy on screen, it’s never overpowering. The enemy animations are wonderful and their sound effects call back to the yester-year 2D scrollers but with a modern twist of smoother animation and 21st century sound effects. You can move in four directions during gameplay – left, right, up and down – and you can climb ladders or enter buildings. Sometimes the terrain will funnel you a certain way which can be a problem when scenery in the foreground obstructs your view. There are also notable instances where the game suggests you can go a certain way (such as a man-sized hole in a fence) but our good friend “invisible wall” makes an appearance. Fortunately, these are few and far between, but at the time they’re frustratingly annoying.

Despite all that, it is still a hugely enjoyable game. It’s satisfying to play, above all else. It’s a nostalgia trip that’ll please most of the older generations, but it’s modern enough to satisfy the newer. You don’t have to be into CoD or Battlefield to enjoy it either, but if you find Dark Souls easy then perhaps give it a miss as it isn’t particularly challenging. It comes with a short run-time – a little over six hours spread over 12 levels – and I’m not sure on the replay value, as once you’ve gone through it, there’s nothing really to play it again for as there are no secondary objectives or collectible items. But given that this game costs a fiver [at the time of writing], it’s fairly impressive

It quite literally is “run and gun”, but I wouldn’t want it any other way.