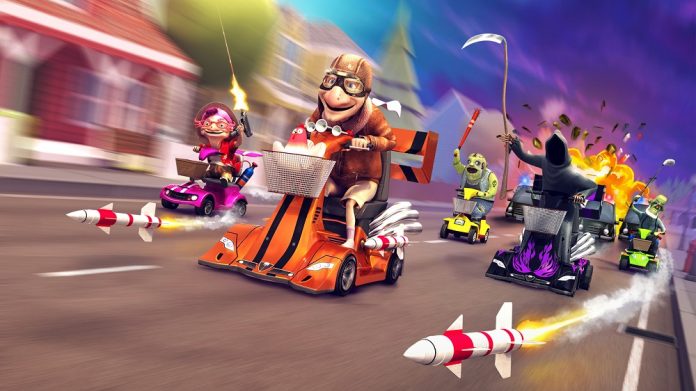 Coffin Dodgers is a traditional arcade-style kart racing game by developers MilkyTea in which elderly residents of a retirement village battle to out-race death on their mobility scooters.

The sense of humour is prevalent right off the bat and sets the tone for the simple yet silly gameplay experience. As you win races you gain money you can use to customise your mobility scooter for a faster top speed, better handling, faster acceleration, or for the ability to hold more than one track item at a time. The racing controls very well, although simplistic, and a gamepad would be recommended over a keyboard and mouse for the smoothest experience. You can charge up a melee attack to knock other racers off their scooters, or use a variety of items found along the racetrack to do the same. The campaign story mode pits you against death itself and the other elderly residents, killing them off and bringing them back as zombie racers as they place last in the scoreboard after each zone.

Although in very good condition with tight racing controls, great PC customisation options, and excellent racer AI, Coffin Dodgers does suffer from a few noticeable shortcomings. All of the five maps take place around a town setting – with the three required races changing slightly between each map. Due to this every race looks almost the same as the last, and can get fairly repetitive. Apart from a very few noticeable stretches where a race track briefly opens up into a larger area, usually by going underground, nearly all of the tracks are fairly small and tight, with many sudden corners that can send you flying off your scooter if you hit them too quickly. Add in melee attacks and two weapon items gained from crates which lock in one or more racers in front of you, and which can’t be easily dodged, and you have what may be at times a very frustrating experience as you’re constantly shot off your scooter. Similar to other racers like Mario Kart, you can be hit out of your first place position rather easily and sent back to the end, but due to the narrower maps and higher frequency of weapon drops you’ll encounter this almost endlessly, especially in multiplayer mode with skilled racers. A few stage hazards that appear in a couple of the maps such as UFOs, zombies, and larger objects to navigate between are a welcome addition and offer a method of avoiding or blocking the projectile weapons. These are too few and far between however, and the game would have benefited from implementing these in a better way as to add a further layer of depth and complexity.

Don’t let that completely dissuade you though. At the cheap price of £8.99 the few pitfalls of Coffin Dodgers are mostly outweighed by its tight racing experience, unique story and characters, and abundance of game modes which help to set it apart and hold its own against other kart racers. As with many racing games, Coffin Dodgers comes into its element when playing with friends and becomes much more entertaining when utilised as the party game it tries to be. Frustrations and annoyances in single player mode become things to laugh at in multiplayer, and you’ll be left with a much more joyful experience. Although not perfect, Coffin Dodgers is a worthwhile purchase for any die-hard arcade racing fan, or for anyone who wants to play a silly racing game with friends.