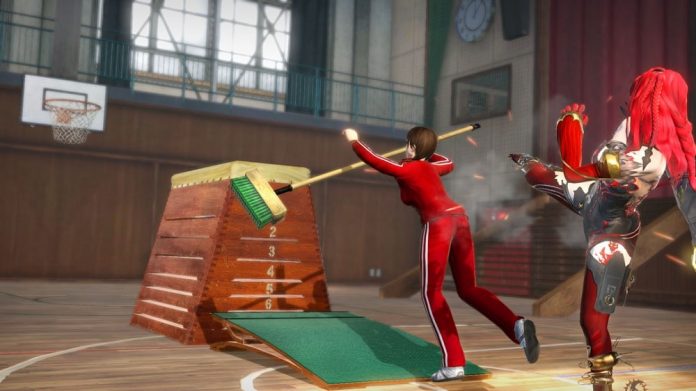 Do you ever feel like being purely evil, instilling terror into your rivals and causing them to suffer the most painful and humiliating deaths possible? If your answer is yes, then Deception IV: The Nightmare Princess might just be game for you. (Sadist.)

Last year we saw the PS3 and Vita release of Deception IV: Blood Ties. The game, something of a strategy-battle, told the story of Laegrinna, daughter of the devil, on a hell-bent mission to defeat her rivals and free her father from his eternal prison. Now, Koei Tecmo have followed up Laegrinna’s story with a brand new release in the form of Deception IV: The Nightmare Princess, released for PS3, PS Vita and for the first time, PlayStation 4. This new release features all of the original content from Blood Ties as well as a completely new quest mode, telling the story of Velgurie, an equally dark and sadistic being, determined to bring suffering to her foes. 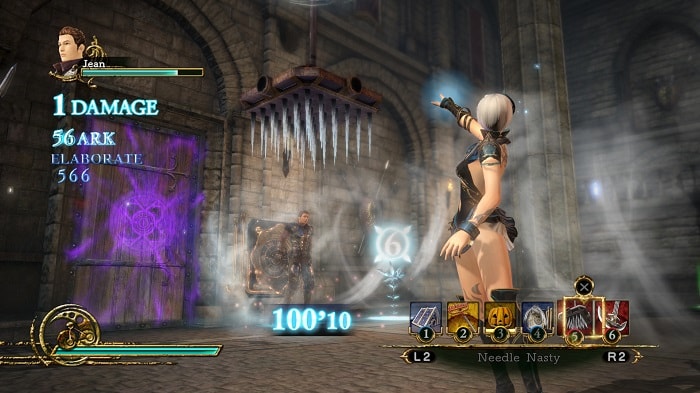 Quest mode makes up the bulk of The Nightmare Princess. Essentially, it’s a series of battles interspersed with short anime cut scenes that tell the story of Velgurie. The story isn’t particularly in-depth or absorbing; the focus of the game is on the quests themselves. The aim of the game is to destroy your opponents using a series of “traps” laid by you. You lure your opponents into a trap, then with a hit of a button you trigger the trap. It may be that an arrow comes flying out of the wall, or that a behemoth boulder tumbles from the sky, or a giant pendulous axe swings across the room and slices your opponent in two. This isn’t a game for the squeamish: the grizzlier and more degrading the death of your opponent is, the more points you’ll score.

You’re eased into the quests with a few very easy rounds, guided by a simple tutorial that covers the basics. As you progress through the game, new elements will be introduced and these are always accompanied by a brief tutorial. The guidance is very handy, but the text-based instructions aren’t always particularly clear and you may occasionally find yourself thinking “what..?!” Still, the basics of the game are fairly simple to grasp, and the control scheme is nice and easy to get the hang of. 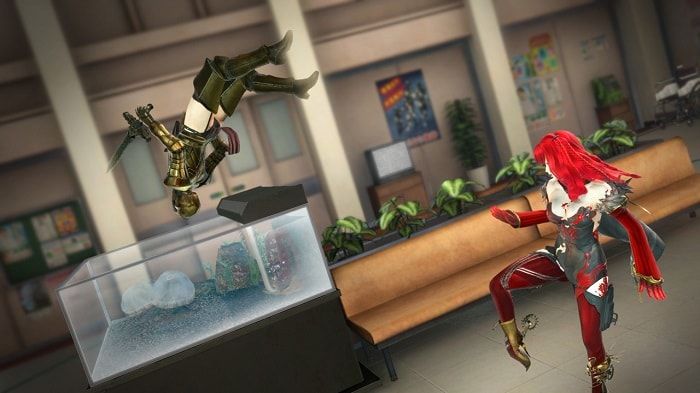 Each level of quest mode has a set of challenges to complete – there are four altogether, with one being mandatory in successfully progressing to the next stage. The challenges usually involve killing your enemy in a particular way; successfully killing an enemy with a 10-hit combo, for example, or finishing with a certain move or using a certain trap. Completing the optional challenges will reward you with unlockables such as new traps to punish your rivals with.

For each quest, you earn points depending on how stylish the annihilation of your opponent is. Points are awarded for doing more damage, but also for how humiliating your attacks are (for instance, having your opponent fly through the air for landing on a springboard only to land on a space where a giant pumpkin falls onto his head is pretty shaming). At the end of the round you’ll be given an arcade-style grade depending on how well you did. The scoring coupled with the optional challenges means that there’s plenty of replayability in Deception IV: The Nightmare Princess as there’s always extra rewards, or that better score, to be attained.

Deception IV can’t really be compared to any other game; it’s a very unique twist on the fighting game genre, thanks to the reliance on traps rather than using weapons or hand-to-hand combat. Working out the best combinations to use becomes more like a strategy game or logic puzzle than anything else – rooms are set out on a grid, and it’s up to you to anticipate your enemies’ movements and work out which square is the best to lay a trap on to start off a chain of events. Often though, it’s a case of trial and error – testing out the various implements at your disposal to find out what works best. Still, it’s just downright good fun to play. At least, it’s fun for a couple of hours. Battles can quickly become rather samey, despite having a variation of interesting environments and a range of tools at your disposal. I found that once I’d got a combination of traps that worked, I kept using the same method in every round, which soon got a bit tiresome. The challenges on each level attempt to dissuade this though, coaxing you to use different attacks every time – and those aiming for the high scores will of course have to be a bit more creative. 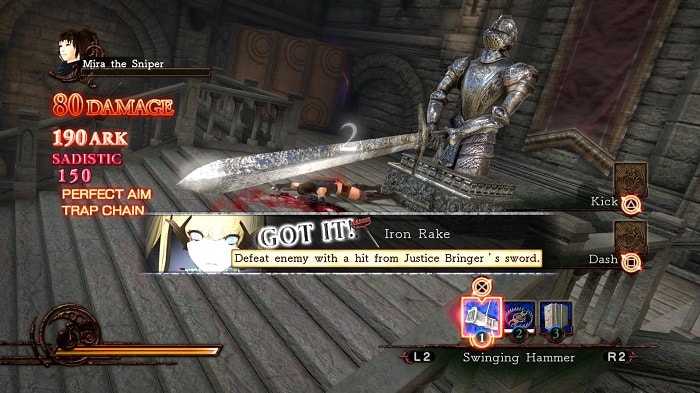 In quest mode alone, there’s over 100 battles to fight with varying paths you can take to completion, and on top of that there’s the entirety of Blood Ties to play through which offers around the same amount of battles again. A shortage of content is certainly not an issue here. In addition, there’s an enemy designer mode, which lets you design your own enemy, from their hair do to their weapon and even how much HP and strength they have. You can fight your custom enemies in a free play area to hone your skills and test out combos.

If value for money is a big deal to you, then you really can’t go wrong with the amount of content crammed into Deception IV: The Nightmare Princess. If you were a fan of Blood Ties, then the extra content in this follow up is bound to satisfy. It offers something original that doesn’t fail to deliver a good amount of entertainment – especially to those with a dark sense of humour (trust me, the various hilarious and brutal ways to torture your opponent are bound to shock and delight). Despite getting a bit repetitive, Deception IV‘s unique nature and seamless combination of battle and strategy makes it a title worth checking out.

Deception IV: The Nightmare Princess is available on PS4, PS3 and PS Vita. We reviewed the PS4 version of the game.