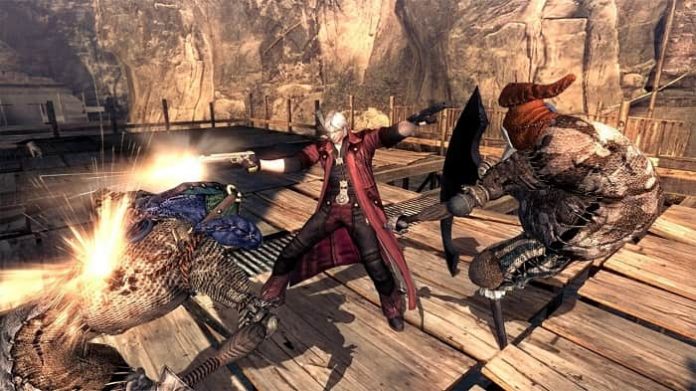 Released in 2008, Devil May Cry 4 was met with critical and commercial success despite criticism for reusing assets.

Introducing Nero, a newcomer to the series with a demonic arm that grants him unique abilities, players were presented with a rambunctious adventure across the city of Fortuna, and it was only after a considerable amount of progress was made that they were then thrust into the shoes of the iconic Dante to pretty much re-tread the steps they had taken to get there.

Whilst many fans of the series bemoaned that the game just wasn’t as good as Devil May Cry 3, they well and truly lost their minds when it was announced that the follow up would be a reboot by the name of DmC. Developed by Ninja Theory, known for the underrated Enslaved: Odyssey to the West and the cinematic Heavenly Sword, DmC was a fantastic game that added a more acerbic edge to Dante and the world he inhabited, but still, the fans were not impressed. Fearful that their beloved white-haired, gleefully cheesy and effortlessly cool Dante of old had been thrown to the side forever, in favour of a more juvenile, vulgar model, they maybe need not fear anymore. You see, old Dante is back. And whilst it may only be in the form of a remastered edition of Devil May Cry 4, its release gives a glimmer of hope that someday he’ll return in a direct sequel and restore harmony to the hearts of those that were ready to mourn him. Being a “Special Edition”, numerous tweaks and additions have been made to the game to truly make this the best version of it yet. Apart from the obvious spruce up of the graphics, the most significant change is that now you can choose to play through the story as Dante’s brother, Vergil, or his female companions, Lady and Trish. Complete with fully featured movesets, the opportunity to play through the game again with their unique play styles will be a boon to returning fans that have undoubtedly spent extensive time playing as Nero and Dante. It should be noted however, that whilst each of the new characters gets a new intro sequence, many cutscenes are edited or omitted completely when playing as them, leading to some jarring transitions between locations and scenes.

Also in this Special Edition are two features that were previously exclusive to the PC port of the original release: “Legendary Dark Knight Mode” and “Turbo Mode”. Not for the faint hearted, Legendary Dark Knight Mode ups the ante immeasurably, with you having to contend with a vastly increased number of enemies as well as taking increased damage. The Turbo Mode option on the other hand is comparatively mundane, simply enabling you to increase the game’s speed across all modes, should you prefer to play at a more breakneck pace.

Despite being seven years old it’s pretty amazing how well the game holds up to be honest. Rendered at 1080p and running at 60fps, the game runs silky smooth and looks nearly as good as some recent releases, although minor framerate drops have been reported when playing Legendary Dark Knight Mode on the Xbox One. The gameplay is also just as sharp as ever, with a combat system that affords a considerable amount of depth once you’ve unlocked a repertoire of moves for your characters. Granted, this a must for any game in which your aim is to kill with variation and style, but it’s notable that a game of this age offers a level of depth and complexity that many modern action adventure games lack. It’s not all roses though, for as good as the game is, it still has its fair share of issues, some new and some old. The camera, for example, was quite frankly troublesome in 2008 and it’s still no better here. Whether it’s hiding enemies off-screen, enabling them to get a cheap hit in, or causing control issues due to a view transition, the camera is sure to annoy and it’s a shame that is hasn’t been addressed. The new additions, whilst very welcome, also bring some balancing issues to light. Lady’s missile launcher is ferociously overpowered against standard foes, especially once it has been upgraded to allow charged shots. Whilst this wouldn’t be too much of an issue in itself due to her reduced manoeuvrability and melee options, it does allow the exploitation of the Legendary Dark Knight Mode to obtain a huge number of Red Orbs and Proud Souls very quickly, enabling you to prematurely upgrade your roster of characters.

One of the best remasters of recent memory, Devil May Cry 4 Special Edition certainly does not disappoint. Access Games has gone far beyond the call of duty by not only delivering updated visuals while maintaining the game’s fluidity, but by also adding a wealth of content that breathes new life into the title. True, the game itself is slightly flawed with its tiresome backtracking during its second half, but the quality of the gameplay on offer does more than compensate for this shortcoming. This is an essential purchase for fans of old school Devil May Cry, but those new to the series should seriously consider picking this up too. With deep combat, a wide range of difficulty and gameplay modes, and stellar audio and visual design, this Special Edition makes Devil May Cry 4 just as relevant today as it was seven years ago.

Devil May Cry 4 Definitive Edition is available on PS4 and Xbox One. We reviewed the PlayStation 4 version of the game.