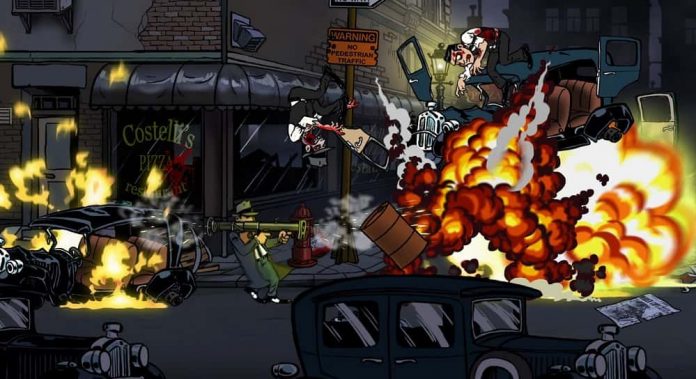 Guns, Gore & Cannoli is a shoot ‘em up animated side-scroller, set during the height of the prohibition era circa 1925, a time where crime is flourishing.

The “mobster” is on the rise and armed, organised crime takes a firm grip in society. Don’t expect your run-of-the-mill gangster warfare though. There’s zombies thrown in the mix too.

Guns, Gore & Cannoli sees us step into the shoes of the vicious, fiery enforcer for the mob, Vinnie Cannoli. Vinnie’s sent on a mission to the city of Thugtown, after a strange set of events causes a disease to ravage through the city, turning weak citizens into the shambling undead, plaguing the streets, killing and eating all in their way. Not that it bothers Vinnie too much, mind. Zombies are the least of his problem – Thugtown is also full of armed-to-the-teeth mobsters that don’t want you sticking your nose in their business. But that’s not enough to slow him down as long as occasionally grabs a bite of cannoli. Capiche? While the main story may be short, taking around four hours to complete, it makes up for it by being packed full of explosive and entertaining gameplay. Even though you only start out with a pistol, it’s not long before you’re shot-gunning, tommy-gunning and literally blazing your way through the murky streets of Thugtown. There’s a large variety of weapons at your disposal that are scattered throughout the various zones – and you’ll be needing them, what with such a diverse selection of zombies in the game to keep you on edge of your seat throughout.

For a short game, Guns, Gore & Cannoli is no walk in the park. It’s certainly not as easy as it appears on the surface, but with plenty of checkpoints and ammo drops, you’re able to try new creative ways of blasting through the ranks of zombies and mobsters alike. You’ll often find yourself surrounded by hordes of zombies and mobsters, so creative thinking will pay off. The game doesn’t get any easier as you progress, either. Ammo becomes scarcer, and precious cannoli supplies begin to lessen, so you must rely on your quick gun-slinging skills to get out of many hairy situations. Boss fights are especially taxing; you’ll definitely need to plan out some tactics before going in all-guns-blazing. Thankfully, the game does give you the option to lower the difficulty if it proves too annoying: even the normal setting feels very challenging. It should be noted that sometimes the game freezes momentarily if a lot is going on. This happened very infrequently though, and whilst it may be a little annoying, it’s not enough to dampen any enjoyment of rampaging through the streets of Thugtown. Whilst it may not be everyone’s cup of tea, the cartoon-style animation of the game is fresh and pleasant on the eye. There is a great amount of attention to detail in the environments and there’s plenty of variation in the character models, especially the zombie designs. The gore effects are a highlight of the game: whether you’re blowing out gurgling zombies’ guts with lethal grenades, or roasting undead hordes with the flamethrower, the effects are excellent and are sure to warrant a sadistic grin or two. The attention to detail is so fine that you can even see the zombies’ discomfort through their facial expressions as you mow them down. Guns, Gore & Cannoli is awash with entertaining sound effects too – the zombies will amass a lot of moans and groans during the gunfire and explosions, and Vinnie’s got plenty of one-liners up his sleeve that at first bring amusement, but can become a little tiresome.

For a short campaign, Guns, Gore & Cannoli packs in a lot of entertainment – though the game does lose its shine once you complete it. However,  the addition of up to four-player local co-op adds a replayability factor, and the die-hards out there will find more value in going back to get some of the more taxing achievements. For just £6.99, you can’t really go far wrong. Guns, Gore & Cannoli does exactly what it says on the tin: if you’re a fan of any side-scroller action game, in particular the likes of Metal Slug, this could be the quick little fix you need before the next big game.

Guns, Gore & Cannoli is available on PC, PS4 and Xbox One. We reviewed the PC version of the game.