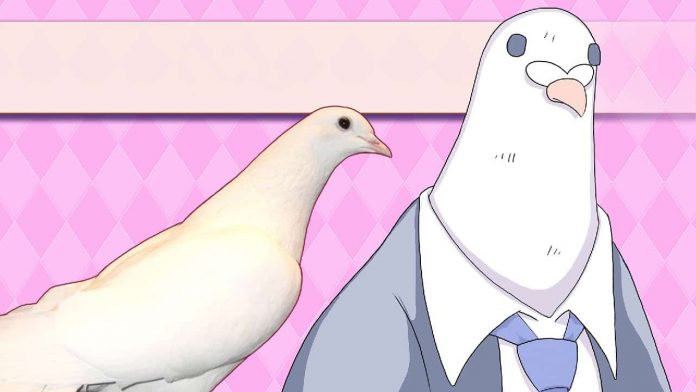 If there’s one thing you can be sure of today, it’s that you’ve never played a game quite like Hatoful Boyfriend.

Created by manga artist Mao Hato in 2011, it’s an outrageously crazy experience in the way that only Japanese video game creators can pull off – and quite frankly it’s all the better for it. And now, after a long wait, it’s finally available for Playstation 4 and Vita owners in the west to get their grubby little mitts on.

Hatoful Boyfriend tells the story of you, a female human student, as you start a term at your new school, St. PigeoNation – a school especially for intelligent birds. That’s right: birds, of the avian variety. You’re a human girl, and this girl chronicles your interactions and relationships with your feathery friends.

Touted as the only “pigeon dating simulator”, Hatoful Boyfriend is presented as a very typical Japanese visual novel, with a very cutesy overlay. Don’t let this fool you though – there’s more to the game than originally meets the eye. The gameplay is very simple – it’s more or less a case of reading through the dialogue on screen and clicking your way through. You’re occasionally given some options to pick between, but the majority is a case of sitting back and absorbing just how delightfully bizarre – and sometimes downright dark – this experience really is. From start to finish, the game takes around 90 minutes to complete. With multiple paths available depending on the choices you make throughout the story however, don’t let the perception of a short play time put you off – Hatoful Boyfriend is designed to play through more than once. There are over a dozen endings, each changing the story quite drastically. You’d be forgiven for thinking that each ending simply relates to which bird you’ve decided to try and romance – and whilst for the most part that may be true, there is one story path and ending in particular that completely throws the game on its head.

Discussing the nature of this dark and absorbing story in any way will only ruin the surprise as it’s intentionally designed to catch you off guard. What I will say however, is that the implementation is very clever, as you may have been playing the game for several hours thinking it really is nothing more than the funny dating simulator it appears on the surface (I certainly did). Referred to as “Bad Boys Love”, you should certainly seek out this storyline in at least one playthrough, otherwise you’re not really seeing the best of what Hatoful Boyfriend has to offer. Extensively prolonging the gameplay time and turning the game from a high school dating story into a thriller, it really is (literally) a gamechanger and will explain a lot more about the world in which Hatoful Boyfriend is set. My only gripe with the game requiring multiple playthroughs is that the first sequence of the game is rather long-winded, with not much input required from the player. Whilst you do get the option to “fast forward” through dialogue, it would feel a little more immersive if there were choices to make right from the get-go, rather than a string of character introductions to sit through.

There are many characters to get acquainted with – with more being introduced depending on the choices you make – and it can be a little difficult getting to grips with who’s who… what with them being birds, and all. At the start, the game gives you the option of displaying human portraits, which means that the first time you interact with a character, you’ll be shown their “human form”, which may help you distinguish them. Audio is also linked with characters, with certain background music playing depending on who you are talking to, which is handy. The music can grate a little though; there’s a mixed bag of audio tracks from chirpy melodies to well-known classical pieces, and whilst some are more pleasant than others, the constant change in tone as you quickly move from one character to the next and frequent repetition can get irksome.

Even if visual novels aren’t your thing, I’d hasten to recommend Hatoful Boyfriend. It’s a cleverly-written game, with surprises lurking under its pink and fuzzy surface ready to reward players for investing their time. Whilst some people may get bored having to replay the same segments multiple times, those willing to persevere will surely be pleasantly surprised by the breadth of content hidden under its bizarre surface.