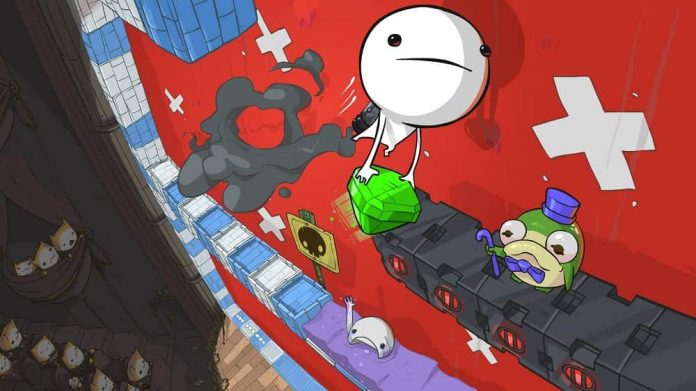 “Boys and girls, ladies. . . hmm and a-gentlemen. Turn the lights down low and shut your faces as I wrap you in the cosy blanket of a story; a story as heartwarming and soft as a mother’s kiss.  Or is it? Shhh. . .”

From The Behemoth, creators of Alien Hominid and Castle Crashers, comes this little gem of a puzzle-platformer.

Having grown up on early-90s platformers like Commander Keen and Cosmo’s Cosmic Adventure, and playing both of The Behemoth’s previous titles, it seemed only a natural choice to pick up the fabulous Battleblock Theater.

The Behemoth have advanced their status in the gaming world by finally adding actual speech to their games instead of just speech bubbles filled with witticisms and exclamations. They have employed the voice talents of Will Stamper of Newgrounds, StamperTV and OneyCartoons. Here, he is the much-loved-and-loathed narrator.

“A veritable FRIENDship, it was. Geddit?”

Okay, so, the game. We are told, in no uncertain terms, that we are the victim(s) of a most horrific shipwreck, featuring bad-tempered ocean currents, fabulous golden whales and sharks that look nothing like sharks, crash-landing us on an island in the middle of nowhere with naught but a creepy Chernobyl-esque Theater, run by… cats? I’d say “evil cats”, but that seems a bit redundant. Your leader, with the fabulous nom de guerre Hatty Hattington is captured and controlled by an evil top hat. Convenient name, no?

At a glance, the game has remained loyal to The Behemoth’s art style, made famous by Dan Paladin, artist of Alien Hominid and Castle Crashers. The facial expressions created by Dan Paladin exonerate anyone who feels guilty about enjoying a game style that was originally developed in Flash. The Behemoth has always had a penchant for adding ridiculous humour to their games: slapstick, intelligent and subtle. Alien Hominid featured rude (yet oddly appropriate to today’s society) billboards in the backgrounds along with rather comically overdramatic facial expressions. Castle Crashers featured a hyperbole of the “damsel in distress” archetype, more hysterical faces, clever plays on words (“the CatFish” anyone?) and references to Alien Hominid.

Battleblock Theater, however, owes the majority of its humour to Stamper’s narrative style and running commentary, where he often light-heartedly insults you (and your friends) when you screw up.

You play as a prisoner performer working your way through Acts and Scenes, on a stage, in front of an audience of the same sadistic cats that have caught you.

While they watch, you have to jump across deep lakes, avoid being roasted by lasers, impaled on spikes, eaten by weird Jackalope-Raccoon monsters, blown up by more cats or even blowing yourself for no particular reason!

Your “performer” can be widely customised to feature different heads, weapons and tools. They’re all completely unnecessary, but they can be quite a delight, especially if you’re playing co-op. (Hah, Co-op. I’ll explain this joke in a bit).

So you’ve picked your head and have been thrown into the first level, where you have to jump, climb and bounce your way to the exit, collecting sparkly green gems along the way, all the while being cheered on (or booed at) by the Narrator. To complete each level, you must collect at least three gems to open up the exit. Though the use of such tokens to complete a level isn’t exactly an original feature, it’s always a good way to get the player motivated with the “just one more” attitude.

For the perfectionists among us (myself included) the game cruelly gives you a grade at the end of each level, while Stamper makes a vague comment on it.

“There is an A+, but don’t bother because that takes talent.”

To increase your grades to the maximum, you have to collect all the gems, find the golden yarn (which can be used to purchase weapons) and finish the level in record time. Not as easy as it sounds. The fusspots will spend plenty of time re-doing every level to get the full A++ rank, which features a bonus of extra gems!

Choosing Stamper to be the commentator of Battleblock Theater is a fantastic choice. His unique style of narration neatly wraps up the game’s comedic value. Most games have achievements and completionist aspects these days, but having a sarcastic and witty voice in your ear telling you to work for the next level is both a blessing and a curse, depending on whether or not you’re one who had parents with ridiculously high expectations.

Gems and Yarn are currency in this theatre of broken dreams. Backstage, where you get to pick the levels you want to play, there’s a delightful shop where you get to use gems to purchase more heads for yourself and illegally trade yarn with your kit-nappers for weapons.

When I say “purchase more heads”, you’re technically releasing other prisoners captured from the wreckage of your ship and you can play as them instead. They’re divided, quite discriminately, into head shapes: triangle, square, rectangle and circle. There are “special” heads too, but you have to have played other Behemoth games to gain these, or by completing certain events and challenges.

When you pay your 10 gems to buy a new prisoner head, you’re given one at random. There’s a total of 256 purchasable heads (64 of each shape) – that’s 2,560 gems needed. A glorious way of keeping players hooked until they’ve purchased every single head. Completionism, ho!

But why are you wasting your time buying pretty new faces and tool-things when you should be out there pleasing your audience!

Each Act in the game contains nine regular levels, two timed “finale” levels and three “encore” levels (which are also timed!). You have to complete the nine regular levels to unlock the finale stages, which you must also succeed at in order to progress to the next Act.

The encore levels are completely optional, but if you want to satisfy the completionist in you and gain a few more shiny gems and yarn, you must brave these timed torture-scenes and finish them! I tried out these encore scenes and found them thoroughly stressful – they’re as unforgiving as the Westboro’ Baptist Church.

Try them if you wish, but don’t say I didn’t warn you! Also, when you run out of time, even if you’re millimeters from the end, you have to go back to the very beginning and do it all again; you can’t start from a checkpoint (which shows the time you reached it), which is incredibly frustrating. Here comes the aforementioned “co-operative” element. I say it like this because, when you aren’t working perfectly as a seamless team through the game, you’re killing each other in the most hysterical ways possible.

Most games that require co-operation, I’ve found, can cause strife between friends if they aren’t working together perfectly. Battleblock Theater mitigates the stress with these comical methods of killing each other in order to break the high-strung mood that can permeate the co-operative work. Very good idea!

On a side note, the music appears to be very light-hearted as well, though rather subtle when you’re playing with friends as you’re so busy trying to solve the puzzles.

Your ally can be waiting to be thrown by you across a wide pond to the other side, in order to advance; but then one of you has a change of heart and sadistically uppercuts them into the water instead.

The other will respawn instantly, but who knows what they’ll do next. Will they forgive you like the saintly Samaritan you just murdered, or will they exact sweetest revenge upon you?

The light-hearted killing of each other definitely adds more comedic value and, also, can create greater friendships than you already have as you enjoy murdering each other. When there’s two of you, however, the levels will all change (much like other games have done, e.g. Splosion Man by TwistedPixel). Suddenly, there are puzzles which will require both of you to put aside your differences and work together to get those sweet, sweet gems – a wonderful little addition.

You can only have up to two players in co-operative, but there’s also Versus mode: up to four of you (divided into two teams) can beat the snot out of each other. Yay, violence!

The levels, unsurprisingly, get progressively harder and harder. Tensions will rise and friendships will either solidify or fall apart like those tantalisingly frail ice creams you had as a kid that fell on the floor and you stood there crying while everybody else walked by. Ahem.

After those nine normal levels, you’re pushed head-first into the mouth of a crazy-cat door and onto the stage again for the finale levels. These are both timed so, as the narrator so eloquently puts it…

“Run like you have diarrhoea, and it’s starting to come out..!”

Each of the previous levels will introduce new styles of puzzles to test your mettle, skill and patience, but the finale levels cram all of these obstacles into two, high-speed, panic-inducing cry-fests. When you collect the gems required for the first one and jump through the teleporter, you’re hurled immediately into the second one to reach the final exit key at the end of it all.

Think you deserve a nice little reward for getting through all that? Sure! The audience watches you get stretched and stretched according to how well you did. They applaud and cheer, throwing roses at your distended knees; then cry “encore!” Just a few more things before you hurry off to buy this game.

Secrets! There are some levels that have extra levels inside them. These secrets can only be accessed by reaching a certain point in the stage. You may step on a platform hidden in a corner and you’ll be whisked off to a gem-tastic furore filled with teleporters, vanishing platforms and what-have-you, obstructing your crazed attempts to get the little green diamonds and the shining yarn.

Occasionally, in both single and co-operative modes, the narrator will alert you to a  shiny golden top-hat that has appeared somewhere in the level. Finding this hat and carrying it all the way to the exit will award you (or your friend, whoever is carrying it at the time) an extra ten gems.

I only have a small gripe with the game. There aren’t enough weapons to match the amount of yarn you accumulate to make it worth working for every ball of yarn in the game.

I have simply adored this game, and challenge anyone who enjoys solving a good puzzle not to love it too. So off with you, and go forth and play it!

“Buckle your pants! Pull up your socks and dance! Whoo!”

Battleblock Theater is available to purchase digitally on PC and Xbox 360.