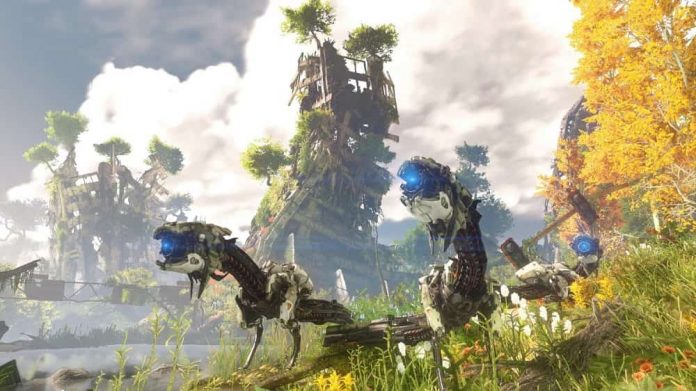 Humanity has been driven to the brink of extinction, forced to live off the land and under the radar of the mechanical beasts that now call it home. You play Aloy, pun intended I think, a young red-haired hunter during an age of great change. Resourceful and deadly with her hand-crafted bow at her side, she embarks on an adventure into a land undergoing a shift in its ecological paradigms, where the balance that has always existed between human and machine is shifting.

Horizon Zero Dawn is a third person action RPG being developed by Guerilla Games for PlayStation 4. It centres on Aloy, a young woman in a world overrun by mechanised, prehistoric-styled monsters. It is the studio’s first original IP since Killzone in 2004 and will be their first foray into the genre of action RPG. In this future world, the different tribes of humanity are struggling to survive. Each of these tribes will have their own unique and interesting stories for the player to engage with. I assume there are also regular animals in this world, given that the tribesmen shown are all wearing clothes made of animal skins. Whether they will be aggressive or not is another question. Will the machines be the only thing you have to contend with? The need to scavenge machine parts and gather resources is what dominates these people’s day-to-day lives. This is a fundamental concept of the game: the struggle to exist alongside these powerful beings and the realisation that humanity is not the dominant force in the world.

Aloy might favour the bow, but it will not be her only option when tackling the many challenges that riddle the post-apocalyptic world. She also employs a grapple device to entangle enemies and has the ability to set traps as well as a range of arrows from armour piercing to explosive tips that she can switch between and use to exploit weak points in even the largest of machines. Weapons that you knock off enemies can be turned against the robots in the heat of battle, but will not be permanent additions to your inventory. A lot of emphasis will be placed on exploration with health pick ups, via plants I assume, and the collection of various parts shed by the machine beasts. With the quick crafting menu Guerrilla Games are implementing, the player will be able to move through and upgrade their inventory without getting bogged down by menus. This will hopefully encourage the player to scour the map in search of secrets and upgrade materials and keep the action moving.

By fighting machines and progressing in the story, the player will gain levels. This will earn them points that can them be applied to the skill tree. This tree is left very open and players can decide if they want to focus on combat abilities or take the more stealthy approach and hunt your mechanised prey unseen. These enemies will not scale with you as you level up, but there will always be some element of challenge. The world will change as you play and it will continue to change as you make your way through the game. From the demo that was shown at E3, Horizon Zero Dawn appears beautiful and is a very exciting new title. Hopefully the developers of Killzone: Shadowfall will be able to live up to the high levels of expectation the trailer has generated. It looks promising but there is a precedent for misleading E3 demos and I really hope this isn’t one of them.

Horizon Zero Dawn is scheduled for a 2016 release. Pre-order now from Amazon.

Watch the E3 trailer below: