J-Stars Victory VS originally came out in Japan in March 2014.

We assumed it would be one more game in a long list that never sees a Western release, but we were pleasantly surprised to hear that it was getting localised for Europe and America. J-Stars Victory VS teeters somewhere between an action-RPG and a beat-em-up, and whilst it’s a must for any Japanese anime fan, I’m just not sure it does enough to capture the general Western audience.

Essentially a fighting game mash-up of a variety of popular Japanese anime franchises, J-Stars sports a large ensemble of characters for anime fans to take into combat. Some are recognisable, as their franchises have broken over into the western world, such as Luffy and co. from One Piece Pirate Warriors, Sasuke and Naruto from Naruto Shippuden and Goku from Dragon Ball Z, amongst others. The majority though were lost upon me, and I found myself constantly asking “who’s that?”. I’d have probably engaged with the game a little more if I had been more familiar with more of the cast, but it didn’t really hinder my enjoyment.

One thing you can say about J-Stars Victory VS is that it packs in plenty of content. There are four offline game modes you can access immediately, as well as a couple of online modes. Whilst Victory Road, Arcade and Battle modes offer a more traditional fighting game experience, the cornerstone of the game is the J-Adventure mode, in which you traverse an RPG-style map, visiting various locations and completing quests to unlock new areas and meet new characters to battle. Right from the start, you can choose between four characters’ stories to play through, and whilst they include more or less the same content, it adds plenty of replayability to the mode. The map is instantly familiar to anyone who has ever delved into a RPG before, so I felt right at home cruising my boat between islands and visiting new locations. It also adds a great deal of depth to the game, making it more accessible to others that either aren’t as familiar with Japanese games or aren’t massive fans of traditional beat-em-ups. 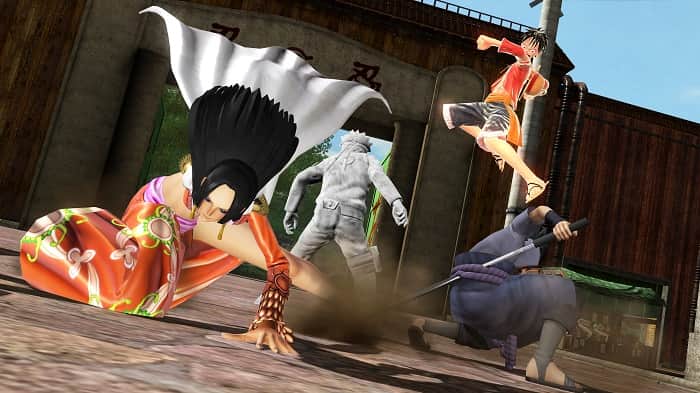 Not that J-Stars Victory VS+ claims to be a traditional beat-em-up, I might add. I was expecting more of a one-on-one 2D battle when booting the game up, but was somewhat pleasantly surprised to be greeted with a fairly 3D environment to run around in and track down my enemies. You fight in teams of two or three: you control the main character and the computer takes care of the others (although you can offer basic commands, such as “attack” or “focus”). The environments are nice to look at, with plenty of variety, and a nice touch is that everything is responsive: whack your opponent into a building and the whole thing will fall down on his head. The combat itself, however, is a little lacking in substance. The controls are very easy to get the hang of, with buttons assigned to light attack, heavy attack, special attack and block. That’s about it.  You can string together attacks into combos by bashing buttons, but there’s no button combinations or difficult moves to pull off here. If you’re looking for Street Fighter-style combat, then J-Stars probably isn’t the game for you.

As you fight, you level up your character and team mates, but this doesn’t seem to offer any real reward as your skill level doesn’t appear to change. The difficulty spikes quite quickly, and in the Arcade mode especially, the AI seems to deal much more damage than your characters. Whilst it encourages you to keep playing and practicing, you can’t help but feel that your success is largely down to luck more than skill. The camera also isn’t the best, often being the biggest obstacle between the taste of victory and bitter defeat. With battle taking place in 3D environments, you can travel in any direction – and so can your opponents. The trouble is the camera doesn’t always seem to face the way you’d like it to, so it can be hard to aim your attacks precisely, or block in the right direction. 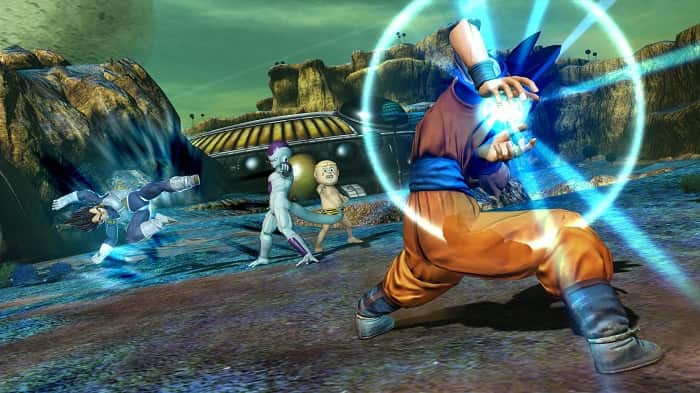 That said, J-Stars Victory VS+ isn’t a tournament-level fighter and doesn’t aspire to be. As a game that doesn’t take itself too seriously, the odd quirk and camera issue does little to detract from how much fun it is to simply play. The cheesy dialogue is packed full of one-liners and zany comedy that will undoubtedly make you chuckle (or at least roll your eyes). The overall presentation is great too; whilst the graphics might not be pushing the PlayStation 4 to its limits, the environments and character models are still well put together and pleasant on the eye. The music is a treat, with plenty of catchy J-pop in the background.

If you’re looking for a light-hearted game with plenty to offer, then you can’t really go far wrong with J-Stars Victory VS+. It’s undoubtedly a must for any fan of Japanese manga, but even those unfamiliar with the majority of the characters will find some entertainment in the presentation and gameplay on offer. Sure, it’s not perfect, but with plenty of madcap fun to be had, and an experience unlike much else currently available, it’s certainly worth a try.

J-Stars Victory VS+ is available on PS3, PS4 and PS Vita. We reviewed the PlayStation 4 version of the game.