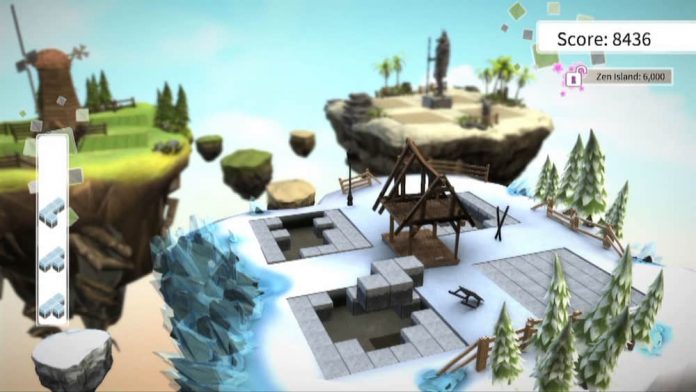 PieceFall is a charming puzzle platformer that’s taken the concept of Tetris to a whole new dimension – literally.

Armed with nothing but your brainpower and a pair of analogue sticks, you’re challenged to flip, twist and turn 3D blocks of earth to restore a broken land to its former glory.

Fresh from creator Steel Minions, this is the first fully published PS4 game to be built entirely by students. Made up of undergrads from Sheffield Hallam University, the team put in ten gruelling months of development time to get PieceFall to where it is today.

In methodical gameplay where perfection is key, players use a preview screen and the shadows of falling blocks to correctly place pieces and rebuild stunning landscapes that have been destroyed by a storm.

Each floating island is made up of 12 increasingly mind-boggling challenges, and your aim is to earn enough points to rebuild ancient monuments and progress to the next stage. Determined players with a strategic mind-set may feel a bit underwhelmed, as you can finish the game quite quickly once you’re on a roll, but at the incredible price of just 99p on the PlayStation Store, you really can’t complain.

But, if like me, you have embarrassingly poor spatial awareness, your patience may be tested as you move through the levels. There’s only one solution to each stage, so if you put one block out of place, you’re fresh out of luck.

However, the game combats any danger of rage-quitting brilliantly. Your progress is saved after each puzzle, and tantrums are soothed with plenty of trophies and the cool monument-building feature that gives you a clear visual representation of your progress. Plus, there’s something hilarious about losing your cool whilst trying to create a tranquil paradise. Although the game looks incredible on a big TV, this concept could potentially be awesome on a mobile device such as the PS Vita. The simple platformer style can become a bit repetitive, but the frequent saving points allow you to easily stop gameplay and revisit levels another time. On a mobile platform, this would be an excellent way to fill your procrastination quota while you’re waiting for the bus, ignoring important deadlines or avoiding eye contact on the tube.

The cheerful background music can become irksome after a while, especially if you’re stuck on a level and twisting the same block around for the fifteenth time in a row.

That said, this is a superb PlayStation debut from Steel Minions, and I can’t wait to see more. By making shapes 3D and introducing them to a horizontal plane, they’ve taken the hypnotic allure of Tetris and introduced it to a whole new audience.

If you ever find yourself longing to cleanse your eyes after a long, dull day, this game is a great choice. Bright, cheerful and bursting with colour, PieceFall provides a mental workout and rewards your senses before you even begin.

Piecefall is available on PlayStation 4.