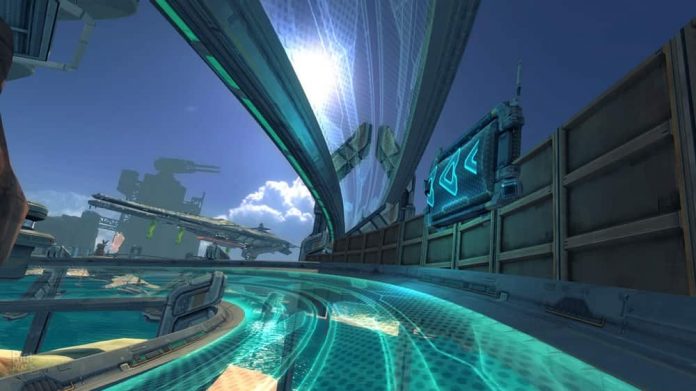 Whilst the Playstation has had many successful iterations of its exclusive futuristic anti-gravity racer WipeOut, the Xbox has never really had a comparative game of note.

There was the good but ill-fated Quantum Redshift, released on the original Xbox many, many moons ago, but with its utterly abysmal cover art and terrible marketing it’s now left buried in the past. Now, GameArts Studio seek to rectify the situation with their new title Quantum Rush Champions, a title that should certainly not be confused with having any association with Quantum Redshift if only because it’s not particularly good.

With no online or multiplayer modes, Quantum Rush Champions is a strictly single player affair. Whilst this will no doubt be a huge disappointment to those hoping to prove their prowess against other human competitors via the world wide web, it should give hope to those that enjoy a solid, lengthy single player campaign, right? Unfortunately the answer is both yes and no, as whilst Quantum Rush Champions does offer three lengthy careers to play through and an arcade mode that allows you set up races to your preference, the actual gameplay is somewhat lacking and leaves a lot to be desired. With a choice of three craft manufacturers at the outset, each has its own career mode that will see you make progress through 7 tiers of events. Starting at Tier 1, each Tier requires you to complete a varied amount of event types in order to progress to the next such as deathmatch, time trial, package collection or straight up races to name but a few. Perform well in these events and you may just earn yourself some craft customisation objects that will either affect the performance or appearance your craft, giving you a bit of an edge over your opponents. The trouble is that performing well is generally all too difficult a task.

While I found straight up races to be typically easy, obtaining golds on my first attempt, most other event types saw me struggle to achieve silver even after retrying multiple times. Deathmatches were the worst culprit thanks to the atrocious vehicular combat. Standard weapons seemingly have little effect on opponent’s crafts and their fire often gets swallowed up by the road, whilst the weapon pickups littering the track prove to be largely useless. A large part of the problem seems to be that there is a lack of catch-up in effect across the whole game, which causes issues as the pack will often charge ahead or drop behind you, making it difficult to gain kills. This issue persists into the boss events that occur at the end of each Tier, in which you have to face off against a rival in a one on one death match. Once you do eventually beat the boss you gain access to the next Tier, giving you a new selection of events for you to complete with but this time with a faster vehicle, just to add to your troubles. Graphically, Quantum Rush Champions is nothing spectacular but it is fairly pleasing on the eyes with its clean futuristic environments and well-designed craft. The game also seems to run very smoothly initially, with an impressive sense of speed as you move up the Tiers, but unfortunately framerate issues soon rear their head and spoil the experience, occurring mainly when engaged in combat. Like many futuristic racers, Quantum Rush Champions backs up its visuals with a dull, generic drum and base soundtrack, but even worse are its dreadfully weak sound effects. Adding to the troubles regarding deathmatches mentioned earlier, it doesn’t help that it is hard to tell if you’re being hit or if you’re successfully hitting the other racers as there are very little visual or audio cues.

It’s disappointing to have to be so down about Quantum Rush Champions. It really is. At the heart of it is a very solid racer with some well-designed tracks that are fun to race around at breakneck speed. Unfortunately though, the general difficulty of events and the awful combat aspects seriously drag it down. If you’re really desperate for a WipeOut style anti-gravity racer on the Xbox One then you may get a sliver of enjoyment out of this title, but be prepared to be frequently frustrated.

Quantum Rush Champions is available on PC and Xbox One. We reviewed the Xbox One version of the game.