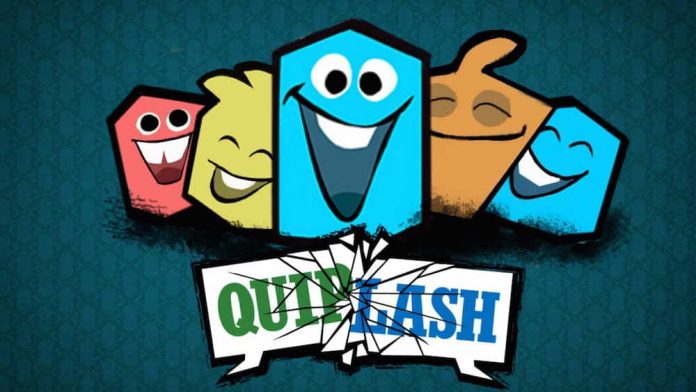 What’s the point in having a party with your closest friends if you can’t be completely rude and inappropriate with them?

Quiplash openly invites you to leave any political correctness at the door, and to be as funny – and as rude – as you possibly can be. And trust us, the more inappropriate you are, the more delightful this game is.

Quiplash is strictly a party game: you need at least three people to play a game, but the more players you have, the better. Up to eight people can be in on the action, whilst up to 1,000 (!) people can join in as “audience” members. I’m sure Jackbox doesn’t expect anyone to actually have 1,000 people in their homes playing this game with them, but it’s a great idea if you’re streaming on Twitch so anyone around the world can join in.

The concept is really very simple: Quiplash asks a question, or gives you a statement, and you have to answer it with the funniest thing that comes to mind. Once everyone has answered, your answers are matched against someone else’s and people have to vote for the answer they like best. And unless you’re playing with a group of nuns, trust us: the winning answers are going to be the most outlandish, revolting and hilarious. When the game asks for “a word that should never follow beef” we guarantee someone will answers “curtains” – and we challenge you not to laugh! A great feature implemented by Jackbox that we first saw in their incredible Jackbox Party Pack is that you don’t need multiple controllers to be able to play – each player just needs a phone or tablet. The game syncs with Jackbox’s servers to allow you to log in to jackbox.tv using your name and a “room code” that the game gives you. You then input your answers on your phone and it seamlessly links up with the game. It’s impressive how it works, and there’s barely any lag. We have encountered one or two smartphones that  won’t load the website, but the vast majority of modern devices work without issue.

The more you play Quiplash the more likely you are to find questions or statement that are repeated. Whilst this is a major issue in quiz games, here it doesn’t matter too much, as you’re not judging the correct answer but the most amusing. As long as you have creative-minded people to play it with, the fun is endless. The fun you get from it is only limited by the people you play it with. The prudish amongst us may get easily offended by other people’s answers – and they’ll also probably lose with their more straight-laced responses! If you’re having friends round and are looking for a great way to get the belly-laughs rolling, then you needn’t look further than Quiplash. If you’ve got a tumour in your sense of humour, it may not be your cup of tea, but otherwise this is by far one of the best party games you’ll play all year. The only problem will be getting your friends to leave once they’ve started playing…

Quiplash is available on PC, Xbox One, PS4, Xbox 360 and PS3. We reviewed the Xbox One version of the game.