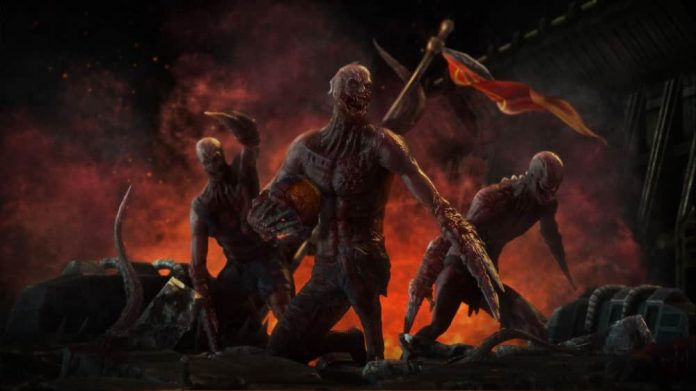 It’s the year 117 AE (After Earth) and a devastating virus has ravaged our home planet into complete oblivion.

Humanity has left Earth long behind in order to find solstice in the stars, and has chosen Mars as its final bastion of hope for the human race. Unfortunately, Mars shows itself to be an inhospitable land, and as the events of the game begin to unfold, so does the event on Mars known as the “Red Solstice” in which huge raging storms pound the human colonies.

During the storm, the human colonies on Mars all lose contact with one another and in particular with “Tharsis” – the colony with is dubbed as “The Capital”. The story primarily follows the soldier Tyler Hunt and his Alpha Squad as they are sent to investigate what has happened at the colony, and it’s not good news: the killer virus that wiped out Earth has appeared on Mars, and has already run amok, transforming its victims into retched, bulging mutated beasts. The storyline of The Red Solstice is stimulating, but it does lacks depth in its backstory; with such an interesting premise, it leaves you craving to find out more. However, what it may lack in storyline, it definitely makes up for in gameplay: the campaign is merely training for what’s in store at the end-game – multiplayer and survival mode!

The Red Solstice is a top-down strategy game in which you control one primary soldier, accompanied by three others in the rest of your squad, who follow your main soldier. Each soldier has dozens of customisation options, with a large array of classes that can make all the difference in the field, with heavy support, medics, snipers and even terminators. All of these classes have special abilities and weapons that will definitely prove useful in many situations, whether that be controlling the endless hordes, or taking down terrifyingly huge bosses to put you to the test.

Single player offers a dozen missions – on various difficulties it takes around 12 hours also to complete the campaign, which is fair with each mission lasting about an hour at a time. Whilst running through the campaign and getting used to the controls, you can appreciate the quality of the impressive environments; each has a dark and gritty feel to it, adding to the feeling of desperation to survive. Each environment offers different routes you can take to reach your destination, with some being easier than others, and some routes offering certain doom. Although there are already a handful of maps, each providing several different objectives and at varying levels of difficulty, it should be noted that since the game is still in Early Access, not all the maps have been released yet. Whilst visuals are impressive with the ever-gloomy environments, the sound effects were somewhat lacking. The near-constant gunfire and moaning of mutants can get on your nerves, although on the pause menu there is a very obvious mute button. Whilst I myself may have grown slightly weary of the constant barrage of noises, some may enjoy this feeling of this unceasing stream of chaos as your squad makes its final stand.

The multiplayer mode for The Red Solstice is somewhat an extension for the story of the game, and offers players a choice of various objectives and difficulties for each map. In multiplayer mode, you collect experience fairly quickly, enabling you to to rank up, change your soldier’s class and choose from a variety of weapons and special abilities to give you the upper hand when trying to contain the horde. Perhaps it goes without saying in a multiplayer game, but in The Red Solstice, teamwork is absolutely essential online. Running off on your own agenda usually doesn’t end too well, especially considering that as your objectives get tougher, the waves of enemies get larger and increasingly difficult to cope with – sticking with your fellow marines is critical for achieving victory. Even though the multiplayer is limited to select missions at the moment, soon we’ll gain access to more such as survival, and hopefully much more. Overall, whilst The Red Solstice may need some patches and fixes before its 100%, it’s already impressive and shows plenty of promise. This game is perfect for any lover of strategy, particularly so if you were a big fan of the likes of Dawn of War 2. With an interesting storyline that mainly helps to teach you the controls of the game more than anything, and plenty of endgame material and replayability, it’s definitely worth £14.99 – even more so once the online community begins to flourish. It’s a solid thumb’s up for a decent RTS multiplayer experience.

The Red Solstice is available on PC.