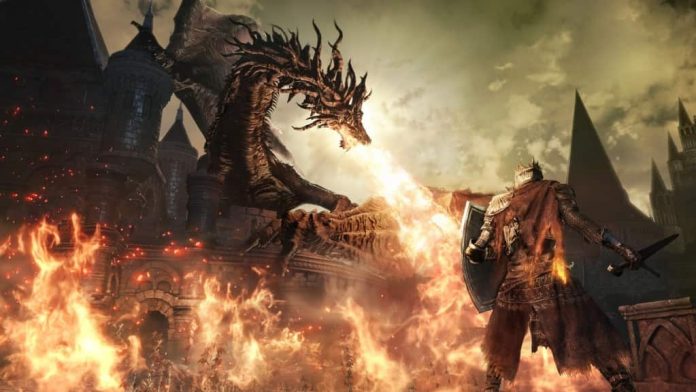 The age of fire has come to an end and the world has been reduced to a ruin of char and tinder. Embers glow in the dark and the flames striating the sleeping giant, shown in the Dark Souls 3 E3 2015 trailer, drink in the air as it roars to life. The rumour mill has been spinning wildly since its unveiling and people are readying themselves for what promises to be a return to form for the Souls series.

From Software’s latest nipple twister is set in a scorched land featuring a dark new hero set on a quest to hunt down and kill the lords of cinder. While fire and bonfires have always been a part of the Dark Souls series, it looks as if this title is really embracing the theme of flame and ash with one of the central themes said to revolve around an age of faded or withered beauty. It has been a long while since the release of the original Dark Souls on PlayStation 3, and while steadfast supporters of the series have been whetting their greatswords on the second installment, Hidetaka Miyazaki has been busy developing Dark Souls 3 alongside Bloodborne. The story of this game is supposedly centred on beings known as the “Lords of Cinder”. They, like Gwyn and the player character from the original Dark Souls, are creatures that kindled the fire at the end of each cycle bringing on the next age of fire. Each of these new boss fights will have at least two phases; apparently we weren’t having a hard enough time already – and needless to say these tussles will be no pushovers.

Like Bloodborne, Dark Souls 3 will be locked at 30 frames per second and could possibly be the Souls series’ last venture into the genre of dark fantasy. It has been reported that this will be a turning point for the franchise and that Miyazaki is looking to take it in a different direction. Might I remind you this is the studio that brought you Armoured Core and Tenchu. This could mean, and forgive me if I start drooling, a foray into science fiction mechs or ninja combat. Speaking of combat, Dark Souls 3 is reported to control very similarly to Dark Souls 1. That includes a parry and the ability to backstab, along with a new system they’re introducing called “weapon arts”. These appear to be different stances that your character can take that will alter the move set of your equipped weapon. Fans of archery will be glad to hear that they have made engaging enemies with a bow a much more viable option this time around, with increased movement speed and rate of fire.

With all this news and speculation floating around, it’s hard to keep my fingers steady as I drag my Solaire outfit from the musty depths of the hall closet and button it on tight, kindling the fire in my heart and tweeting non-stop “praise the sun”.

Dark Souls 3 is scheduled for an early 2016 release. You can preorder now at Amazon.