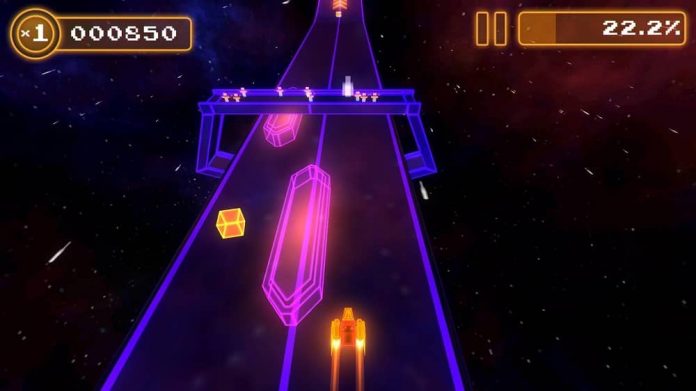 Hurtling down a neon track at breakneck pace, you’ll need zen-like concentration and lighting reflexes if you want to succeed in Spectra.

Littered with prismatic obstacles, the path before you twists and turns with reckless abandon, almost as if it wants to see you crash and burn – and more often than not, you will. Strangely though, you won’t really care, as with one push of a button you’ll be back on the road, tapping your feet to the utterly entrancing music whilst willing yourself along, sure that this time you’ll be victorious.

The premise is simple: simply stay alive until you reach the end of the track – although it’s probably not the type of “track” you’re thinking of. You see, each of the ten tracks that Spectra is comprised of is procedurally generated in accordance to its accompanying music track, and so it’s until the music stops that you’ve got to weave through an increasingly difficult cavalcade of obstacles. Essentially the backbone of the game, these music tracks which have been composed by renowned chiptunes composer Chipzel undoubtedly steal the show, with their infectiously catchy beats simultaneously creating the challenges before you and motivating you to overcome them. With each track clocking in at around four minutes, you only need to progress about a third of the way through in order to unlock the next, meaning you can easily unlock all ten of them within one hour. This may give you the impression that Spectra is a woefully short title but it would be unwise to jump to such conclusions – making your way to the end of each of the ten tracks on offer is not such an easy task. Whilst the first track or so gradually eases you in to the experience, it’s not long before the challenge ramps up immeasurably, throwing seemingly impossible combinations of obstacles, barriers and ramps your way, the result of which means that you could feasibly find yourself taking hours just to fully complete one track. Unlocking all ten tracks also enables you to play the hardcore versions of them. Only for masochists, these faster, more complex variations of the tracks are perhaps just too difficult to truly enjoy, but some may get some sick pleasure from the extreme challenge they offer.

Seeing tracks through to the end isn’t the only measure of success however, as like any classic arcade game it’s also a matter of obtaining a high score whilst doing so. Strewn across the road before you, manoeuvring into collectable yellow box-like objects is your main source of points, with a nice bonus awarded for collecting them in quick succession. To add an element of risk versus reward, points are also awarded for carefully skimming the obstacles that block your path, adding another dimension to your point scoring efforts. In order to achieve a truly high score though, what you really need is to fly over boost pads, propelling you forward with a burst of speed whilst also increasing your score multiplier. The caveat to the whole point scoring system is that points are not added to you bank instantaneously; instead they held in a sort of cooling-off period that lasts a few seconds. Performing other point scoring actions before the cooldown has ended resets the timer, enabling you to build a score chain that benefits from any multipliers you obtain. The trouble is, hitting an obstacle during the cooldown results in you losing all the points you’ve accumulated, which feels severely punishing at times given the amount of obstacles that are placed in your path. You therefore sometimes have to make a tactical decision to avoid collectables and boost pads in order to bank your chain.

Perhaps the biggest obstacle to enjoying Spectra is the somewhat floaty controls. For a game that’s all about lightning fast reflexes and precision, your ship just doesn’t feel as responsive as it should be. Don’t get me wrong, it’s not game breakingly bad; over time you learn to compensate for the ships nuanced movement, but there’s certainly room for improvement to be made.

To say that Spectra is addictive may be a bit of an understatement. Despite its flawed handling and extreme difficulty, I spent hours going back through the tracks in order to try and see them through to the end, and probably will continue doing so for the foreseeable future. Whilst it may not be the most feature-packed game ever released, it is immensely enjoyable thanks equally to its kicking soundtrack and almost trance-inducing gameplay. Fans of old-school arcade-like experiences would be wise to check this title out.

Spectra is available digitally on PC and Xbox One. Our review is based on the Xbox One version of the game.