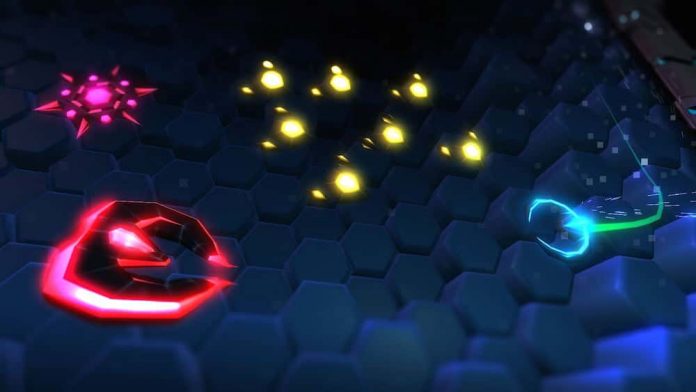 I’m not usually a fan of twin stick shooters; I prefer something I can really sink my teeth into, and usually anything with too much bullet hell causes me to ragequit pretty promptly.

That is, until I dipped my toe into Tachyon Project – and ended up diving in head first into its mesmerising and addictive space-age shooty action.

Developed by indie company Eclipse Games, Tachyon Project makes no secret of the fact that it’s heavily inspired by the classic twin-stick shooters and schmups of days gone by. It’s got the mayhem and control of any typical twin stick, but coupled with the range of weapons and special attacks you’d more associate with a shoot ’em up. The game is short and simple: there’s 10 levels to work your way through, each level made up of six waves with very clear-cut objectives. In one wave you might have to kill 50 enemies of one type, and in the next you might have to simply survive for 120 seconds. For the most skilled of players, working through these 10 levels may only take an hour or two, but for most of us, it’ll provide enough challenge to keep us entertained for a good several hours. There’s end-game content in the form of single- and multiplayer challenges, and score-seekers amongst us can always try to best their high scores.

Graphically, the game is very simple – but for a game like Tachyon Project, this works to its advantage. It feels retro, but with a modern veneer – everything looks razor sharp and the bold but minimal colours are striking in their simplicity. Each level is set in the same environment – a small rectangular area which is just slightly bigger than the size of your TV. It means you don’t have much room to manoeuvre your ship around, which can sometimes feel like a bit of a hindrance, but it encourages you to constantly be vigilant and learn to make use of all the space on offer. As each level progresses, you’ll be introduced to new types of enemies. Each enemy has its own unique traits and attacks – for instance, there’s a vortex, which sucks you in should you get too close, and a bull, which charges at you in a straight line. There are 30 enemy types in total, and their simple but vivid designs makes it easy to distinguish one from another and to remember their individual attack patterns. The gradual introduction of new enemy types is a clever choice and keeps the game feeling fresh and new, even in a repetitive environment.

It’s the time and health system which lets the game down. Rather than having “health” in the traditional sense, all you have in Tachyon Project is a timer. You gain time for every enemy you kill, but for every hit you take you lose time. The amount of time you lose basically depends on how severe the enemy’s attack is. Essentially, this means that you could have over 60 seconds on the clock, but one hit will see you dead. I can understand Eclipse’s want to simplify the HUD with one universal marker of your status, but in practice it really lets the game down. It’s impossible to know how much time a particular enemy will take off you, so it’s hard to measure how much risk you can take. It essentially boils down to a lot of the time, you can’t afford to take a single hit as you’ll either die instantly, or be left with so little time that you can’t possibly finish the level anyway. Your success in Tachyon Project is measured with a very typical arcade-style points system. Every enemy you kill rewards you with a set number of points, and for every kill, you gain 0.1x to your multiplier. When you take damage, your multiplier goes back to zero. In principle this is great, but there’s often times in the game where you’re not given any enemies for a solid few seconds, which costs you your multiplier (and also your precious time/health). After a crazy burst of a screen full of mines, snakes and smashers that you miraculously survived, it’s then anticlimactic to sit on a bare screen for several seconds. It’s also worth noting that when you die, you restart at the beginning of a wave, but you lose your score gained from the whole level.

As with any twin stick shooter mayhem, you expect a moderate level of difficulty – but Tachyon sure knows how to ramp it up when it comes to the boss levels (known in the game as “special enemies”). You’re “treated” to one of these every two or three levels, but the hardest by far was the second boss. I must have tried and failed at least 200 times before successfully downing the bastard, but such is the nature of the game that it made me want to persevere rather than quit. A word to the wise though: be sure to change your weapon types whenever new ones unlock, as these have a massive impact on your damage and skill level. The game doesn’t place much emphasis on your load-out, and I learned the hard way how much easier it can make your experience. It’s far from perfect, but despite its gripes and grizzly bosses, there’s something charming about Tachyon Project that makes you keep wanting to play. Its very simplistic nature makes it easy to pick up and play, making you want to indulge in “just one more level”. The timer system is frustrating, and frequently being told “you ran out of time” rather than “you were brutally one-hit-killed” gets rather irksome, but the quenching satisfaction of speeding around a screen filled with enemies as you blast every one of them into tiny pieces outweighs the niggles. Any fan of retro-style shooters certainly should give this one a go.

Tachyon Project is available on Xbox One,  Wii U and PC. We reviewed the Xbox One version.