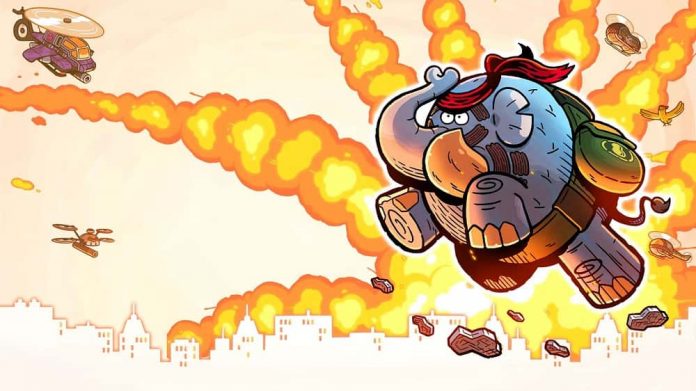 Sonic the Hedgehog. Ty the Tasmanian Tiger. Gex the Gecko. Ecco the Dolphin.

There’s been a lot of games with animal protagonists over the years and we’re well overdue a new one to enter the fray. Welcome Tembo the Elephant. . . but not only is he an elephant, he’s a badass elephant.

Developed by Game Freak, well known for their work on the Pokemon game series for Nintendo, Tembo the Badass Elephant is a game that harkens back to the golden age of platformers. Charging, jumping, spinning and spraying, you’ll control the titular Tembo across 18 stages on his quest to wipe out the invading “Phantom” army, and save any civilians in his wake. Gameplay is largely the standard platforming fare, with enemies to trample on, monkey nuts to collect and fiendish environmental hazards to negotiate. Luckily, Tembo has quite a wide arsenal of moves to achieve his task which makes him feel unlike any other platforming hero you’ve previously controlled. When you’re not charging at your enemies with the force of a 10-tonne truck, you can be spin-jumping at them in the vein of Sonic the Hedgehog, uppercutting them with the force of Mike Tyson in a bad mood, or using your heft to come crashing down on your foes like a tonne of bricks. Using his trunk, Tembo can also put out fires and water plants to create temporary platforms, useful for reaching hard-to-reach areas.

The game is split up into four distinct areas, each containing a number of standard levels and concluding with a boss battle. The standard levels see you making your way to the end point whilst defeating Phantoms and locating captive civilians that are generally hidden within the environment. Each enemy you kill and civilian you rescue adds to your “Phantom score”, and achieving set goals will allow you to progress through the game. On each stage, you’ll be wanting to collect monkey nuts, as collecting 300 of these will award you a nice jar of peanut butter (that’s an extra life to you and me). The levels start out nice and easy but quickly become rather challenging, especially some of the later levels that seem to throw entire armies at you in a tight area; the enemies’ projectiles making the game feel sometimes like a bullet hell shooter. Despite Tembo’s stature, he’s not the most robust of heroes, and in these later levels, death comes all too easily. I often found myself replaying the first, easiest level repeatedly, just to build up a nice stash of peanut butter. Don’t let the fiendish difficulty put you off though, as Tembo the Badass Elephant is, for the most part, a delight to play, and even its most troublesome areas can be overcome with patience, skill and practice. It also helps that it’s an absolute joy to look at and listen to: the cell-shaded graphics are beautiful, and the soundtrack and sound effects are notably pleasing to the ears.

A highlight for me, the game’s boss battles are a nostalgic trip for fans of old-school platformers. The well-designed bosses have distinct attack patterns and it’s up to you to observe and remember these to formulate an appropriate strategy to defeat them. Although at times they drove me to curse at the screen, I just knew that each boss could be overcome, and when they were finally defeated I felt a great sense of achievement that is often lacking in many modern platform games. Within the first few levels of Tembo, I was convinced that it deserves to be up there with the most revered of platformers. Its combination of humour, savage level design and colourful visuals make it an experience that feels familiar yet fresh and original. It also helps that Tembo himself is instantly likeable, which is notable to say that he is a 2D elephant who can’t talk. The game’s difficulty spikes may be an issue for some, but for those with patience, the experience will be hugely enjoyable and rewarding. In an age of countless shooters and open world adventure games, we only hope we see more of this grey-skinned badass in the future.

Tembo the Badass Elephant is available on PlayStation 4, Xbox One and  PC. We reviewed the Xbox One version.