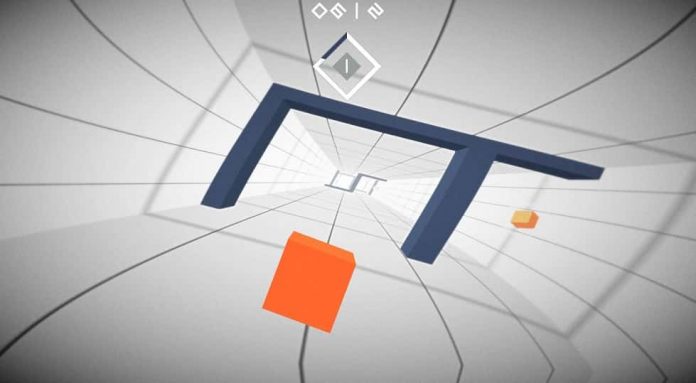 Imagine a game like Dark Souls, but starting at the end boss without any equipment or experience to your name.

Now imagine that whilst you’re also hurtling down a tunnel at 100mph. Impossible, right? Well, that should give you a little indication as to how tough Velocibox is. Strangely though, despite its swear-inducing difficulty, it’s both mesmerising and utterly addictive to play.

Created by Shawn Beck, Velocibox can only be described as a twitch-heavy puzzle game, albeit one that plays like and endless runner. With minimalistic yet alluring visual design, you control a box as it hurtles at breakneck pace down a corridor, obstacles quickly appearing before you to make your life a living hell. Tasked with collecting yellow boxes in order to progress, you have three options as your cube accelerates to its doom: move left, move right or flip, the latter of which seemingly reversing gravity for your cube. It all sounds so simple – and it is – but the sheer speed and complexity of the obstacles placed before you all come together to create an experience that can only be described as incredibly fiendish. Starting at level zero which acts as a tutorial, it’s easy to gain a false sense of confidence as you pick up the basics of the game whilst it’s holding your hand. The game knows this, taunting you with a cheeky “you are not prepared” message upon completing level zero, and you’d be wise to take heed, as it won’t be long before you realise that the message is not so much an insult, but a fact.

Within seconds of beginning level one you will undoubtedly die. The tutorial truly does not prepare you for the barrage of obstacles that are thrown at you right from the outset. As it’s over so quickly, you’ll try again, and this time you may just make it a little bit further before meeting your demise. And so begins the cycle of determination, hope, death and anguish, as you try, try and then try again to collect those little yellow boxes and make it to the next level. Originally released September last year for PC, gaining a legion of fans for its unrelenting brutality, this enhanced PlayStation 4 and Vita release of Velocibox sees players get a big helping hand that makes the game much more manageable, but still inhumanely difficult. Whilst PC owners of the game have to start from level one upon death, PlayStation 4 and Vita owners have the option of a level select, allowing you to begin at any level you have previously reached. This is obviously a great help as it’s hard enough to just beat one level, never mind multiple of them in a row, and it also enables you to experience the insanity of the later levels that you probably would have never reached otherwise. The hardcore of you need not fear though; you can play the game as it was originally intended if you wish via the Ranked game mode, which also enables you to post scores to a global leaderboard.

With only nine levels to complete you’d think making your way through them all with the help of the level select wouldn’t be too arduous, but even with this crutch I imagine that only a very small percentage of players will ever actually do so. You see, completing a level is a truly gruelling task; partly due to the sheer speed at which your box travels, giving you only fractions of a second to react, and also due to the levels’ ever-changing nature. Sure, you’ll find that some iterations of the same level are similar, but they’re never quite exactly the same, meaning that you are always kept on your toes. What you will notice however, is that each level has so many set patterns of obstacles, and so it’s your task to memorise them all, work out how to best negotiate them and then persist with the level in a cool, calm manner until you’ve beaten it.

Personally, I’m currently stuck on level seven. I’ve tried countless times to overcome its furious arrangements of boxes and pillars to no avail, but I’m sure I’ll keep at it whenever I feel the need to be humiliated. For those that do make it to the end of all nine levels, there’s a reward waiting for them in the form of “Super Velocibox” mode, granting you access to another nine levels that are even harder than the original ones. I can only imagine what horrors these additional levels have in store, but some masochists out there may find great pleasure from them.

Given its grave difficulty, it speaks volumes that Velocibox is such an absorbing and addictive game. With its simple premise and sharp controls, it really is a test of your reflexes, comprehension and coordination like no other. The striking visual and audio design are merely icing on an already delicious cake, further drawing you into the entrancing madness that is navigating a speeding box down a perilous obstacle course. For those that want a serious challenge, or even just a game to put their unsuspecting friends in front of for a laugh, Velocibox is essential.