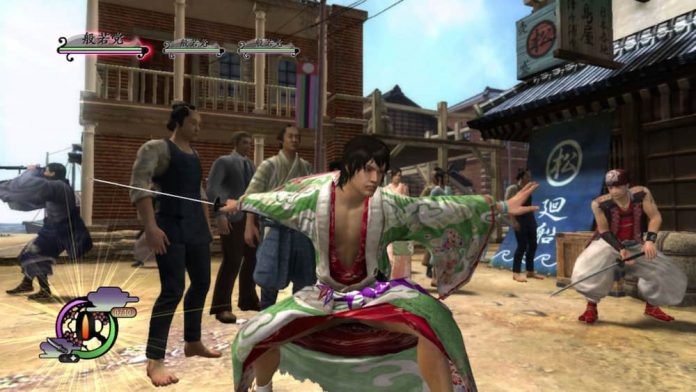 This is not a realistic interpretation of life according to the Bushido Code.

On the contrary, as a samurai in Ghostlight’s PC version of Way of the Samurai 4 you can disavow honour, forget loyalty and sidestep self control. This title is unconventional, wacky and downright weird at times. It’s fun but unfortunately, not enough to overlook the fact that it’s flawed in many ways.

Historical accuracy is not a priority in Way of the Samurai 4. As a lone swordsman, you arrive by boat to Amihama, a small town being torn apart by three warring factions: the Prajna, the Shogunate and the British. Yes that’s right, the British Navy are docked off the coast of Amihama and the town itself even has a “Little Britain” where you can buy sweets and watch horse drawn carriages roll by. The Prajna are hell-bent on opposing these foreign invaders whilst the Shogunate are trying to keep the peace.

You can choose which faction to line up with, and the missions you’ll play are different depending on who you’re allied with. This adds replay value to the game as it’s worth playing again to do the things you didn’t the first time. Moreover, you take your reputation into the following play-through which adapts accordingly, so if the townspeople grew to fear you then expect more law enforcement the next time. There are also multiple endings which are responsive to your allegiances and your conduct. Most of your time is spent hacking and slashing, but the combat is uninspiring. Although you will be engaged by groups of opponents you can only fight them one at a time. You can block and parry and as things progress you can learn different moves, but everything ultimately boils down to strong attack and weak attack. There is also a limited RPG element as you can strike up conversation with characters throughout the town to buy and sell items and take on side quests.

There is quite a bit to customise. From the get-go you can decide on the hair, face, body type and clothing of your samurai. It’s not all tough guys: you can select the so called “tender” option if being a baby-faced assassin is more your style. You can also buy new outfits in-game and modify and create weapons with the help of the swordsmith. In one act of hot-headed delinquency not at all befitting of a true samurai, I refused to pay for an expensive suit jacket and put the tailor to the sword when he protested. Regrettably that meant I had to play the rest of the game with no trousers – but it illustrates the fun you can have with the game. The swordsmith was much more rugged-looking so I didn’t mess with him and always paid promptly for my cold hard steel. However, behaving badly does have some consequences. Constables will target you and if you’re arrested you’ll be up against the Kinugawa Sisters who will torture you. This starts a mini-game where the objective is to survive. Here your half-naked samurai may have to dodge bricks thrown by masked slaves or dangle skillfully on a short rope above a burning metal horse which threatens to do more than just chafe. These weird sequences will not appeal to all, but if you thought that was strange just wait until you go “nightcrawling”. This mini-game sees you seduce random characters before sneaking into their homes (despite having been invited), knocking out any rival suitors and then pulling the covers off different beds to find them. Things end when you’re invited to a private boudoir, the screen fades to black, a horse neighs and the caption “that was fantastic” flashes up.

These cheap thrills don’t mask the many problems with Way of the Samurai 4. The PS3 version was released in 2012 (the series started in 2002 on the PS2) and no new content has been added despite the long wait. The graphics, whilst not terrible, are nothing to write home about but the fact the framerate is locked at 30 FPS adds to the disappointment. This is very much a port and little effort has been made to adapt it to mouse and keyboard controls: I recommend a gamepad if you decide give the PC release a try. In addition, this title is really just a handful of similar environments which you can move between, so calling it “open world” is overstating it. The game is set over a four-day time span and certain things can only be done at certain times. However, adding time to the game doesn’t work particularly well because it only progresses when you complete the main missions or take a nap on one of the various straw mats dotted throughout the town. On the plus side, the in-game cinematics are quite interesting the first time, particularly thanks to the Japanese voice overs which go some way to making you feel a bit closer to East Asia – that is, until the frankly ridiculous British characters speak in exactly the same way. If mastering a perfect Japanese accent is that easy, I should really take some classes.

Way of the Samurai 4 has a unique style and provides an entertaining play-through. There is a lot of fun to be had by making the most of the customisable options and fully exploring the different missions and alternative endings, but this is no masterpiece and be warned that the game’s style of humour is not for everyone. Ultimately though, there is no need for harakiri and if you like the sound of a quirky samurai slasher then this could be for you.

Way of the Samurai 4 is available on PlayStation 3 and PC. We reviewed the PC version of the game.

Check Out These Film and Comics Before Playing Ghost of Tsushima