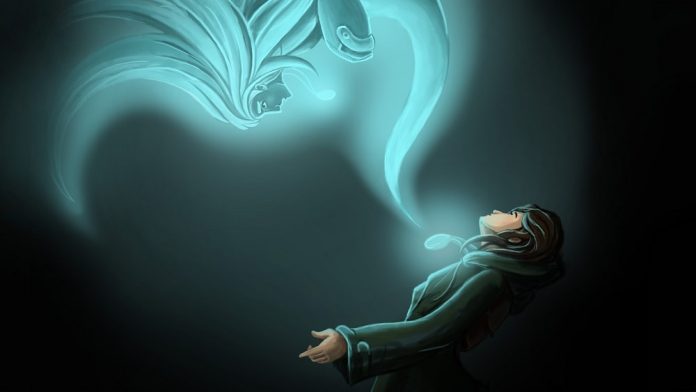 Originally released last year for PC, creepy indie adventure Whispering Willows has now been ported to PlayStation 4 and PS Vita. Though a tale of a haunted house and spirits of years gone by, Whispering Willows is more about puzzle solving than scares.

You play as Elena, a young girl on a mission to find her father, who has recently gone missing in an old, abandoned mansion. With a North American spirit guide at your side, you’re able to flip between your mortal form and your spirit with the switch of a button. As a ghost, Elena can access more areas and interact with the many spectral beings that haunt the grounds of the old mansion, many of whom hold vital information that you’ll need in order to ultimately rescue your father. 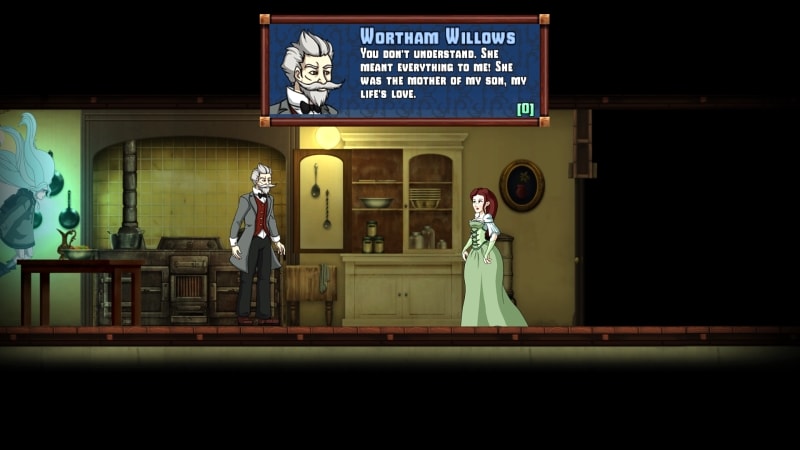 Whispering Willows is easy on the eye, with pleasant cartoon-style 2D animation. The side-scrolling nature of the game takes it back to a simpler time and makes the environments very easy to traverse, meaning it’s difficult to accidentally miss something important.

From start to finish, Whispering Willows takes around three hours to complete, so this is a very short experience.  It’s a steady – and somewhat underwhelming – journey, so if you’re looking for high-octane thrills and edge-of-the-seat scares, you’re not going to find it here. It’s a game of adventure and exploration, purposefully slow-paced to encourage you to explore the mansion and its grounds in your own time. The complete emission of any  kind of combat may be quite an alien concept for some, but personally I welcomed the change of pace.

There are plenty of objects to interact with and ghosts of past residents to talk to, and it’s up to you to figure out what is important and how you need to use certain objects and pieces of information you gather. Yes, it’s a puzzle game, but I use that term very loosely – no part of the game was ever challenging, and whilst that makes it very accessible to all player abilities, it can also make the game feel a little monotonous and boring.  The story that unfolds is interesting enough though, and you’ll find yourself wondering what happened to these former mansion residents to make them so badly need your help in the afterlife. Extra story value can be found in a series of hidden notes and journal entries littered through the house, each telling more of the story of the residents and their untimely demises. 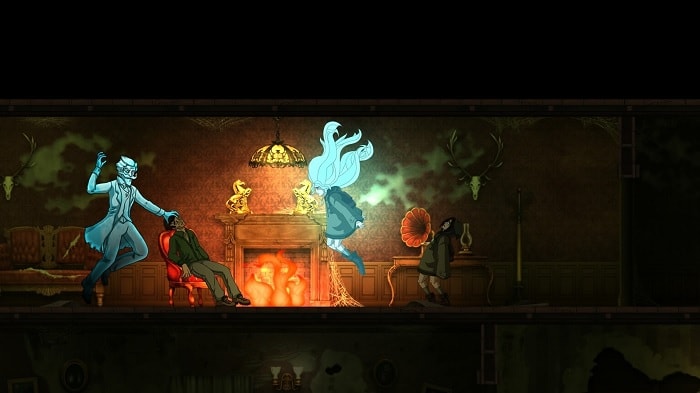 Whilst there is no combat to speak of, Elena does encounter some not-so-friendly spirits on her journey. Deep in the catacombs where you begin the game is where you’ll find your only encounter of note though, as you uncover the resting place of a malevolent ghost that isn’t so happy to have you disturbing his eternal slumber. It’s a quick but panicked fumble to get out of his path, back to the safety of the floor above. Despite being early on in the game it unfortunately doesn’t set a precedent for other encounters; besides a few nasty ghostly creepy crawlies that you must avoid in a couple of locations, there are no other threats to your safety. As the only encounter of note, it feels a little out of place, which is a shame as it provided a much-needed boost of energy to the otherwise sleepy gameplay.

Overall, Whispering Willows is worth a go, especially for those who enjoy a slow, story-driven adventure. Despite its ease and short gameplay time, Whispering Willows has a good story to tell. The emphasis on puzzle and exploration coupled with the 2D side-scrolling presentation is reminiscent of traditional adventure games of the 90s; it’s just a shame that the puzzles in this one don’t offer much in the way of a challenge.

Whispering Willows is available digitally on PS4, Xbox One, PS Vita and PC. We reviewed the PlayStation 4 version of the game.