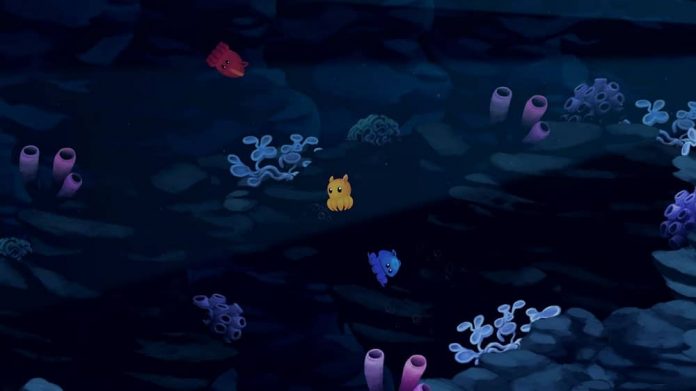 Airscape: The Fall of Gravity is an action platformer developed by a small group of students with a story unlike anything else you’ve played before. It follows the plight of an octopus, lost in a strange and dangerous world, whose friends have been abducted by a mysterious force. The objective of the game is to navigate your way past hordes of dangerous obstacles in various zones, and collect critters (blue orbs) to free your friends. The ultimate objective of these levels is simply to survive and reach the end, but as a bonus, if you collect enough critters, you can unlock bonus missions, whereupon completion you unlock a new octopus as a playable character. Each octopus has a different ability, ranging from hovering to being able to teleport short distances. Unlocking multiple octopi has benefits as it allows you to approach the level in several different ways; some levels are better suited to be undertaken by certain characters, and to this end there’s also a tactical edge to working out which particular skillset is best to tackle the level at hand.

Airscape is a fascinating and original take on the platformer genre, but one that will unfortunately cause a few nightmares. First and foremost, the game looks gorgeous, and it’s complemented by a soundtrack that evokes feelings of mystery, wonder and adventure. The controls are very simple, but this simplicity is deceiving; this is easily one of the most difficult games that I’ve ever played. After an easy first level, you’re thrown into the deep end and left to drown. The levels become progressively more difficult, but since there is hardly an easy level to begin with, there’s a steep learning curve which can be a bit off-putting. Now this isn’t inherently a bad thing; it’s quite refreshing that you actually have to think about what you’re doing and wait patiently for your move rather than speeding through each level without a thought. If you’re an impatient player though, the game is relentlessly unforgiving, and you’ll grind to a halt unless you adapt your play style accordingly. There are checkpoints in Airscape, but not enough. Often you’ll find yourself celebrating after finally triumphing over that obstacle that killed you fifty times, only to die just before you reach the checkpoint. Replaying a significant chunk of the level over and over again quickly becomes infuriating, especially when you’re always falling at the same hurdle. That’s not to say the game should be dumbed down, but it would be far more enjoyable if there were more frequent checkpoints. I often felt relief upon finishing a level, knowing I wouldn’t have to go through it again, rather than the satisfaction that you should feel upon persevering to completion. It needs to balance challenge with accessibility to allow a wider audience to be able to play the game, Even something simple like the option to toggle on or off extra checkpoints would be a better alternative, so more casual gamers can still enjoy the game, whilst players who like an extra challenge could still test themselves.

Despite this major gripe, Airscape does have a lot good going for it, in particular its zany physics. Airscape’s use of gravity is fun to play around with, and it’s an inventive twist on what we’re normally accustomed to in platformers. Granted, the weird physics can make your life hell trying to complete a level, but the developers have to be applauded for coming up with such a unique and interesting system. Another positive is that it isn’t a game that just recycles obstacles and dumps them in a different map for you to beat again; there’s always a different context to the level which means that a different approach is needed in tackling it. Not only does this keep the player on their feet, but it helps keep the game engaging and feel fresh, even when it’s at its most frustrating. Furthermore, all levels can be replayed at any time, which gives Airscape a lot of replayability value. Airscape: The Fall of Gravity has the potential to be a truly great game, but it isn’t there quite yet. The game physics are unrivaled, but unfortunately that doesn’t make up for how testing the game can be. If you’re up for a trial by fire, though, then line right up, because the Dark Souls of the platformer genre has arrived.

Airscape: The Fall of Gravity is available on PC.