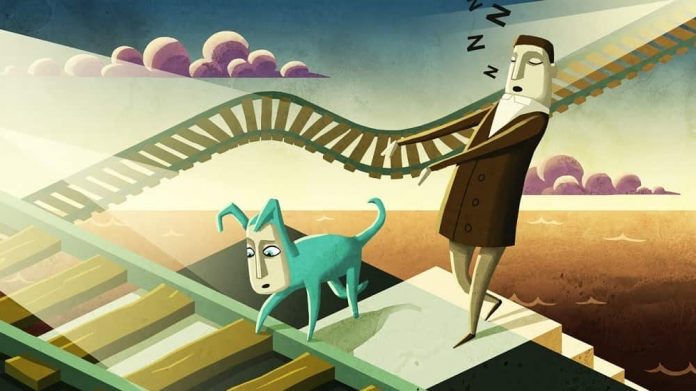 “Bob has narcolepsy,” Back to Bed informs you, via one of its many wondrous pieces of art interspersed between its 30 levels. If I was Bob though, I’d be less worried about my narcolepsy and more concerned about the vivid Salvador Dali-esque dreams I’m having.

You see, Bob sleepwalks in his dreams, and when they are full of fiendish puzzles and nightmarish creatures, who knows what the repercussions could be were he to be suddenly awoken. Luckily for Bob, he has a strange dog-like creature called Subob (eerily sporting Bob’s visage, might I add) that looks after him during these strange forays into surrealism, and with you taking control of this peculiar canine it’s your job to manipulate Bob in order to get him back to bed for a peaceful bout of slumber. With its two-button control system that has you picking up and placing objects with X and fast forwarding time with triangle, Back to Bed is an easy game to pick up and master. In fact, for many, the game’s leisurely difficulty will be its biggest downfall. You’ll probably find yourself watching the credits scroll after around two hours of play, and although nightmare versions of all the levels are unlocked at this point they don’t offer that much greater a challenge, simply giving you the additional task of grabbing a key on the way to Bob’s bed. Obviously some will find the game harder than others, but in general there’s nothing here that’s too taxing on the brain.

Whilst the puzzles aren’t that challenging, they are at least fun. Controlling little Subob, you have to traverse the small environment each level places you in and try to direct the sleepwalking Bob back to his bed, all the while trying your best to avoid environmental hazards and enemies. There are two objects that you can pick up and make use of to achieve this task, which are apples and fish. The use of apples is perhaps the most important aspect of the game as they can be placed in Bob’s path to create a makeshift barrier, forcing him to alter his course. You see, every time Bob is faced with an obstacle in front of him, he’ll turn 90 degrees clockwise and continue his stroll, meaning you’ll have to make clever use of the apples and any other immovable objects in the environment to chart a path to Bob’s bed. On the other hand, if you ever need to get Bob across a small gap, then a fish will be the object of your desire, as they can be placed to create a temporary bridge. The levels start out pretty simple, with you only having to worry about apple placement to get Bob back to bed, but as you progress though the levels more hazards and objects are introduced, forcing you to think on your feet just that bit quicker. There are mirrors that act like portals, air vents that blow Bob off course, pesky walking clocks and scary looking dogs to watch out for, and you must learn to deal with each of them effectively to reach your goal. Generally speaking, the portals and air vents are more of a help than a hindrance as they enable you reach areas otherwise inaccessible without them, so it’s really only the clocks and dogs that pose a major threat to your progress. Thankfully, by utilising the same objects and environmental hazards that you use to manipulate Bob, you can control these troublesome foes to make them plummet off the map or move to an area where they pose little threat to our poor Bob.

Despite Back to Bed’s gentle difficulty it’s hard to not be enthralled by the experience it provides. Its unique gameplay is simple yet captivating and the visuals are simply a pleasure to look at, being clean, striking and full of colour. Its price tag of £14.99 may be a little steep for an experience that may only take you four hours to see everything it has to offer, but it is at least a cross-buy title, enabling you to play the game on PS4, PS3 and PS Vita as you see fit. If you fancy a puzzle game that oozes charm and weirdness, then Back to Bed is the game for you, just don’t expect it to challenge you mentally as much as a puzzle game probably should.